As I type, headlines are scrolling across my screen confirming that the North Korean’s have yet again lobbed a missile over the top of Japan’s northern island of Hokkaido.

When all the common-sense in the world tells you that this entire stand-off is high-stakes posturing and couldn’t possibly lead to conflict, there he goes again, popping another ballistic missile over the heads of Japanese on their way to school and work.

If we continue to take the view that the endgame cannot be war, as the consequences of which are simply too ruinous to fathom, then we should all expect a further deterioration in relations between the US and China and Russia since it is the latter two countries that Trump will see as having not exerted nearly enough influence on the North Koreans.

Trump will ask for more from them.

This week Trump blocked a US$1.3bn Chinese bid for US chip-maker Lattice Semiconductor on the grounds of national security. It seems increasingly likely that we will see more of this tit-for-tat behavior between the US and China in the months to come, spurred on by North Korea’s niggling and Trump’s central view that the US needs to rebalance its trading relationship with China.

With economic growth as strong as it is globally, these issues above are unlikely to derail asset markets materially anytime soon, short of an escalation to conflict.

But they will cap the upside, and clearly are far from welcome.

Elsewhere in the world this week we had the launch of new Apple product (you would have had to have been living under a rock not to notice) and a collapse in cryptocurrencies (Bitcoin was -25% on the week) after comments from JP Morgan’s Chief Executive Jamie Dimon that the ‘virtual currency’ was a ‘fraud’.

Dimon’s comments came after the Chinese government announced the banning of all trade in cryptocurrencies.

Will be interesting to see how this all ends.

We got an early look at the Chinese manufacturing data for September, with satellite imagery showing a moderate improvement this month, despite many headlines this week focusing on data from August which modestly missed market expectations.

Locally, banks rebounded at the expense of miners.

Iron ore fell -7% on the week, and other industrial metals all weakened off a shade as well.

Steel inventories in China have recently begun to rise, buoyed by the strength in steel-maker profitability. Ordinarily inventory doesn’t begin to rise until December at the earliest, so we will see whether there is anything to this small uptick and potentially to wider profit taking in the Australian miners.

Housing – comments from industry leaders point to a softening

We have talked about this a lot in the past 6 months, but it seems like evidence is finally beginning to emerge of a softening in housing market conditions along the eastern seaboard.

With clearance rates nationally bobbing around 12-mth lows at 70%, this week saw national press articles highlighting a significant shift in the attitude of agents and buyers alike across the key Sydney and Melbourne markets.

One article suggested this looked like being the softest spring selling season in 5 years.

Another article, which I’ll admit made me smile cynically, detailed Harry Triguboff’s thoughts that without government intervention, many Australians would lose significant wealth given the rapidly weakening market for eastern city CBD apartments.

Mr Triguboff as most will know has become Australia’s richest man by successfully developing much of the Sydney apartment market, but who has also in recent months, funded a large number of foreign apartment buyers, many of whom it could be speculated may be in negative equity on their purchase prices and thus a credit risk to Mr Triguboff.

It’s that self-interest that, as I say, made me smile wryly.

Adding to the darker mood, UBS published a really interesting piece of research that detailed the outcome of a survey they conducted into the honesty of the Aussie mortgage application process.

The upshot of it all was that more factually inaccurate mortgage approvals than recent years had been approved and that the UBS take on all of this was that bank credit quality was likely worse than the headline statistics might infer.

They ended their remarks by noting a ‘very cautious’ sector outlook.

Nothing you haven’t heard here before, and a key reason why we have been pushing not only an underweight in the Australian mortgage banks, but a significant preference for Macquarie Bank (MQG) as our top pick.

Fortunately for us this week MQG issued a profit update, reassuring investors that it was on track to match its 2017 figures, but building in some potential for a positive surprise given strength in their first half numbers due to performance fee earnings from within the asset management division.

We liked the rhetoric, as did UBS, who were so moved as to up MQG to BUY.

MQG jumped +6% on the week, and still stand well placed for outperformance given the banks significant potential for cost outage.

Another one of our names, HSO saw an upgrade to BUY by JP Morgan this week.

Again, we were early on this one, but we have been recommending adding to positions on this weakness given the lowly valuation and still strong potential for earnings growth in 2019 and 2020 as its recent portfolio expansions mature into profit.

*** Some Positives on the Australian Economy

For anyone who has read this weekly throughout 2017 you’ll be very familiar with my caution around Australia’s housing market, the mortgage banks, and my indifference as to Australia’s lukewarm economic rebound.

I think I have typed the word ‘mixed’, in reference to the local economy, more times than I would have preferred.

But on a positive note this week, we again saw signs of an improving jobs market locally with a jump of +40,000 in full-time employment during August.

I spent much of 2016 and the vast majority of the current year pooh-poohing the local employment recovery on the basis that underemployment remained near record levels and that the impending construction slowdown would further dampen the jobs market into 2018.

However, it must be said that it seems infrastructure spending across the east coast is really having a materially positive impact, and it does feel like engineering and civil construction markets are in full swing, buoyed by road and rail projects in each of Brisbane, Sydney and Melbourne.

The rise in full-time employment last month puts year-to-date growth at around a 3.5% annual clip, which is definitely a positive.

But perhaps even more encouraging to me was the significant jump in participation, with the number of working-age Australians in work or seeking work at a 5-year high. 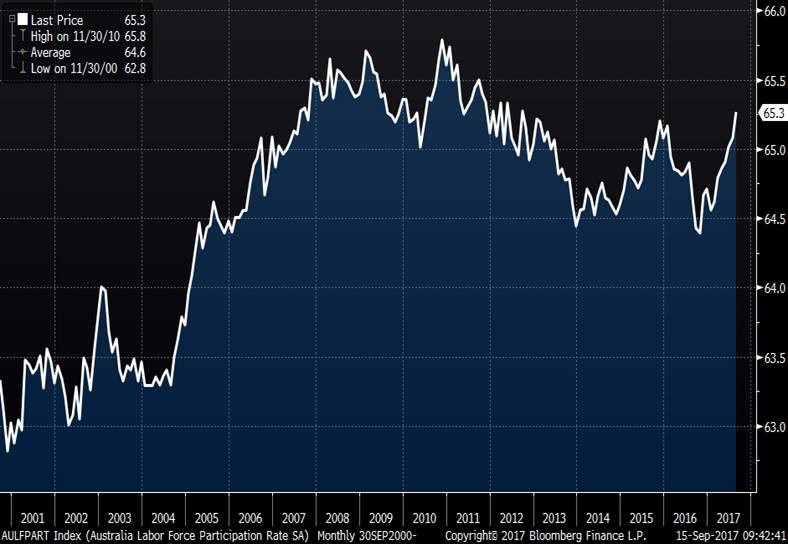 An economy wants as many people employed or seeking employment as possible to maximize its productivity, so the rise in last month’s participation rate to its highest level since 2012 speaks volumes for an increasing optimism in the jobs market.

Perhaps wages really are set to turn higher into 2018.

Also this week we got the monthly consumer and business confidence figures from each of Westpac and NAB respectively.

On the corporate side business conditions remain super strong, but surprisingly the outlook softened up. I wouldn’t lose sleep over this as it is a volatile number.

Consumer confidence bounced a little, but again, it is weak and flighty, so nothing new to say here.

Lastly, we were grateful to SEK management for  sharing an hour with the advisory team on Thursday and covering their recent annual results, but also for shedding some light on group strategy, their foreign operations and the heavy investment SEK are making in data and artificial intelligence.

We walked away thoroughly convinced in SEK’s ability to continue its spectacular growth story over the coming 5-years as it consolidates its leading position in China, and rolls out much of its successful local product suite to recruiters and job-seekers across wider Asia.

We think it remains good value here, but would be specifically sharpening our pencils to buy under $16.

Next week we get the US Federal Reserve announcement on interest rates, and though unlikely to see a rise any time soon, markets will be keen to hear an update as to the impact of hurricane activity on the economy and thus central bank policy.

Next week will also be interesting for context since this week we saw an increasing hawkishness from the Bank of England around rates.

Clearly the response from Trump as to the North Korean missile launch will similarly be closely watched.

Have a great weekend.

For more information on the above please contact, Robert Flynn, Senior Financial Advisor, Bentleys Wealth Advisors directly or on 02 9220 0700.