The first economic data out from China for February came out over the weekend, being the government’s official measure of manufacturing activity.

As the chart below shows, the industrial economy stopped in its tracks in February on account of the spread of the corona-virus and measures taken to quarantine its multiplication.

Sentiment last month was worse than at the peak of the GFC.

Even more interesting was that the Chinese government were willing to share a number this negative as its widely taken that this official data measure is smoothed out by the administration – perhaps its seen as an important benchmark to demonstrate to the population the significance of the decline as a means for gauging the hoped-for success in their recovery efforts as 2020 progresses. 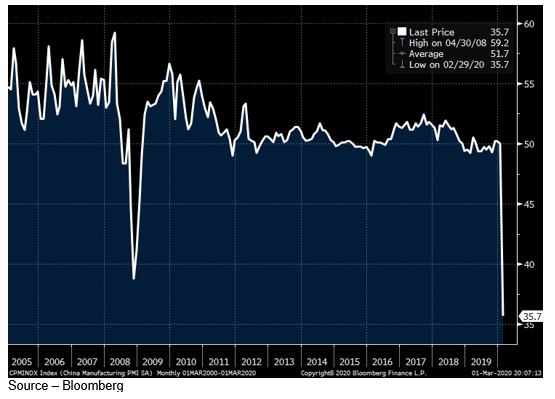 Similar to the official manufacturing data, the chart below shows the privately compiled Standard Chartered Small Medium Enterprise Confidence Index for February, and it too has collapsed in a hole.

Notably the production, profitability and new order indices bore the brunt of the economic impact, with overall confidence falling significantly into negative (which is <50), but still at a level that suggests respondents feel hopeful that the impact of the virus will be short term in nature (confidence only fell to 40.3). 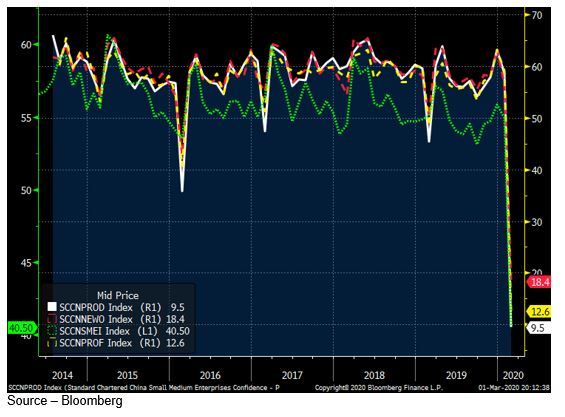 Beyond the day-to-day news-flow on corona-virus infections, markets will pay close attention to the outcome of Super Tuesday’s (March 3rd) Democratic primaries in which 14 states (including California and Texas) will vote for their favoured Democrat challenger and virtually 1/3rd of all the delegates to the Democratic National Congress will be decided.