U.S – China ‘phase one’ trade deal confirmed is a positive to end the year.

The deal should be signed in the early part of January and will ensure the planned December tariff hikes are no longer implemented and that tariffs on US$120bn of Chinese exports to the U.S would be halved from 15% to 7.5%

The deal is good news for a variety of reasons, none the least of which being it shows the two countries are capable of resolving their differences for the greater good, albeit clearly the ‘phase two’ discussions slated for 2020 will be far harder to resolve given the subject matter – U.S intellectual property rights, Chinese state subsidies etc.

Businesses will welcome the partial tariff rollback and the period of certainty this creates.

Australian November Business Confidence eased from the previous month’s bounce, though Business Conditions near term are stabilising. Disappointingly forward orders retreated again in the month after their strong October bounce and interestingly companies remarked that credit availability continued to tighten to the point that conditions were seen as being as bad as they were at the height of the Royal Commission credit rationing earlier in 2019.

Australian Consumer Confidence for November also eased following its October bounce, and remains near enough to a 4-year low.

Nufarm (NUF) shares rebounded to close ended the week +10%, buoyed by expectations for the U.S-China trade deal and a potential doubling in U.S agricultural exports to China.

We noted the extraordinarily low valuation on NUF a fortnight ago when the stock drifted under $5 following its most recent profit warning, and that quite fortuitously for NUF, it would stand to benefit from any trade deal since it is currently in the process of selling its Latin American crop protection business to major shareholder Sumitomo Chemical.

It is expected that in order to purchase the substantial $US40bn+ per annum of American agricultural exports, China might be forced to curb demand for Brazilian commodities.

NUF hence are in the exceedingly fortunate position of having sold their exposure to the main region likely to suffer most from last week’s Phase One trade deal.

We remain of the view NUF shares are worth significantly more than current levels.

Pendal (PDL) shares jumped +10% last week, almost all of which came on Friday after it became apparent the UK’s Conservative Party would win the National Election there in a landslide and thus set the country on a path to official BREXIT.

PDL’s UK funds management franchise JO Hambro contributes almost 75% of group earnings and will benefit from both the rise in GBP for AUD earnings, but also from a likely renewed interest in investment in the British economy and FTSE share-market following the Conservative election win.

We have long felt PDL to be a particularly cheap share and are encouraged by the strong rebound seen last week.

PDL still trades significantly cheaper than other major funds management group’s and should see earnings improvement in 2020 on account of the more positive outlook for the GBP and British economy.

Webjet (WEB) shares rose +8% on the week after the company posted an ASX-announcement confirming that from time to time it entertained informal takeover talks with interested parties, but that none were at present ‘live’.

It was an interesting announcement given that there had been precious little speculation on this front other than an AFR article on the day suggesting that investment bank Goldman Sachs had been touting the stock as an M&A candidate to local private equity groups.

Clearly, we believe the stock to be an attractive holding at present and welcomed the speculation.

The chart below is a bemusing one.

It shows the spike in U.S Small Business expectations for future compensation plans (in white) from the recent Small Business Confidence reading, and beneath it in red, is the U.S Employment Cost Indicator – a measure of U.S annual wage growth.

With the U.S unemployment rate of 3.5% at its lowest level since the 1950’s it shouldn’t be a surprise to see wage pressures building, but it flies in the face of much of the concern we and others have had in 2019, which as to worry incessantly about the impact of trade wars on global growth.

In actual fact, the trade war DID decimate global industrial production, but the interest rate cuts made to offset slowing global trade has helped to bolster U.S consumption as an offset, leaving U.S labor markets still tight as a drum.

With a path to BREXIT now clear, and the initial U.S-China trade deal done, it seems highly likely businesses will commence 2020 with some more certainty on trade and perhaps that will elicit a rise in business spending that was sorely missed in 2019.

The chart below suggests that the biggest risk for financial markets in 2020 could well be an overheating in U.S growth, not the recession that was so often forecast in 2019!

U.S Wages growth could be the surprise of 2020 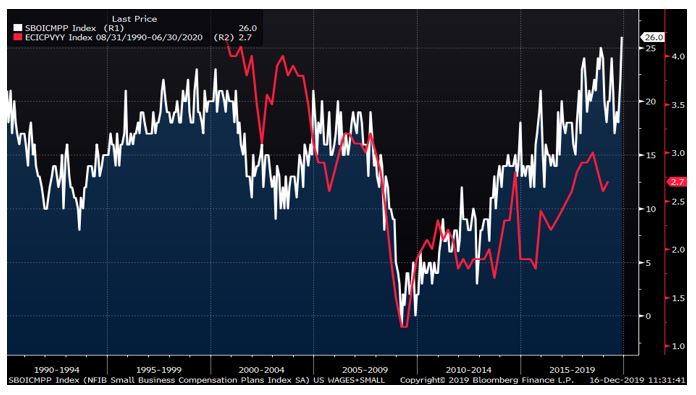 Beyond the economic data and AGM’s this week, the US Federal Reserve meeting Thursday morning AEST and the UK Election on Thursday night AEST will clearly gain some attention.