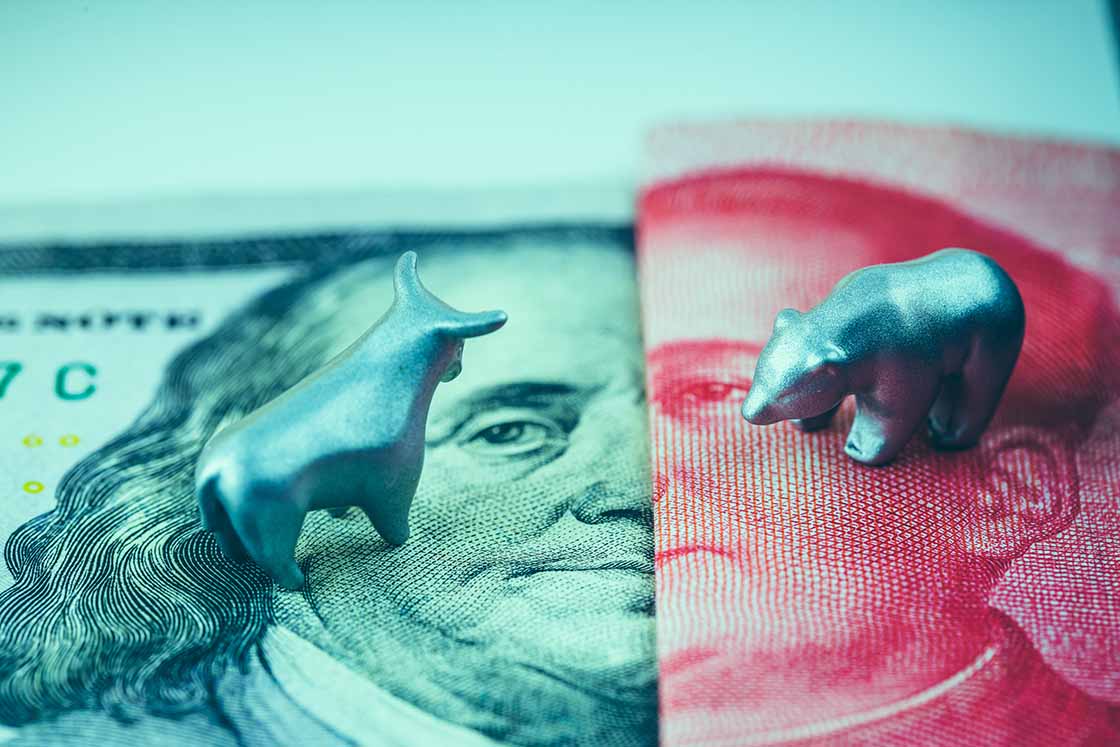 Tariffs were levied on additional US and Chinese exports to each’s respective countries over the weekend, further escalating tensions and showing we remain well apart from any tangible and worthwhile agreement.

Currency moves are increasingly an issue as the US Dollar continues to push towards a 2-year high and the Chinese RMB has now drifted to a decade low.
Reports out of China on Friday suggest a very strict interpretation of regulations pertaining to offshore RMB transfers, suggesting that Chinese citizens were unable to wire funds offshore for real estate or insurance product purchases and that even offshore transfers for education would require specific forms showing proof of study.

Australian Building Approvals for July fell again, down -10% on the month and down almost -30% annually, ruining the past couple of months stability in absolute terms.

We believe private house approvals will bottom out before the end of 2019 given strong auction clearance rates, however tangible improvement in construction activity is unlikely to land until mid-2020 at the earliest.

China August manufacturing activity was released over the weekend and remains soft.

Services sector activity continues to support the economy, but it seems apparent that the trade war is having a significant impact on the wider economy.

Afterpay jumped +25% last week after reporting profit terrific operating momentum across the board, and arguably delivering higher subscriber growth than some of the analysts had forecast.

At current growth rates, APT is adding over 12,000 users a day and will add near 4.5m users in the coming 12 months – effectively doubling the current subscriber base

At this very early stage in its life cycle, the UK start-up has grown faster than the U.S.

APT believe there is an addressable retail opportunity across the 3 key markets (ANZ, US and UK) of US$6tln which leaves them with <1% market share still.

The other huge positive to be revealed in the numbers was that APT have noticed that those using the platform for longer, tend to use it more often, meaning that as the user base matures, intensity of use will increase providing even higher growth.

Despite all the positives, costs will continue to rise to further fuel the growth and for that reason the stock still looks like heavy going in the $30 – 35 range.

We love it but would only be adding more in the low $20’s should it land there.

IOOF profit figures were fine and hard to quibble with.

We are slowly working our way towards some certainty, with the $230m of likely remediation expenses for inappropriate advice now announced.

We expect to learn on the ANZ Wealth deal before the end of October and at that point we feel the share has the chance of grinding higher at worst, or surging ahead at best, assuming a deal is confirmed and potentially even at a cheaper price.

Should the ANZ deal drop then IFL is on well under 9x and with a rocket to $6-7.

We remain optimistic that the risks in IFL are asymmetric to the upside.

Webjet became one of our preferred stocks last week with the share price fall back to $12 too hard to ignore.

WEB downgraded expectations for the current year at their results, citing less wholesale business from their key Thomas Cook account and a lower base from which to grow earnings given the softness of the previous year in both Europe (hot summer) and Australia (election-induced consumer weakness).

We think this provides a reasonable base from which to set 2020 earnings and believe that 15-16x current earnings for a business likely to grow 10-20% for the foreseeable future is too good to pass up, particularly with the strength of management and balance sheet this stock possesses.

Woolworths shares, quite incredibly, managed to rally after their results despite a significant lack of operating leverage flowing through the group.

Furthermore, the underlying profitability of the liquor business fell -10% on the previous year and is hardly a business demonstrative of a business investors are likely to mark higher than WOW’s current 26x multiple on divestment.

In fact, WOW is now the most expensive global food retailer on 26x which is ridiculous.

WOW is even more expensive now than it was 5 years ago when it was dominating the category and possessing of world leading 8%+ food margins.

The spin out of the hotel and liquor business will surely lead to a de-rating of WOW shares and frankly we think the stock at $37 is absurdly overvalued.

Boral shares were initially smashed on their poor guidance for 2020, however as the week drew on, the shares managed to recover to be down around -13% for the week.

There is no doubt the 2020 guidance was a disappointment, as was the individual operating performance of the controversial fly-ash division, Headwaters, purchased at great expense only 2 years before.

However in the mid-low $4 range there is a huge amount of pessimism priced in if you believe that the Australian residential construction cycle is set to bottom in the coming 6-9mths (we do) and if you believe the record low US bond rates will transfer to continued demand for new mortgages and subsequent housing  start growth.

We think BLD shares are likely headed above $5 over the remainder of 2019 and would be adding to the stock in the low $4’s again.

RWC have guided for continued growth in 2020 and investors seem far more comfortable with the underlying organic sales momentum within the business and particularly with their key retail partners Lowe’s and Home Depot.

We think this is a really high-quality industrial stock and are hopeful we see it back into the mid-$4’s and on a P/E pushing 20x again before too long.

The U.S share-market is the last remaining bull-market as the chart below shows.

The chart shows all of the major equity indices in constant currency form (U.S in red, Europe in blue, China in yellow, Australian in green and U.S small-caps in white) and normalizes them from the 1st January 2018 near when several of them last peaked.

Even U.S small caps have failed to participate in the rally, with that index peaking mid 2018 and down around -12% from then. 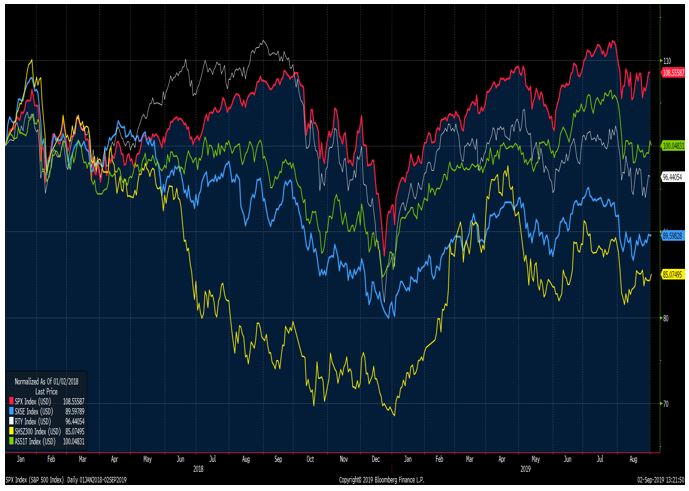