Equities continue to rebound with another week of gains while bond markets were mixed as the surge in commodity prices stalled. The MSCI World rose 0.4%, led by a rebound in European equities, while China led the MSCI Emerging Markets’ 1.8% bounce. The S&P 500 lagged with a 0.1% gain for the week.

The S&P/ASX 200 was an outperformer, rising 1.2% as iron ore prices rallied 6.7% to drive Materials 3.6% higher for the week. Tech continued its rebound, rising 1.2%. Meanwhile, Energy (-1.3%) was the laggard as the U.S. announced that it would be releasing a further 1 million barrels of oil per day for 6 months from its Strategic Petroleum Reserve in the effort to combat surging energy prices, driving Brent Crude 14.7% lower to end the week just under USD105 per barrel.

Australian 10-year government bond yields rose marginally to 2.82% but the U.S. 10-year Treasury yield fell back below 2.4% despite continued strong employment data. Job openings remain abundant in the U.S., continuing to indicate a strong labour market, alongside a solid employment report as the U.S. unemployment rate fell to 3.6% while the people are returning to the employment market as the participation rate rose again.

Inflationary pressures remain as European CPI came in at 7.5%, blowing past consensus estimates of a 6.6% rise over the previous year. However, much of this was driven by the rise in energy and food prices due to the invasion of Ukraine, with core CPI coming in at 3% versus the 3.1% consensus estimate. Core CPI excludes the effects of energy and food. Manufacturing Purchasing Manager Index (PMIs) surveys for Europe, U.S. and Australia indicated slowing but still growing activity levels, but also further price and supply chain pressures.

Over to China, lockdowns continue as the government’s zero COVID strategy remains in place. As a result, the PMIs for both manufacturing and non-manufacturing activity fell below the key 50 level indicating contraction. With further lockdowns likely as new cases remain high, it remains to be seen how the government will look to achieve its 5.5% GDP growth target for the year. This will also have flow-on effects to the rest of the world as supply chain issues and inflationary pressures are exacerbated.

Looking ahead, the Reserve Bank of Australia has a policy meeting and markets will be watching for any guidance on the timing of a rate hike. We will also see ANZ’s job advertisements survey and the Services PMIs for Europe, U.S. and Australia.

Resources a boon for Australia but China presents a risk

Australian equities have been a top performer so far this calendar year. The S&P/ASX 200 is up 2.2% in 2022 while the MSCI World and S&P 500 are both down over 4%. Much of this has been driven by the domestic index’s much larger exposure to the resources sector, with Energy and Materials the best performers year-to-date, while the relatively small weight in Tech, down 14.5% as the worst performing sector, was another contributor.

Resources have been a beneficiary of multiple drivers over the past few months, initially as global travel starting to reopen in earnest helping to drive energy commodities higher while metal prices benefitted from a surge in demand for goods, renewables and infrastructure. More recently, the Australian resource sector has benefitted from the tragedy in Ukraine as Ukrainian production is disrupted and sanctions, both official and unofficial, on Russia, a major producer of a broad slate of commodities, have driven prices higher.

While we remain positive on resources and retain a preference for Australian Equities over global, the risks to this view are rising.

A key factor for commodity prices over the last two decades has been China. China remains the largest consumer and importer of many major commodities.

China is in the midst of a property downturn as it looks to de-leverage the sector that is a huge consumer of steel. Furthermore, China has recently reiterated its commitment to its zero COVID strategy and, as mentioned above, the government continues to implement strict lockdowns, driving key economic indicators into contractionary territory. The dotted red line in the chart below marks the neutral level, readings below indicates contraction. 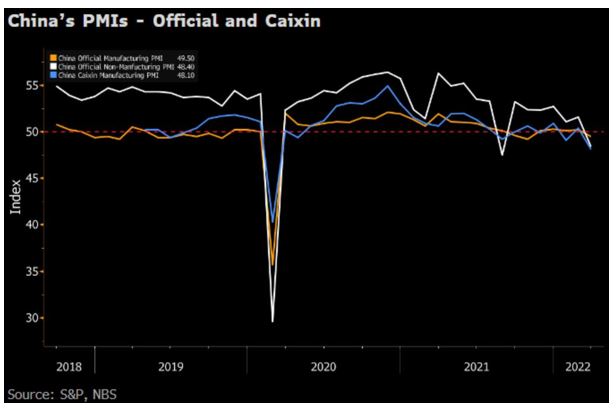 While the outlook has deteriorated, the government still has many levers to stimulate a rebound and support economic growth including further cutting key interest rates and increasing fiscal spending on infrastructure. Importantly the market is also expecting commodity prices, especially in iron ore, to fall, therefore, valuations remain undemanding and we continue to see opportunities in the sector. However, the potential for a further slowdown of China’s economy represents a risk to the outlook for Australian equities, given the nearly 30% exposure to resources at the index level. We will continue to closely monitor developments in China’s economy to inform our positioning here.