Markets continue to rebound as July proved to be a great month for investors. The MSCI World rose 3.5%, led by the S&P 500’s 4.3% rise last week as a better-than-expected reporting season and a fairly upbeat outlook from big tech companies helped to ease fears of an earnings cliff. The themes so far from the U.S. reporting season are that consumer spending remains resilient but the strong currency is proving to be a significant headwind for many multinational companies. Emerging markets fared worse as Chinese equities fell amidst a lack of further stimulus and Alibaba being added to the list of potential U.S. delistings.

The S&P/ASX 200 rose 2.3% as resources rebounded. Materials (+4.9%) and Energy (+3.4%) were the best performers, with a slate of production reports from miners proving less negative than in recent weeks. Lithium exposures were a particular bright spot, with our preferred names, Mineral Resources (MIN) and Independence Group (IGO) both releasing positive updates. Financials (+2.5%) also fared well as Macquarie (MQG) held its AGM and indicated a better-than-expected start to their fiscal year, albeit maintaining its cautious outlook. Healthcare (-0.8%) and Discretionary (-0.7%) fared worst.

Bonds continued to rally as yields fell again despite another 0.75% hike from the U.S. Federal Reserve (Fed), bringing the benchmark interest rate to 2.25-2.5%. The U.S. 10-year Treasury yield fell to 2.64% while the Australian 10-year Treasury yield took a big leg down to 3.06%, falling 0.38% for the week. Falling yields drive higher prices for bonds and were likely driven by the Fed’s commentary acknowledging that the economy has softened but not recessionary and that there will be a point where the Fed slows hikes to assess impact. Another fall in U.S. GDP may have also pressured yields lower, with the reading of -0.9%, defying consensus expectations of a 0.5% rise and resulting in a technical recession, though an official recession would need to be declared by the National Bureau of Economic Research.

Other U.S. data was also mixed, with the Fed’s preferred inflation gauge, the Personal Consumption Expenditure reading, in-line with expectations, while weaker than expected consumer confidence was offset by stronger than expected spending data. Preliminary readings of European inflation were also higher than expected again, hitting 8.9%, while GDP likely grew 0.7%, well above the 0.2% consensus. In Australia, the headline inflation reading was 0.1% lower than consensus at 6.1% but the Reserve Bank of Australia’s (RBA) preferred gauge, the trimmed mean reading, was 0.2% higher than consensus at 4.9%.

The RBA is expected to hike rates by 0.5% again this week and the market will be watching for any potential forward guidance. Purchasing Managers Indices (PMIs) will also be released for the major economies while U.S. employment data are the headline event at the end of the week.

Is the inflation threat over?

Markets are rallying on the notion that central banks are close to the end of the hiking cycle and will need to move quickly to cut rates shortly after. While it is likely that we have reached or are close to reaching peak inflation, implying that inflation will moderate in the coming months, the more pertinent questions for central banks (and therefore, markets) is how quickly will inflation fall and where will it settle at. The outlook here remains murky at best. 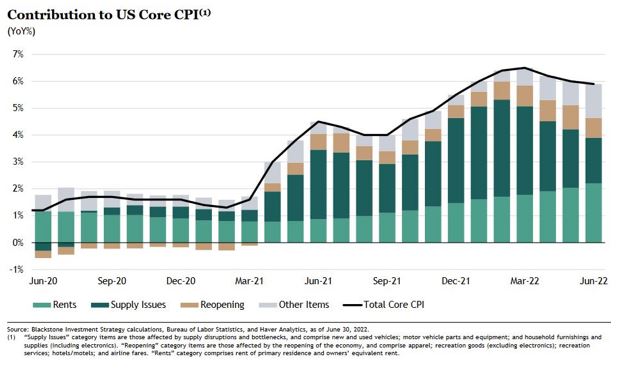 For example, in the U.S., supply chain issues are now moderating as demand for goods have moderated, inventories have been restocked and companies are starting to adapt to the disruptions from China’s lockdowns and the Russian invasion. However, inflation is increasingly being driven by longer term drivers, predominantly rents. Rents and services inflation tends to be more sticky which could prove troublesome for the Fed and the market. 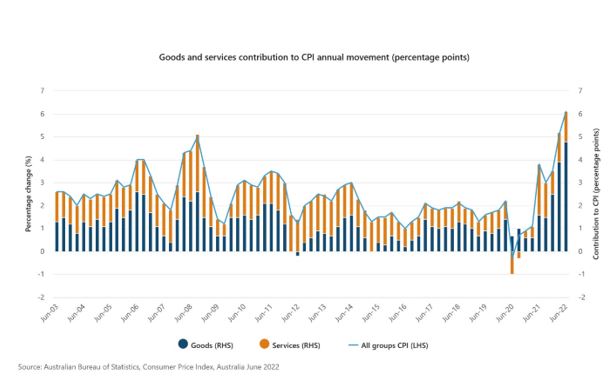 The picture is less clear in Australia as inflation has, thus far, been less rampant. Rising cost of goods have also been a much bigger component of the recent elevated readings, while services inflation remains at reasonable levels. While it may prove to be wishful thinking, domestic inflation could fall back to a reasonable range quickly as supply chain issues moderate.

For investors, given the U.S. remains the major driver for global markets and inflation potentially remaining stickier than expected, the recent buoyancy of stock and bond markets may not last. Therefore, the recent bottom in June may just be A bottom and not THE bottom. As a result, we remain cautiously positioned for now but continue to advocate for remaining invested as history has shown that predicting tops and bottoms on a consistent basis is an impossible task.