It was another volatile week for equity markets worldwide as investors digested interest rate hikes from Central Banks and assessed their commentary and forward-looking projections.

The ASX200 fell 3.1% over the week, with the Small Ordinaries index down 5%. All sectors were in the red over the week, with Energy and Utilities the best performers. The interest rate sensitive REIT (-8.2%) and the Technology sectors (-6%) were the laggards.

The US S&P500 Index fell for a fifth consecutive week finishing down 0.2%. The relatively benign fall masks the volatility that the Index experienced, with the market up over 3% on Wednesday after commentary by Fed Chairman Powell ruled out any 75 basis point hikes. However, by Thursday, the market fell 3.6% as concerns about the economy returned to the fore.

Bond yields continued to rise, with the US 10-year yield crossing 3% for the first time since 2018, on the back of the Fed hiking rates by 50 basis points. The 10-year ended the week up 23bps at 3.12%. This represents a rapid rise from the start of the year when the 10-year yielded 1.51%. The Fed also signalled two more 50 basis point rises at the next two meetings. Quantitative tightening will start at $47.5 billion per month before increasing to $95 billion per month, ramping up over three months, a slightly slower rate than the market had anticipated.

The Australian 10-year government bond yield rose 34 basis points to 3.47% on the back of the RBA raising rates 25 basis points to 0.35%, when many economists had tipped a smaller 15-point increase. Their commentary was also more hawkish than expected, stating they will “do what is necessary to ensure inflation in Australia returns to target over time”.

The Bank of England raised rates by 25bps for the fourth consecutive meeting and warned that inflation would reach 10 per cent and the economy would shrink later this year. This is at the same time as British households are dealing with soaring food and energy costs. The services purchasing managers index (PMI) fell to 36.2 in April in China. It demonstrated that sweeping lockdowns are materially impacting service sector activity.

For the week ahead, US inflation is a key headline, expected to show moderating growth with commodity prices cooling over the month. Australian retail sales and business confidence will provide further data on how the local economy is tracking. Meanwhile, China will release updates on inflation, trade, and loan growth, all of which are expected to weaken significantly due to ongoing lockdowns.

Last week, US job figures showed the US economy added 428,000 jobs in April. The unemployment rate was steady at 3.6 per cent, and average hourly earnings rose. The reading indicates that labour demand remains high. Job openings and people quitting jobs are at record highs as businesses fight to attract employees to keep up with consumer demand.

The chart below demonstrates that nearly two job openings exist for every unemployed person, the highest reading in the last 20 years. A scenario few could have predicted during the depths of Covid. 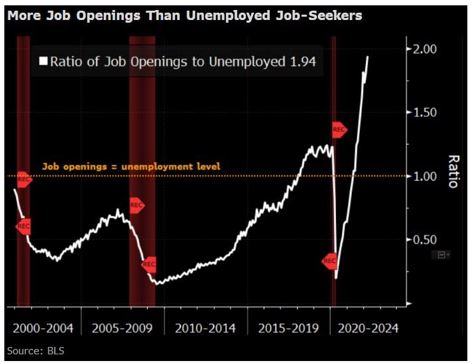 With workers in short supply, businesses increases wages to attract workers to fill openings. Workers also demand higher wages to keep you with the cost-of-living pressures, forcing firms to increase their prices to cover these higher expenses. Some economists fear this dynamic could lead to the dreaded wage/price inflation spiral where further price increases result from higher wages. Such a scenario would make the Central Banks job of taming generationally high inflation more challenging.

So far, wages have failed to keep up with the high level of inflation. In April, while wages did rise 0.3% over the month, this was slower than had been observed in recent months. Also, early signs suggest that the US labour market tightness may be peaking. The following graph shows that fewer small business owners are reporting there are no qualified applicants for a job opening, although still historically high. Also, fewer businesses are planning to raise employee pay in the next three months than in recent peaks. 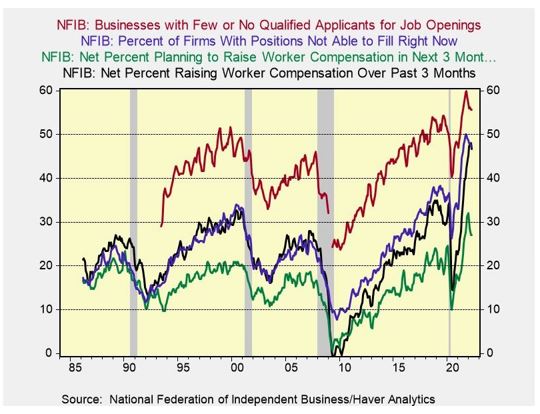 The US labour market developments will have wide-reaching implications for the Fed controlling inflation. If the peak is already in for labour market tightness, the Fed may not hike rates as much as the market is pricing. This would be a net positive for the equity market, provided that the Fed can engineer a soft landing for the economy. However, this outcome is still hugely uncertain, and we continue to have a modest tactical underweight to equities.