Equities rose last week with the S&P/ASX 200 up 0.8%, led by materials and other cyclicals as tech slumped despite bond yields heading lower. In the U.S., the S&P 500 rose 1.3% whilst the MSCI World rose 1.1% for the week. Iron ore hit new record highs over USD $200 late last week, helping to drive gains for the likes of BHP and Rio Tinto (RIO).

The Australian economy remains strong, with the ANZ job ads survey showing an 11th straight month of increases and the Reserve Bank of Australia upgrading economic forecasts for 2021.

In domestic corporate news, many companies provided trading updates over the week. Results were largely positive, with Westpac (WBC), NAB and ANZ all reporting strong results. All three saw a strong recovery in cash earnings, some reversal of bad debt provisions, strong capital reserves and a recovery in dividends. On the negative side, all three continue to see net interest margins fall, crimping the profitability of their core lending business. Markets sold down NAB and ANZ post results as guidance failed to provide further catalysts for re-rating and cost guidance disappointed relative to WBC’s big target at the start of the week. We continue to see the three banks as slightly undervalued, with all three trading at huge discounts to Commonwealth Bank.

Outside the big banks, Amcor (AMC) posted another strong update and raised guidance yet again, with adjusted earnings per share now expected to grow 14-15% for the financial year. The raise was driven by better-than-expected progress on synergies from its Bemis acquisition and volume growth remaining solid. We continue to like AMC and believe it continues to be undervalued.

Bapcor (BAP) also released strong figures at its trading update, noting that it continues to benefit strongly from the COVID driven shift to more cars on the road. BAP has been in a trading range for much of the past 6 months despite continued strength in its business. Currently sitting around the lower end of the range after a sell-off in small-mid caps last week, we retain a positive view on BAP and expect that the market will reward its strong operating performance in due course.

Coming up this week, the Federal Budget on Tuesday night will be the headline event, but we will also see business confidence and consumer sentiment as well as U.S. inflation figures.

The huge miss contradicts all the recent positive data from the U.S., so is the U.S. recovery in danger of being derailed?

The chart below shows the U.S. jobs market is strong. Employers are hiring across all sectors, and many have complained of a shortage of workers. 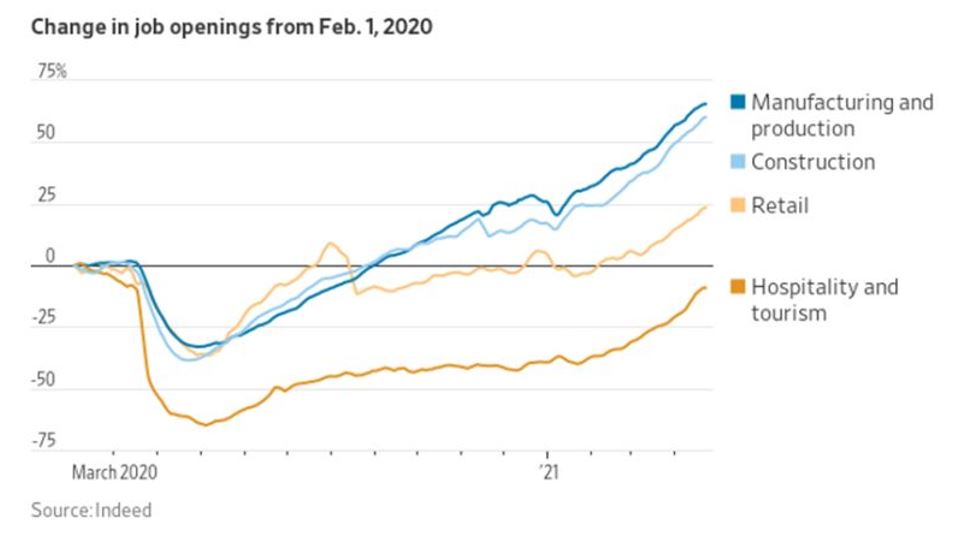 Given the above, we should have seen much better employment figures. Post the big miss, some have returned to the argument that the temporary additional unemployment benefits are too high, leading many to turn down lower wage jobs. Another issue is the mismatch between candidates and skills, bringing up the key issue of the need for a training and education program to re-skill workers.

These factors could be another source of cost push inflation, raising the next question of whether inflation will be transitory as most central banks and the consensus expects. Indeed, average hourly earnings rose more than expected in April. At this stage, higher commodity prices and input prices have not yet impacted the core inflation readings, but wage pressures may tip the balance.

A faster than expected rise in inflation could pose a danger to investors via higher yields or forcing central banks to act earlier than expected. This would be bad for both bonds and equities given the recent dependency on easy money to support high valuations. Whilst this is not our base case, we remain vigilant of this risk, supporting our preference for miners as commodities serve as a hedge against risks in inflation.