Equities fell as concerns over the global economy started to dent confidence. The S&P/ASX 200 fell 1.55% with resources pacing declines. The S&P 500 fell 1.7% after posting declines in all four days of the shortened trading week.

Bond yields rose marginally despite equity weakness and economic concerns. As outlined before in our newsletters and commentary, barring a major downturn due to a policy misstep or renewed global lockdowns, both of which we think are unlikely at this stage, bond yields are likely to move higher in the medium term.

The Reserve Bank of Australia (RBA) will press ahead with plans to begin reducing its bond buying stimulus to $4 billion a week despite COVID-19 lockdowns hitting the economy. However, it has delayed considering any further tapering until next year until at least February 2022, reflecting the delay in the economic recovery and the increased uncertainty associated with the Delta outbreak. The announcement was met with a mixed response from markets as there was some expectation for a potential reversal of the taper, though the push back of another review of the program scheduled for November indicates that the RBA will be flexible in maintaining support.

Over in Europe, the European Central Bank (ECB) has also started to reduce support ever so slightly, announcing a reduction in bond purchases under their pandemic emergency purchase program. The ECB was careful in its wording as it seeks to avoid causing any kind of panic, calling it a recalibration rather than tapering. It highlights both the perceived heightened sensitivity of markets to liquidity but also the heightened sensitivity of central banks to market movements. Both are concerning in the long-term and begs the question as to whether global interest rates can move to a higher level without sparking significant volatility.

On the economic front, there were two interesting points of data. In the U.S., job openings data showed that there were now more than 2 million more job openings than the number of unemployed people. Though the participation rate (and the number of unemployed people) should rise in the next few months as remaining pandemic support payments have rolled off, it is still an interesting anomaly as U.S. employment data has remained weak. It continues to indicate the imbalance either caused by a skills mismatch or unsatisfactory wages in certain segments, most likely both. The other point of interest was Chinese trade figures, with both imports and exports remaining much stronger than consensus expectations despite the slowdown in the economy. Again, it continues to indicate an imbalance owing to global supply chain issues and a gap between manufacturing production and demand. One can look to the continued drawdown in auto inventories as a prime example of this issue. Both points indicate that the transitory inflation debate is not over yet and we expect volatility to come back into bond markets in the coming months.

There will be several key economic data points released this week. Domestically, August employment figures are likely to be weak along with business and consumer surveys. Globally, the U.S. and Europe will post inflation figures, plus China will release its monthly fixed asset investment, industrial production, and retail sales data.

Will the post-lockdown consumer boom repeat?

With Sydney and Melbourne enduring another round of prolonged lockdowns, some are potentially calling for a repeat of the boom in consumer spending that we saw after the last round of lengthy lockdowns. That boom has boosted the consumer discretionary sector of the S&P/ASX 200 to one of the best performers over the past year.

The consumer boom stands in stark difference to other recessions whereby consumers tend to tighten the purse strings. It was brought about by a combination of fiscal stimulus such as JobKeeper and higher savings due to lack of alternative spending options such as travel and dining. As a result, disposable income actually grew during the pandemic recession, and savings rates shot higher. After an initial adjustment period, consumers started spending heavily on the likes of electronics and furniture, boosting the coffers of companies such as Wesfarmers, JB Hi-Fi and Harvey Norman.

We think that expectations for a similar boom this time around would be optimistic. Several considerations factor into this. Fiscal support is not as generous for this round of lockdowns, savings rates are unlikely to benefit as heavily as before as restrictions such as international travel have remained in place so spending behaviour will not be as heavily altered, and the bulk of spending may not have such a short life cycle. To clarify the last point, it is unlikely that a TV, gaming console, couch or coat of paint will need to be replaced within 12-18 months. The first two points can be seen in the chart below. 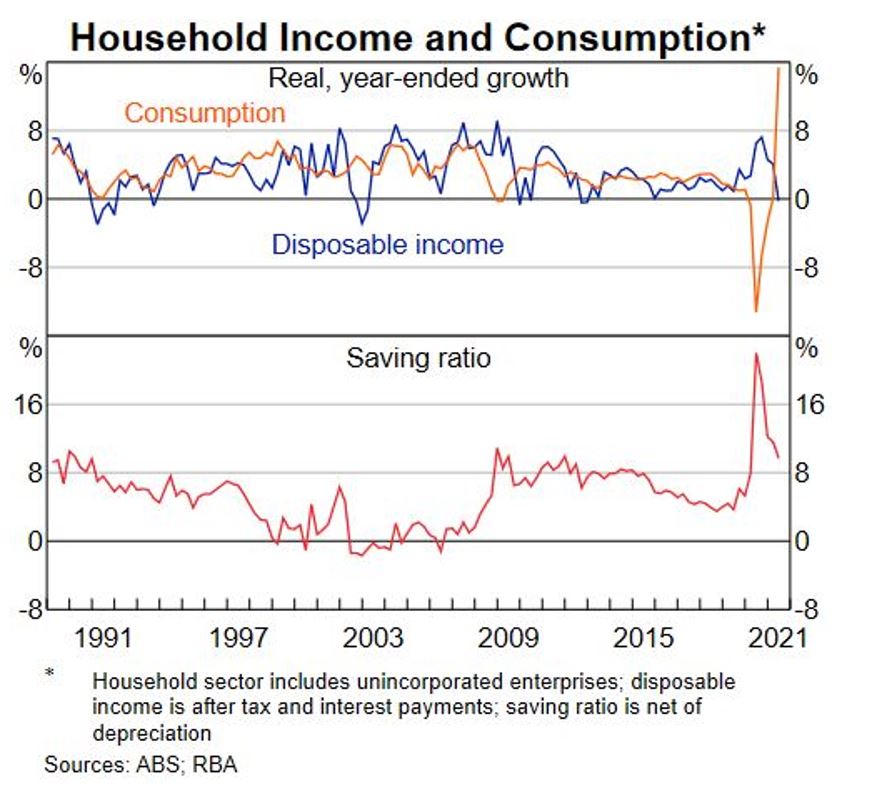 The market seems to have taken the same view. The consumer discretionary sector had a raft of strong results relative to consensus during the recent earnings season. However, the sector has trended lower since, with expectations for the 2022 financial year trending lower and stock prices following suit.

On this view, we have taken a preference for businesses with more defensive earnings profiles or ones that have growing international earnings streams over those primarily exposed to domestic earnings streams for the discretionary sector.