After a brief breather, markets have resumed their falls as the European Central Bank (ECB) and Reserve Bank of Australia (RBA) both made hawkish tilts, exacerbated by U.S. inflation surprising to the upside and making a new high for the year. The MSCI World fell 4.3%, driven by a 5% fall in the S&P 500 while the S&P/ASX 200 fell 4.2%. Growth stocks and cyclicals both fell hard while defensives outperformed as inflation and recession fears took hold.

Losses on the S&P/ASX 200 index were driven by a broad sell-off in banks as Financials (-9%) was the worst performing sector, followed by the ongoing sell-off in Tech (-4.8%) and Discretionary (-4.4%). Defensive sectors fared better with Utilities (+0.5%) and Healthcare (-0.2%) outperforming on a relative basis. Energy was the standout sector with a 5% return for the week as oil prices remained firm. The banks were beaten down as the RBA surprised markets by hiking 0.5%, sparking fears of mortgage trouble for the domestic lenders. This will depend on how high the RBA hikes to, and while possible, we do not think that the RBA is willing to cause a major housing downturn which would likely lead to a deep recession. The issue is that the RBA may not be able to strike the right balance and history is littered with unintended consequences of central bank action, including the most recent bubble driven by ultra-easy money.

Bond yields spiked higher as U.S. inflation came in above consensus at 8.6% year-on-year as energy costs re-accelerated and stickier components like shelter continue to push higher. The ECB also said that it would hike by 0.25% at its next meeting and is considering a 0.5% hike at the following meeting which would take the European benchmark rate back to positive territory. The U.S. 10-year ended the week near the year’s highs at 3.16% while the Australian 10-year rose to 3.67%.

On the more positive side, Chinese producer price index (PPI) saw some moderation to 6.4% year-over-year versus last month’s 8% reading. This could indicate that price pressures on goods may be moderating. Better than expected trade data from China also pointed to potential easing of supply chain issues but these were buffeted by news of areas of Shanghai and Beijing being placed into lockdown again, just a few days after officially reopening.

The U.S. Federal Reserve’s policy meeting headlines this week as the market is now pricing in some potential of a 0.75% hike after last week’s blowout inflation number. U.S. PPI and European CPI figures will also be closely watched along with China’s industrial production, retail sales and fixed asset investment data.

Locally, the unemployment data for May will take centre stage, while the NAB business survey and Westpac consumer survey will provide some guidance on domestic sentiment.

Hope that we had seen the peak of inflation in March were dashed as the latest reading saw a new 2022 high for the year-on-year print. This sparked another round of sell-off. The difference this time was that, while growth sectors were still worst hit, many of the cyclical sectors were also hurt badly including financials and resources that had previously proved relatively resilient.

This indicates to us that fears are shifting away from just valuation compression into earnings recession. As we flagged a few weeks ago, earnings are still expected to grow in 2022 but we believe that the consensus is being too optimistic in the face of rising costs and slowing demand.

The major concern for markets is that inflation remains stubborn and central banks are forced to continue hiking to a point where it restricts demand by too much and results in a recession. While interest rates are still at low levels and there is still time for inflation to moderate, the lack of moderation as time passes raises the risks.

As we see in the chart below, sticky inflation remains elevated above the 0.2% to 0.3% monthly level that represents the Fed’s target range. While the remaining contribution has been a bigger driver of inflation, this segment should moderate unless oil prices continue to push higher and supply chain issues worsen. 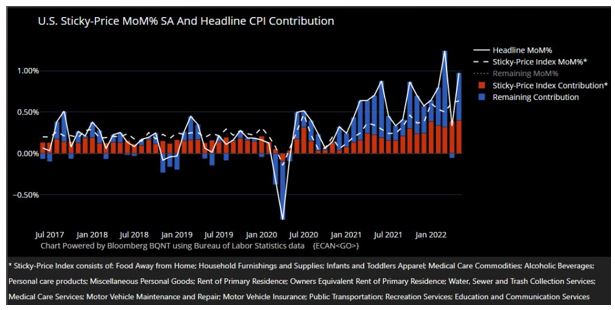 We will be watching this closely alongside a range of other indicators, but as it stands, elevated sticky inflation gives us cause to remain cautious as central banks continue to be forced to tighten and the economic slowdown is more likely to turn into recession.