The S&P/ASX 200 was up 0.8% for the week as travel and smaller companies drove gains. Travel stocks surged on the back of the government’s announcement for further support to the tourism and travel industry, with certain flight routes subsidised for domestic travellers. Globally, the rotation from growth to value continues with banks and miners continuing to drive gains, whilst tech is struggling to rebound.

Last week, NAB and Westpac released the results of its respective business and consumer surveys. Both continued to indicate that the domestic recovery continues to gain steam. Despite snap lockdowns in WA and VIC, business confidence and conditions comfortably rose and sits well above historical averages, whilst consumer sentiment was near a 10-year high, driven primarily by optimism on the economic outlook. 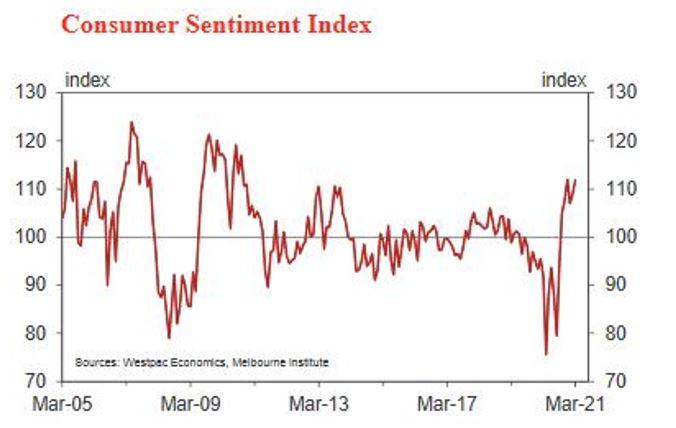 In the U.S., Biden has passed another stimulus package including state aid, another round of payments of up to $1,400 per person and extended the additional unemployment benefits. The last two rounds of payments have coincided with a subsequent rally in retail favourites such as bitcoin or unprofitable tech companies over the next couple of months as retail money pours into these segments of the market. It will be interesting to see if this holds up as the U.S. continues to reopen, or if people instead decide to start spending on goods and services once again.

Will bond yields and inflation expectations derail the recovery?

Recently, rising bond yields have driven losses in government bonds that have started to spill over to high growth stocks. Whether this continues and begins to pose a bigger issue for the broader credit and equity markets, and indeed, the broader economic recovery, will depend on how inflation expectations play out and central banks react.

Over the past couple of weeks, inflation readings have remained well-below their respective central banks’ targets. Despite rising commodity prices and some one-off cost issues, latest inflation readings in major economies like China, U.S., Europe, Australia and Japan all remain below 2%.

Meanwhile, central banks have largely stuck to their recent rhetoric, trying to jawbone yields without explicitly making any policy changes.

The Reserve Bank of Australia (RBA) reiterated that it will likely hold the cash rate at 0.1% to 2024 with wage growth and inflation remaining far off its targets. The RBA specified that wage growth needs to be sustainably above 3% to feed through to inflation and that it will ignore any transitory inflation owing to one-off factors. In addition, the RBA continued to say that it will consider extensions to its Quantitative Easing (QE) program in due course. These comments were largely in-line with what it has been saying for several months now.

Likewise, U.S. Federal Reserve Chairman Jerome Powell had a similar story in his most recent speech, with no rate hikes seen until 2024 and a continuation of QE as previously planned as employment remains far from target and any transitory inflation will be ignored. The European Central Bank was the only one to broadcast some sort of action, though a minor one, as it announced that it will conduct its QE program at a “significantly higher pace” over the next quarter whilst maintaining the total amount and duration of QE steady.

Given this backdrop, we think it is likely for central banks to move on any further spike in yields in order to rein in potential spill-over effects, but they are likely to lean on making tweaks to current QE programs, primarily via the pace and timing of purchases, rather than expanding or extending them. Therefore, we expect yields to follow historical patterns of a steep rise followed by a period of stability as per the chart below.

In the coming week, we will hear more on this issue from the U.S. Federal Reserve as they wrap up their monthly policy meeting. Aside from that, we will get another read on the economic rebound for the two largest global economies with both U.S. and China due to post industrial production and retail sales figures. Domestically, we get February’s employment figures, which will hopefully remain robust with another 30,000 jobs expected to be added. Such a figure would put us at less than 35,000 jobs lost since the pandemic based on the number of people employed.