Equities had another volatile week with the Australian market finish down 0.7%. Financials were the best performing sector rising 2.2%, led by Commonwealth Bank (CBA) which rose 5.1%. The worst performers were the Materials sector down 3.4% followed by Tech which fell 1.8%. The Australian market outperformed the US, with the S&P500 Index falling 2.9% and the tech heavy NASDAQ falling another 4%. On an interesting note, some of the leading ‘pandemic winning’ technology names including Zoom (ZM), Shopify (SHOP), and DocuSign (DOCU) have all given up their massive share price gains and are now trading at below where they were trading before the pandemic hit two years ago.

The 10-year US bond yield jumped sharply last week up 28bps to 2%. The Australian 10-year yield also rose 32bps to 2.39% with investors again concerned about inflation and the continued pressure on Central Banks to lift interest rates. Commodities remained volatile with the London Metal Exchange forced to halt trading in its nickel market with prices briefly surging to more than $US100,000 a ton. As reference, nickel was trading for $US23,000 just a month prior.

In economic news, Australian ANZ job ads rose 8.4% which shows that the job market remains strong. NAB Business confidence and conditions rebounded back above long-term averages. However, Westpac consumer sentiment plunged 4.2% driven by housing and economic expectations. RBA Governor Lowe comments were more hawkish this week stating that it is ‘prudent to plan’ for an interest rate hike later this year.

US inflation rose to a new 40 year high with headline inflation rising to 7.9% year-on-year, in-line with market expectations. Sticky price inflation rose to the highest level in three decades showing that inflation is both broad based and that the Federal Bank has a tricky task of taming this inflation without damaging the nascent economic recovery. Continuing with this theme, the European Central Bank unexpectedly announced tapering its bond purchases from May and could halt the program as soon as Q3, acknowledging that the war in Ukraine presenting substantial upside risk to inflation.

Looking to the week ahead, the major focus for investors will be to what degree the US Federal Reserve raise interest rates and their commentary about the likely path forward for further rises. The Bank of England is also expected to raise interest rates for the third time when they meet. Employment data will also be released for Australia.

The implications of rising petrol prices

As we are unfortunately all too aware, the price of petrol has increased significantly over the last few weeks. Prices of $2.20 per litre are standard at the bowser in Melbourne, and economists at the Commonwealth Bank have warned this could soon be $2.50 if the war in Ukraine continues.

The rise in oil prices has been swift and meaningful. US President Joe Biden banned Russian energy imports last week in a move to heap economic pain on Russian for its invasion of Ukraine. Even before the ban became official, many companies refused to purchase Russian oil for fear of future sanctions and the reputational risks that came with it. Shell had a public relations nightmare when it made the controversial decision to purchase Russian oil, for which they have now apologised. Russia produces 7 million barrels per day, or roughly 7% of the global supply. The reduced supply is hitting at the exact moment as oil demand continues to grow with the further opening of the global economy from the Omicron wave. Increased demand and reduced supply have led to the spike in oil prices. 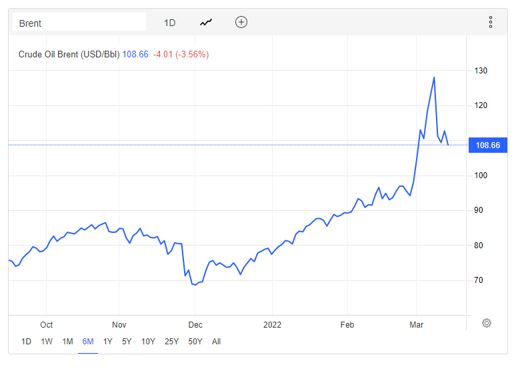 Households are feeling the squeeze from the increasing energy costs. Household budgets were already stretched by broad-based inflation in the cost of living. In the US, over the last 12 months, food prices have risen 7.9%, the most significant jump since July 1981. With grocery store prices rising at an even faster 8.6%. Rents continue to grow strongly on the back of a hot property market. And rising fuel prices will lead to higher shipping and transportation costs, making food and goods more expensive for the end consumer in the coming months.

This rising inflation has led to US Consumer sentiment falling to its lowest level in 10 years. The risk is that households will start cutting back on spending, especially discretionary spending, to pay for the essentials like food, rent, and petrol. A slowdown in economic activity raises the US’s chances of entering a recession.

However, it is not all doom and gloom. The below chart from Omair Sharif of Inflation Insights LLC demonstrates that the percentage of US households spending towards gasoline is lower than in most periods over the last 60 years. The red dotted line shows that if current prices are maintained, the percentage of a household budget going to petrol will return to the long-term trend line. Also, overall oil consumption has fallen and the US now has a domestic shale oil industry leaving it less vulnerable compared to earlier oil shocks in the 1970s. 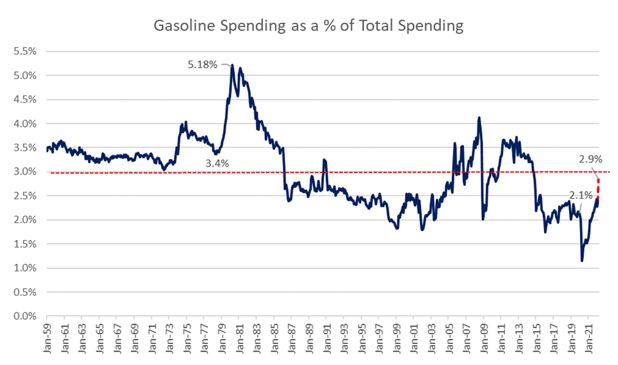 Consumers in the US and Australia have record savings built from generous stimulus measures during the pandemic, which will help to soften the blow in the short term. At some point energy prices rising too high will lead consumers to change their habits and reduce the amount of energy they consume, alleviating some of the demand pressure. Though if consumer demand is impacted for an extended period, it does raise the prospects of a recession. We think it is unlikely that the rising oil price will completely derail the consumer-led recovery; the supply of oil could return either from greater US shale output, a deal with Iran, or if Russian oil just gets redistributed to India or China. There are also hopes that a resolution to the war may be negotiated which could see sanctions removed. However, given the present uncertainty about the path forward, we will be watching this space closely.