Markets had a volatile week, starting strongly before much higher-than-expected inflation figures in the US torpedoed sentiment, sending equities lower as tech and other growth names saw another sell off. Dip buyers helped mitigate the damage, though the MSCI World still fell 1.3% and the S&P/ASX 200 was off 0.6% as the tech sector fell 6.9%.

In Australia, business sentiment and conditions as measured by the NAB survey hit all time highs, whilst retail sales were up 1.3% between February and March. A very supportive Federal Budget was released on Tuesday as well, underpinning our optimistic outlook for the Australian economy.

Pendal (PDL) also reported quarterly profit that was in-line with estimates, driven by strong growth of funds under management due to strong market returns and net inflows. The big positive though was the acquisition of US fund manager Thompson, Siegel and Walmsley for $413 million, with the acquisition expected to boost PDL’s earnings per share by double digits in its first full year. We see this as a good deal and continue to retain a positive view on the company.

A2 Milk (A2M) had in-line revenues for the third quarter, but downgraded full year revenue guidance again as its efforts to reinvigorate the daigou sales channel continues to flounder. Management has decided to destroy older, unsold stock rather than try to salvage costs through heavy discounting in order to maintain brand perception. A2M noted that liquid milk sales in Australia and the US continue to grow strongly, but its key market remains China. Disappointingly, the retail China label growth has also slowed, potentially indicating that the company is now either losing its brand appeal or competitive pressures are mounting. However, the company retains close to $1 per share in cash, with management indicating that a share buyback could be on the cards.

For this week ahead, Australian employment data is expected to be strong again, whilst global markets may be watching European inflation data closely after last week’s big US inflation surprise. We also get Chinese economic activity readings and preliminary PMIs for most major economies.

On Thursday, China’s state council released a statement promising that it would step up coordination between policies to maintain stable economic operations and cope with the fast increase in commodity prices, without any details on potential measures. This put a dent in the blistering commodity rally as iron ore fell almost 10% whilst oil and copper fell by close to 3%. Still, these are only levels that these commodities sat at last week, and all three remain higher for the month. 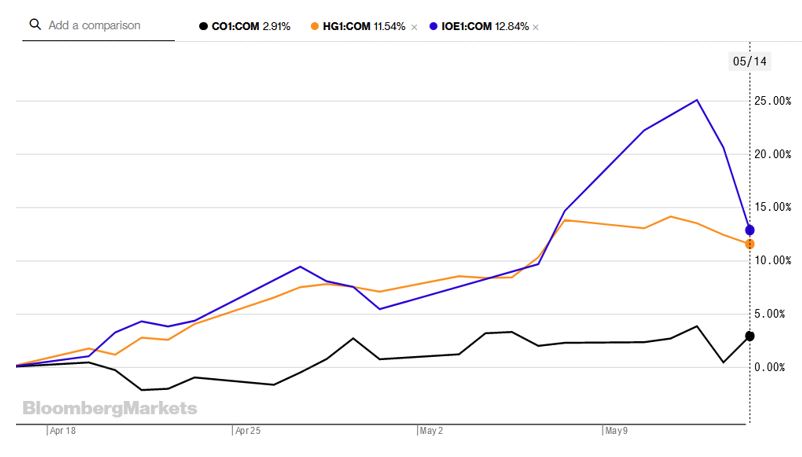 Given the tight supply for many of these commodities that are critical to construction, infrastructure and various other essential cogs to the global economic recovery, we do not expect a huge drawdown in commodity prices. We continue to remain positive on commodities, with BHP having exposure to all three key resources above. Large fiscal stimulus in the form of infrastructure spending continues to underpin the rally in iron ore and copper. At current prices, many of the ASX listed miners are generating huge profits and free cash flow. We expect commodity prices to fall in the medium term, however, we think that this will take longer to correct than what is baked into current valuations.