It was a good week for markets as yields stabilised and equities recovered further. A strong start to the U.S. quarterly earnings season as big banks posted big beats provided the impetus for the market to look past the worries around supply chains, inflation and the still unresolved Evergrande issues. Better-than-expected loan book growth from the big banks showed that companies may be more confident on the medium-term outlook and are starting to spend.

The S&P/ASX 200 was an underperformer, rising just 0.6% while the U.S. S&P 500 rose 1.8% and the MSCI World rose 2.1%. Domestic returns were driven by the materials sector as copper surged 14% for the week and iron ore prices rebounded. Growth sectors also performed well as tech rose 1.8% and healthcare rose 1.1% in the absence of pressure from rising yields.

On the local economy, Australian employment data was largely weak as expected, with 138,000 jobs lost and the participation rate continuing to fall. However, there was some underlying strength as full-time employment rose by 26,700. This, along with the strong bounce in business confidence as surveyed by NAB, indicates that there will likely be a quick rebound for Australia once restrictions ease.

On the global front, U.S. data was supportive for markets, with strong retail sales figures highlighting a resilient consumer, whilst core inflation showed some moderation as transitory components such as vehicle and transport pulling back. However, shelter costs strengthened and we continue to expect that the stickier components will keep the upward pressure on both inflation figures and yields for some time.

It is a busy time on the corporate front as we head into AGM season. Heavyweights CSL and Telstra (TLS) reaffirmed earlier guidance as did Challenger (CGF) who also notched a 3% increase in assets under management for the quarter. We maintain a positive outlook on all three.

Rio Tinto (RIO) downgraded its production outlook, and Treasury Wine Estates (TWE) warned on the impact that lockdowns are having on its domestic business. Pendal (PDL) sold off heavily as it recorded net outflows, however, we think the reaction was overdone and we do not expect a sustained period of net outflows as its funds continue to have strong medium-term performance.

Newcrest (NCM) provided studies for four major expansion projects which highlighted the strength of its resources, particularly the Red Chris mine. The figures were hugely positive, with returns of all four projects expected to be more than 16% p.a. and expected to halve NCM’s all-in-sustaining-costs, though markets understandably take such claims with a pinch of salt given the execution risks involved. We continue to see strong growth potential here but it will take over a decade to see the full benefits.

Downer (DOW) announced the sale of Open Cut Mining East for $150 million, representing the sale of the final mining services exposure. We think that management has done a good job in executing the strategy to slim down and focus on the higher returning and less capital-intensive infrastructure and facilities services.

Elsewhere, ASIC launched a lawsuit against IAG for misleading and deceptive conduct after offering discounts that were based on inflated premiums, whilst Westpac (WBC) announced a $1.3 billion writedown for the half to September 2021, some of which was flagged earlier as part of the costs related to the sale of its Life Insurance business. WBC estimates the writedown to impact its Tier 1 capital ratio by 0.15%, which we think still leaves the bank in a great position to announce a big capital return initiative when it posts its full year results.

This week, international earnings season will remain in the spotlight as markets keep an eye on any signs of stress on profit and margins from ongoing supply chain issues, labour imbalances and energy costs. China also releases key monthly economic data that is expected to remain weak.

As highlighted by the results from the big U.S. banks last week, companies are starting to borrow again and it is a good sign. Corporate capital expenditures have largely been weak over the past decade as the resource capex boom faded along with commodity prices. The onset of the pandemic may have ushered in a new phase of capital expenditure as supply chain issues, a surge in demand for physical goods and renewed concerns over supply security in sensitive areas such as semiconductors have all combined to send guidance for global capex to levels not seen since 2014. 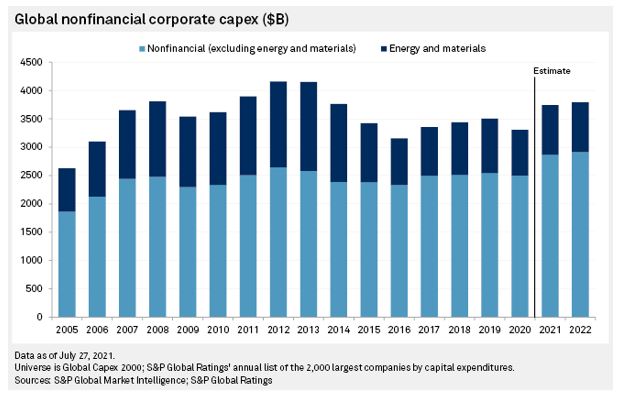 This time around, spending from the resources sector remains subdued and capex is being driven by other industries as countries like the U.S. look to bring some production back onshore after decades of offshoring production to lower costs. For example, three of the biggest semiconductor manufacturers, Intel, Samsung Electronics and Taiwan Semiconductor Manufacturing have announced plans to build new factories in the U.S. after the government pushed for more domestic production. Other industries will be looking to invest further in production too as companies like Nike have seen production disruptions lead to lengthening delivery times. These companies will be looking to expand and diversify production which should lead to elevated levels of capex over the next few years.

Australia should see a similar trend, with capex initially surging as states eased restrictions, though there was a steep drop-off as the delta variant forced another round of lockdowns. With another round of reopening occurring now, we should expect capex to recover quickly and is likely to remain elevated for some time. 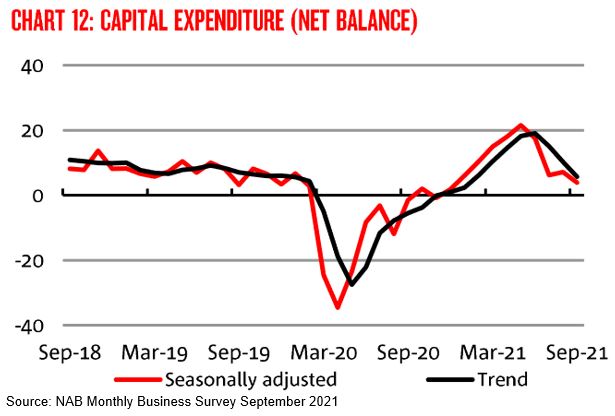 Overall, elevated capex is positive for global economic growth and usually for equities as well. With capex likely to be elevated in the medium term, companies exposed to this spending are poised to benefit. While there are few options in the domestic market to gain exposure to this theme, global markets offer a much broader investment universe. Companies such as Caterpillar and Honeywell in the U.S., and ASML and Siemens in Europe are likely to benefit from elevated capex.