The S&P/ASX 200 ended the week flat as the strength in miners, driven by big earnings and a big dividend from Rio Tinto (RIO), was offset by weakness in most other sectors, with utilities dragged lower by Origin (ORG)’s announcement of a large impairment and downgrade to its earnings guidance for the Energy Markets (electricity) business.

Global equities were largely lower as the S&P 500 fell 0.4% despite another week of strong earnings, with big tech names such as Alphabet, Microsoft and Apple beating consensus estimates. Emerging Markets were dragged lower as investors Chinese political risk continued to weigh on the country’s equities, bonds and currency after China announced that companies were no longer able to make profits from the provision of tuition covering the national schooling syllabus. This follows months of punishments for Chinese tech companies.

On the economic front, it was the usual quiet end to the month with most of the notable data coming out of the U.S. American consumer confidence remained strong but preliminary GDP readings disappointed, primarily due to a large drawdown in inventory levels which points to ongoing supply chain issues. Investors were watching the Federal Reserve’s policy meeting announcement closely for any signs of tapering and the Fed continued with its dovish rhetoric whilst acknowledging the improving U.S. economy.

We had several updates of interest on the corporate front last week. In addition to strong RIO earnings, Fortescue (FMG) and OZ Minerals (OZL) provided strong production reports. FMG noted rising costs and provided guidance that saw mixed reception by investors as production strength will likely be offset by a higher-than-expected rise in costs. On the other hand, OZL guided to lower copper production costs on better production for gold, a common by-product for copper miners.

IOOF (IFL) provided an update on funds under management and advice (FUMA) that saw solid growth thanks to market returns. In all, it was a fairly positive report as integration of the ANZ P&I acquisition continues to progress as expected whilst adviser exits and outflows from the advice business have been reasonable. It is still early days for the MLC acquisition that closed on 1 June 2021, and we will be closely watching the integration progress on both MLC and ANZ P&I over the next few months. Significant outflows remain a key risk for investors.

Elsewhere, NAB announced a $2.5 billion on-market buyback as it seeks to trim its excess capital position. This follows ANZ’s buyback announcement last week, with Commonwealth Bank and Westpac expected to follow suit. Macquarie (MQG) was also in the news with an upbeat quarter thanks to strong commodity trading, though expected this to reverse as conditions normalise.

This week, earnings season continues in the U.S. as another 25% of the S&P 500 is expected to report, whilst the local earnings season is just starting to gather steam, with REA Group (REA) and Resmed (RMD) reporting on Friday. On the economic front, we will be watching retail sales and ANZ job ads for some indication of the extent of the damage caused by Sydney’s prolonged lockdown. The Reserve Bank of Australia (RBA) also has a policy meeting and a reversal of last month’s tapering cannot be ruled out. Purchasing Manager Indices (PMIs), a closely watched activity survey, is expected to indicate further slowdowns as we move from peak recovery to normalisation in countries like the U.S., whilst the delta variant is driving slowdowns in other countries. Finally, the U.S. employment figures will also be released at the end of the week.

Australian inflation not a concern

Last week, Australian CPI came in at 3.8% year-on-year for the June quarter. Whilst this was above the RBA’s 2-3% target band, it is unlikely to impact the RBA’s thinking. First of all, base effects are driving the figure higher, with the quarter-on-quarter reading at 0.8%, or 3.2% on an annualised basis.

More importantly, the RBA tends to look at the Trimmed Mean CPI rather than the headline figure. The Trimmed Mean CPI is a measure of underlying inflation that strips out large, one-off impacts such as those seen over the past 12 months. As a result, the chart below shows that annualised Trimmed Mean CPI remains well below the target band range of 2-3%, with the latest reading at 1.6%. 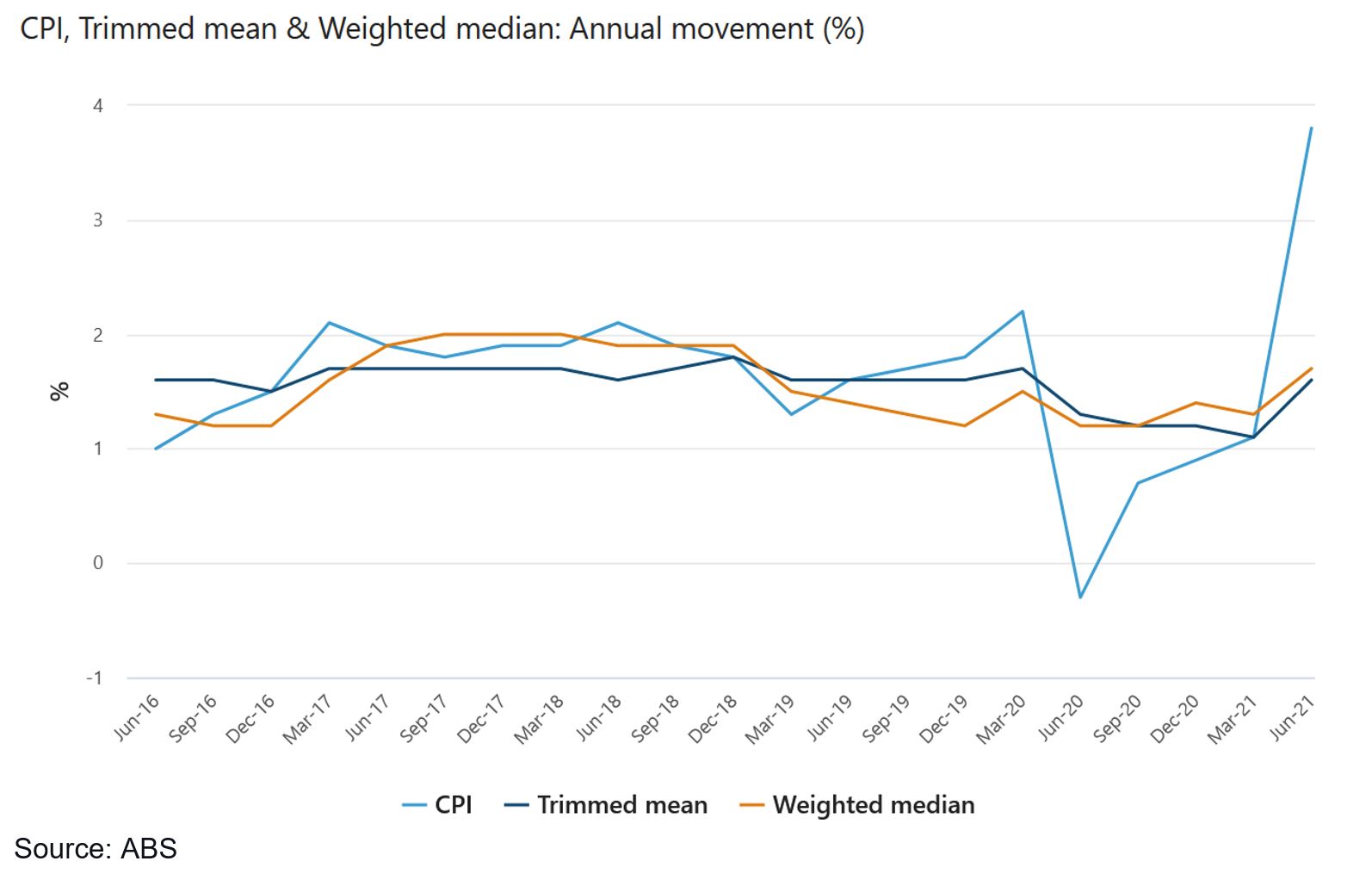 As a result, unlike the Fed, the RBA should not be concerned or pressured to reduce monetary policy support in Australia despite the better recovery in both economic output and employment figures relative to the U.S. to date. Coupled with recent lockdowns and low vaccination rates, we expect that Australian government bonds are likely to outperform the broader global index which is dominated by U.S. issuance.