2021 was another eventful year as we continue to deal with significant uncertainties. The weekly update will be taking a break until 10 January 2022. We expect another year full of twists, as per usual, there is never a dull moment for markets.

The past week was another risk-off one. The MSCI World fell 1.4%, dragged lower by the U.S. S&P 500’s 1.9% fall. Equities and bonds look to be in a bit of a disconnect as growth stocks drove the sell-off despite longer-term bond yields falling. Concerns around the impact of the omicron variant remain but the central bank pivot seems to be a bigger driver for equities.

The S&P/ASX 200 outperformed but still posted a -0.7% return, dragged lower by CSL’s capital raising as it looks to acquire Vifor Pharma. Healthcare was the worst performing sector at -6.5%, with the Tech sector not far behind at -4.5%. Buffeted by more hawkish central banks and a potential regulatory review for Buy Now Pay Later, APT was a major underperformer, ending the week below $83. The best performer was the Materials sector as a rebound in iron ore helped the major miners higher.

In the bond market, 10-year yields for Australia and the U.S. fell 0.06% and 0.08% to 1.59% and 1.4% respectively. This was despite most central bank policy meetings ending with hawkish moves. The U.S. Federal Reserve will double the speed of its tapering, meaning that its bond buying program will now be expected to end in March instead of June, and its committee members now see three rate hikes on average for 2022 instead of the September projections for a solitary hike. Elsewhere, the Bank of England unexpectedly hiked interest rates while the European Central Bank looks to end its pandemic emergency purchase program, though this is being offset by a temporary increase in its ongoing asset purchase program.

The Reserve Bank of Australia (RBA) broke from the pack, reiterating its stance as it noted that inflation has only just returned to the target range and wage growth remains low. Governor Lowe also provided guidance that the RBA will discuss tapering its bond purchase program in February and ending it in May.

Markets were also busy digesting a raft of economic data last week before we enter a quiet period over the next few weeks. Chinese industrial production and retail sales figures continue to indicate overall weakness as markets look for the government to pivot back towards easing. Preliminary readings for Purchasing Manager Indices (PMIs) on both manufacturing and services across U.S., Europe and Australia continued to show solid but weakening growth. The NAB Business Survey and Westpac Consumer Sentiment echoed the domestic PMI readings, with both remaining above long-term averages but falling from the previous month.

Employment data was a bright spot for domestic data. The unemployment rate fell to 4.6% with 366,100 jobs added, far above expectations. The report was solid across the board, with 128,300 full time jobs added, and the participation rate rising to 66.1%, back around pre-COVID levels.

On the corporate front, CSL grabbed the headlines with a huge $6.3b institutional placement to help fund its $17.2b acquisition of Vifor Pharma. Given management’s great track record of execution, just look at Seqirus, we view the transaction positively. Furthermore, the deal is earnings and free cash flow accretive. However, the acquisition is still subject to shareholder and regulatory approvals.

It was a busy week for healthcare M&A, with Ramsay Healthcare (RHC) announcing its acquisition of Elysium Health, a mental healthcare provider in the UK, and Sonic Healthcare (SHL) acquiring U.S. based pathology business, ProPath. RHC’s acquisition was for $1.4b, funded by existing cash and debt facilities, while SHL’s acquisition price was not disclosed. Both continue to execute on roll-up strategies and have a strong history on delivering value from acquisitions. Overall, we continue to like the healthcare space and believe that the sector offers better valuations for growth companies relative to the technology sector.

Elsewhere, Charter Hall (CHC) upgraded expectations yet again as rising valuations lifted its funds under management and will provide a boost to performance fees. Transurban (TCL) also announced a settlement for the West Gate Tunnel project, costing an additional $2b to complete and a completion date expected to be the last quarter of 2025, over 15 months later than originally forecast.

Australia was one of the best performers in terms of economic recovery but we took a hit in the third quarter of 2021 as renewed lockdowns due to the delta variant caused a sharp contraction. The chart below shows economic growth as measured by GDP, alongside employment data. 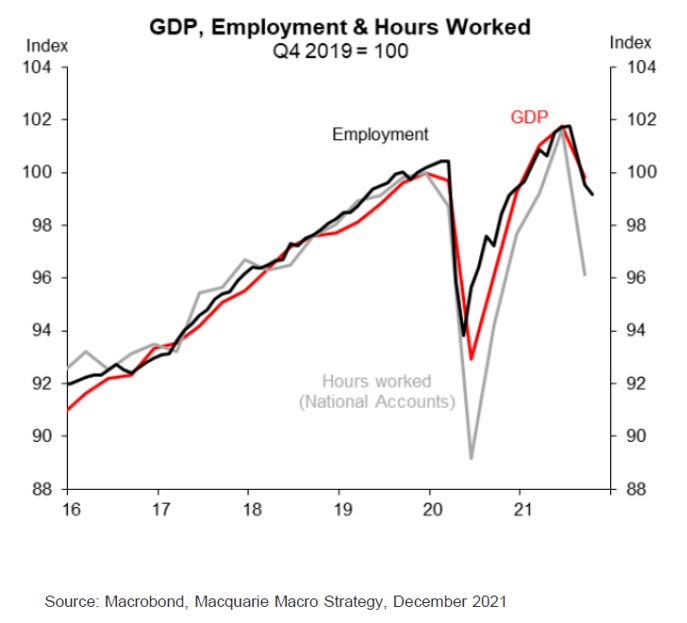 Despite the difficulties over the past few months, there are reasons to be optimistic that we will have another V-shaped recovery in the current quarter. The above chart shows how closely employment is linked to GDP. Unlike the quarterly GDP readings, employment data is reported monthly and paints an optimistic picture.

As mentioned above, the employment data for November was released last week and was strong across the board. Looking at the same employment and hours worked metrics as the black and grey lines in the chart above, both have rebounded sharply. 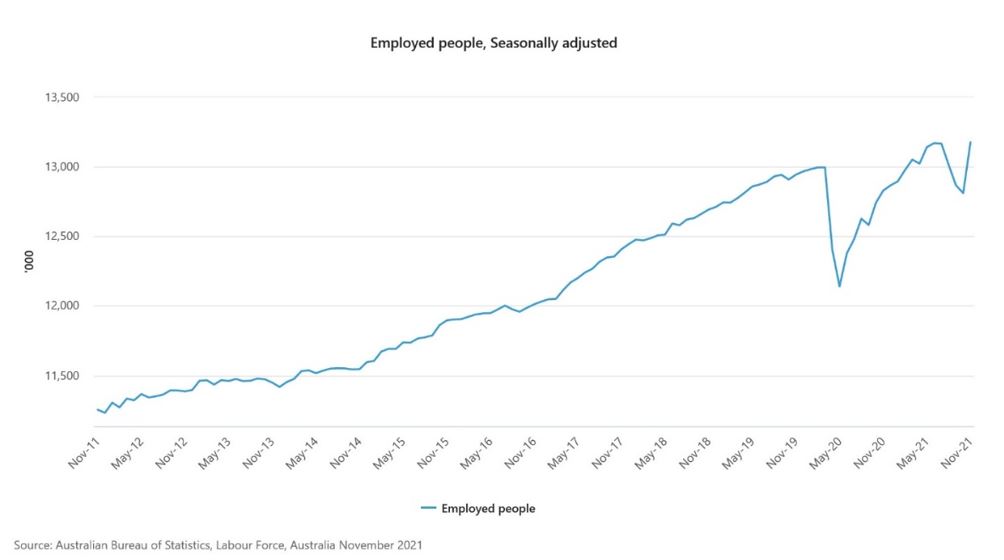 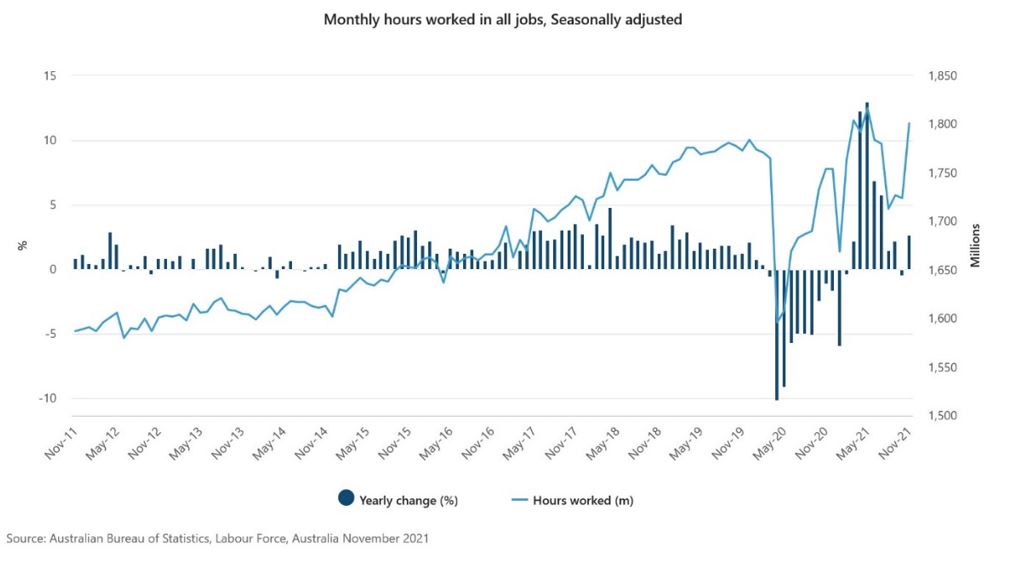 Once again, the Australian economy is showing its resilience and ability to adapt. While it would be great to end on a cheery note ahead of the holiday period, we cannot turn a blind eye to the risks of omicron and other variants, nor the risk of the impact from a continued slowing of China’s economy or more significant trade barriers. As such, we remain hopeful for an uneventful and positive period over the next few weeks but will remain vigilant for any potential risks or opportunities in the market.

Happy holidays and thanks for taking the time to read this newsletter. We hope you will be back for more in 2022.