Global equities were largely lower as the MSCI World fell 1.3%, driven by a 2% fall in the S&P 500 last week. All eyes were on the U.S. Federal Reserve (Fed) who surprised markets with updated interest rate projections that showed most members now expect more than one rate hike in 2023, with inflation projections for 2021 lifted by 1% to 3.4%. Fed Chair Jerome Powell also talked about thinking about tapering quantitative easing (QE). Conversely, all this talk actually led to U.S. 10-year bond yields falling for the week, though short to medium term bond yields rose.

In contrast, the Reserve Bank of Australia maintained its position for low rates and QE to remain as “wages growth would need to be materially higher than it is currently. This would require significant gains in employment and a sustained return to a tight labour market. The Board viewed these conditions as unlikely until 2024 at the earliest.”

The S&P/ASX 200 outperformed global markets in the shortened week, rising 0.8% despite a large sell-off in miners as China announced that it will be releasing some of its aluminium, copper and zinc reserves in order to combat high commodity prices. As a result, the materials sector was the worst performer, falling over 4% last week, with energy also losing ground and falling 2.2%. This was offset by a strong rebound in technology, up by over 6%, and a 4% rise in both consumer discretionary and healthcare sectors.

The Australian economic recovery continues to strengthen, with employment data once again coming in well above expectations. With 115,200 jobs added, nearly four times what was expected, the unemployment rate fell to 5.1% and sits at the same level as February 2020, just before the effects of the pandemic were felt. We remain positive on the strength of the domestic economy and continue to favour exposures to the domestic consumer.

In corporate news, Challenger (CGF) and Coles (COL) held investor updates, with the former reaffirming its guidance for 2021 and providing strong 2022 guidance. CGF fell however, as it announced that it would hold more capital moving forward which has a negative impact on profit margins. We remain positive on CGF as it continues to grow sales strongly and is a beneficiary of the retirement income framework now due 1 July 2022 after being pushed back several years.

COL also fell post its investor update as it flagged higher investment into key growth areas. It is a change of approach after previously guiding for investment to remain around $1 billion a year but the increase to $1.4 billion makes sense after benefitting from a surge in cash flow over the past year thanks to the pandemic.

Sonic Healthcare (SHL) was also in the spotlight as it returned to the M&A scene with yet another bolt-on acquisition. The acquisition of Canberra Imaging Group is expected to be earnings accretive immediately and will be funded by cash and available debt lines. Whilst not particularly material for SHL given the size of the acquisition, investors cheered the move as it marks a resumption of the strategy that has worked so well in the long-term for the company. SHL has been a big beneficiary of the pandemic as COVID testing significantly boosted cash flows but has been sitting on the sidelines with regards to using that cash for M&A, citing the uncertain environment. We continue to like SHL as a quality company with great management but concede that the recent rally now means that it is looking fairly valued and the position could be used as a funding source for more attractive opportunities.

For the week ahead, key economic figures come in the form of preliminary Purchasing Manager Indices (PMIs) across the major economies, and inflation watch continues with the U.S. core Personal Consumption Expenditure (PCE) readings are released. The U.S. also releases finalised GDP figures for the first quarter of 2021, as well as personal spending data. On the domestic front, it is a largely quiet week.

Australia continues to recover to pre-pandemic levels, with GDP, number of employed people, and now the unemployment rate in what truly looks like a V shaped recovery in the chart below. 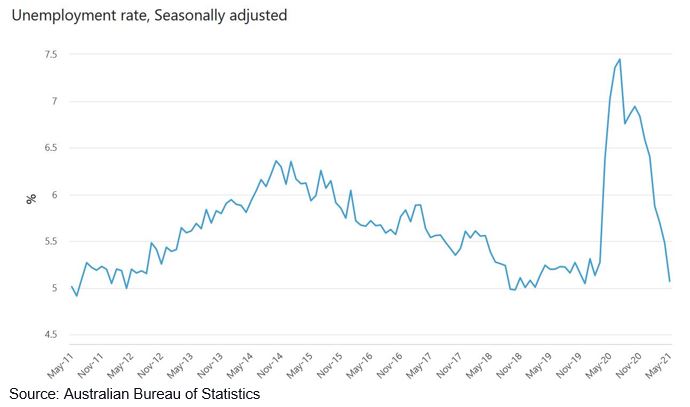 The RBA has remained dovish despite one of the strongest economic recoveries globally, with the central bank remaining unhappy with employment data despite the many areas of strength in the labour market. The RBA is not just looking for a recovery to pre-pandemic levels given the lack of wage growth and inflation in the decade prior to the pandemic. Instead, it is taking this opportunity to maintain easy monetary policies to fuel a post-pandemic recovery to bring the unemployment rate down further in the hopes of finally pressuring wages higher. As a result, whilst most of the major economies have given up hope of a V-shaped recovery and are hoping for a U-shaped recovery at best (whilst Europe is struggling with a W-shaped recovery), Australia is already looking past the pandemic, despite lingering risks as shown by the recent Victoria lockdown and now NSW outbreak, and hoping for a J-shaped recovery.

Given the signals for continued supportive policy measures from both the government and RBA, we remain positive on the domestic economy and maintain a favourable view on domestic equities, with an overweight to cyclicals.