Markets remained mixed with equities largely weak while bond yields edged higher. The S&P/ASX 200 was flat as the materials sector continues to be a drag as the iron ore price goes into free fall. Conversely, energy was the best performer as oil, gas and coal prices continue higher, supported by continued drawdowns in inventory readings.

Global equities were lower with the MSCI World shedding 0.5%, in-line with the U.S. S&P 500 performance. Investors in Chinese equities have had a terrible time due to regulatory issues and are now having to contend with risks to the financial system as one of the country’s largest property developers, Evergrande, sits on the brink of default that could spark contagion. In all, other markets seem to be shrugging off the issue, but it is one that could have a widespread impact on global markets if the Chinese government is unable to contain it.

Bond yields rose despite U.S. inflation readings that came in below consensus expectations as reopening components start to fall. The move up was likely supported by surprisingly strong U.S. retail sales growth compared to expectations for a fall due to a recent surge in COVID cases. The U.S. 10-year treasury yield rose to 1.37% while the Australian 10-year yield rose to 1.31%.

In Australia, the NAB business survey indicated a slight rebound in confidence from the previous month as some states ease restrictions. However, the reading remains in negative territory and the weakness is supported by employment data. The Australian Bureau of Statistics estimated 146,300 jobs were lost in August, though the unemployment rate fell to 4.5%. More on this below.

On the corporate front, Sydney Airport (SYD) finally opened its books to the consortium led by IFM Investors after a revised offer of $8.75. The board has done well to solicit two offer increases despite the lack of a competing bidder. On the M&A front, Wesfarmers (WES) also upped its bid for Australian Pharmaceutical Industries (API) by 12.3% to $1.55 per share. Meanwhile, the decommissioning liabilities that Woodside Petroleum (WPL) is expected to take on as part of the BHP petroleum merger is likely to be USD3.9 billion, well below consensus expectations. This led to WPL outperforming for the week. We continue to view the merger as favourable for WPL in the long-term.

Telstra (TLS) and Brambles (BXB) held strategy updates. BXB saw a big sell-off as the company flagged another large round of investment on a digital transformation, just as the previous round of investment ends. As a result, the company downgraded profit guidance and the stock sold off. On the other hand, TLS had a positive reception as it outlined the next phase for the company, dubbed T25. TLS remains on track to achieve the bulk of its goals set out in the T22 strategy, though some objectives have been understandably delayed to 2023 due to the pandemic. The T25 strategy includes a further $500 million in cost savings and perhaps most importantly, a return to growth in earnings and cash flow as its mobile division recovers. We remain positive on TLS but were mildly disappointed in the lack of update on the partial equity sale of InfraCo Fixed to unlock further value, though management noted that the sale process is progressing.

This week, the U.S. Federal Reserve has a policy meeting and markets will be watching for any comments on a timeline for tapering.

In another weird twist brought on by the pandemic, the unemployment rate fell to 4.5% despite a large number of jobs lost in August. The headline unemployment rate is misleading given that it is based off the participation rate and many people just gave up looking for jobs due to lockdowns, resulting in the participation rate falling a further 0.8% to 65.2%, after the 0.2% fall in July.

Instead, we can look for a clearer picture on the impact of lockdowns with the hours worked and the underemployment rate. The number of hours worked has now been falling since peaking in June, with a sharp fall in August as it became clear that New South Wales and Victoria were facing lengthy restrictions. This was also evident from business confidence figures last month which fell steeply into negative territory. The underemployment rate, which includes those who are employed but not getting enough hours, has been rising since June. 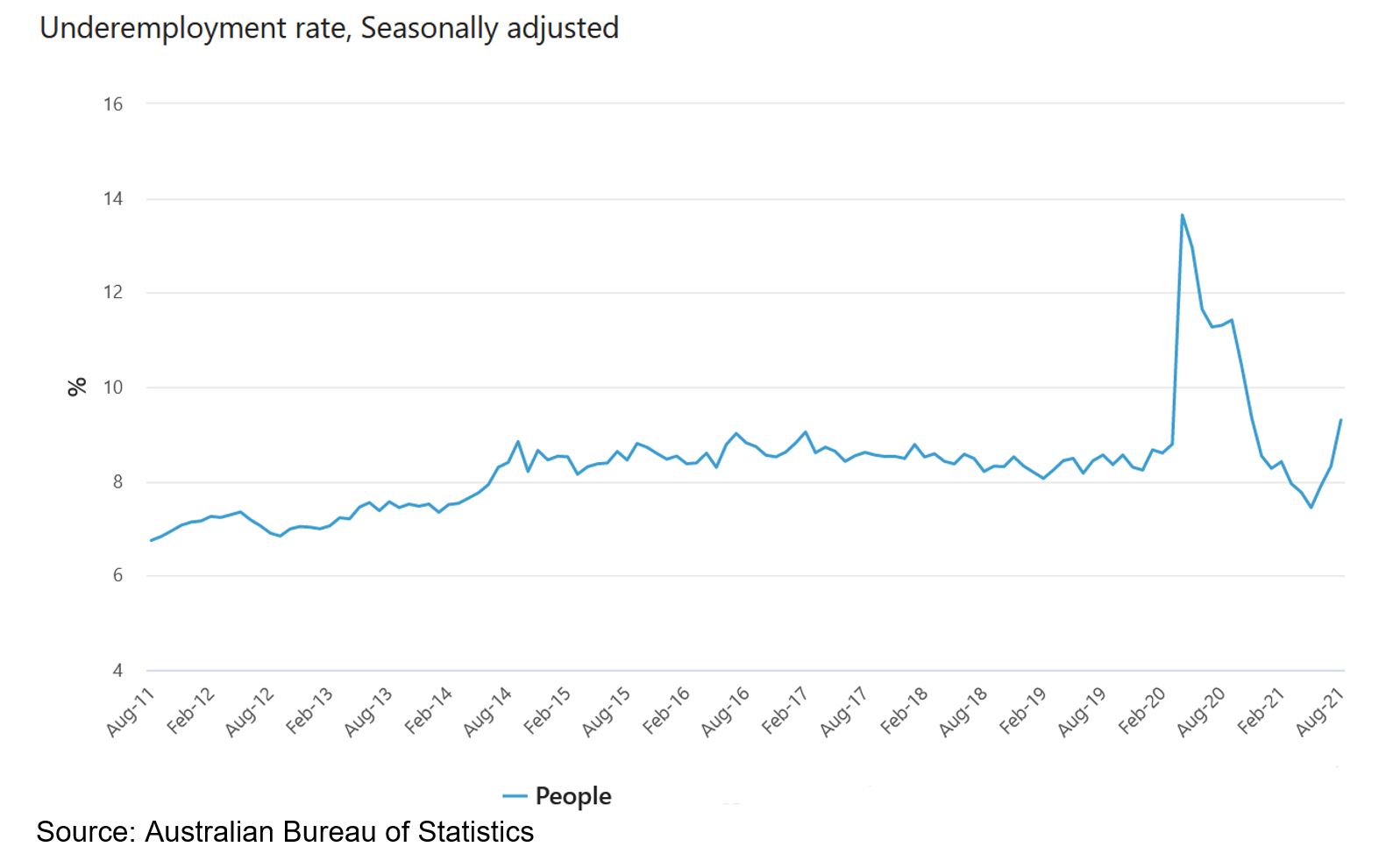 The market has largely brushed off the issue as yields have risen and equities remain buoyant despite some moderation in recent weeks. Vaccination rates have accelerated and hopes that a high proportion of fully vaccinated will mean an end to rolling lockdowns have helped markets look past the valley to the other side. We do see some reason for a more cautious stance than a few months ago as earnings expectations are now being revised lower. However, given the ongoing recovery and supportive policy backdrop, we remain neutral on risk assets and have retained a fully invested position while rotating towards higher quality names within our portfolios.