Markets remain in consolidation mode with equities largely flat and bond yields stabilising. The MSCI World rose 0.1% as the U.S. S&P 500 rose 0.4%, driven by a rally in technology and growth companies. The S&P/ASX 200 was down 0.5% for the week owing to the larger proportion of cyclical exposures in the domestic index.

The underperformance of the S&P/ASX 200 was driven by Financials (-3.2%), with Materials (-1.6%) and Energy (-1.5%) also posting negative returns. Tech (+3.1%) and Healthcare (+2.9%) were the gainers. The drawdown in Financials was largely driven by Commonwealth Bank’s (CBA) first quarter result which disappointed markets with a lower-than-expected cash profit as above system volume growth was more than offset by rising costs and lower margins.

Global bond yields were flat despite improving economic data from China and strong U.S. retail sales. Australia’s 10-year bond yield was largely flat around 1.8%, while U.S. yields moved lower to 1.54% as Austria went back into full lockdown on Friday and Germany warned that it may have to follow suit.

Aside from CBA’s update, most companies provided trading updates that were well received. Seek (SEK), Altium (ALU), NextDC (NXT) and Sonic Healthcare (SHL) all had a strong start to the financial year. To us, SHL’s result was the pick of the lot, with the company still significantly benefitting from elevated COVID testing levels that continued to grow. The market (and ourselves) is expecting testing volumes to fall but if it remains strong over the next few months, SHL looks undervalued to us. Mineral Resources (MIN) was an outlier as it downgraded production guidance on to optimise operations on the back of the recent weak iron ore price, whilst Wisetech (WTC) disappointed lofty expectations by maintaining guidance.

Elsewhere, Aristocrat Leisure (ALL) and Nufarm (NUF) reported full fiscal year results. The former had already pre-reported, but the market sold the stock down marginally as management flagged a period of slightly elevated investment spend. NUF, on the other hand, beat consensus expectations but sold off on the day as management highlighted margin pressure from rising raw material and logistics costs. This was evident in their result too, with revenues strong in their second half but earnings lower. Overall, the result was still encouraging with strong recovery seen in all its major markets after several difficult years.

On the mergers and acquisitions front, Blackstone returned with a bid for Crown (CWN) yet again, this time at a price of $12.50 per share. Woodside Petroleum (WPL) also announced an agreement to sell a 49% stake in its second Pluto train to Global Infrastructure Partners. The deal reduces the capital burden for WPL, and the risk of an equity raise. It is also indicative that WPL is likely to go ahead with developing Scarborough. There are still several catalysts ahead for WPL within the next few months including the Scarborough go-ahead, BHP Petroleum merger and the potential partial sell-downs of some of its development projects.

Looking ahead, the U.S. fiscal spending remains on watch as the U.S. House passed a watered-down USD1.7 trillion social infrastructure bill which will now have to be passed at the Senate level. This comes hot on the heels of President Biden signing the USD1.1 trillion physical infrastructure bill last week. Preliminary results for the Purchasing Manager Indices (PMIs) of most major economies will be released this week, with markets continuing to watch the delivery time and cost components for any easing of the supply chain issues that have plagued the global economy and pushed inflation higher.

Headlines have been focused on inflation and the potential for central banks to be forced to tighten monetary policy earlier and faster than their own forecasts. However, markets have rebounded and stabilised more recently as economic data is starting to turn positive once again.

As stagflation worries emerged in September, we held firm in our asset allocation positioning as we expected economic growth to rebound as the delta wave receded. This remains our view and recent economic data seems to support this. 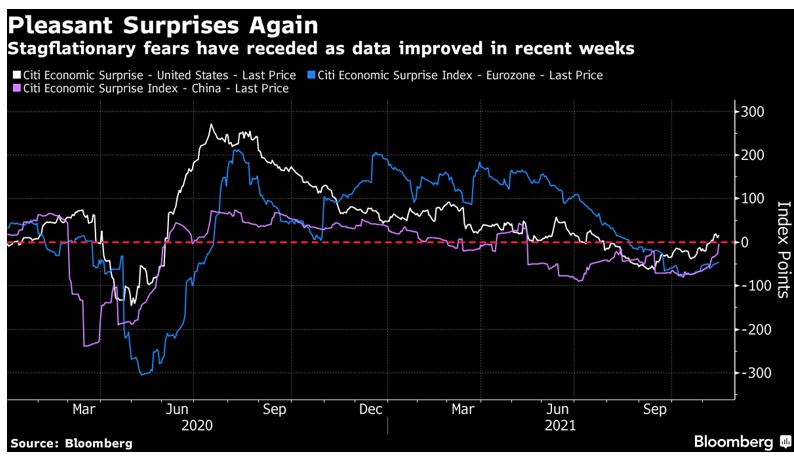 The chart above shows that U.S. economic data is now marginally beating consensus expectations, whilst economic surprises for China looks to be recovering. The risk to this view continues to stem primarily from further lockdowns or supply chain capping a rebound.

Austria going into full lockdown last week was a timely reminder that the pandemic remains a key risk. Though there is little appetite to return to lockdowns, low vaccination rates or diminishing immunity for early vaccinators still pose a risk and will need to be closely watched. The rollout of vaccine boosters and other treatments such as the antiviral pills from Pfizer and Merck, if proven to be effective, should alleviate concerns here. Timing will be crucial as COVID-19 cases in the northern hemisphere are rising quickly and some countries may have no choice but to increase restrictions if medical capacity becomes strained.

Overall, we retain the view that economies (and markets) will be able to work through these issues in the near-term and that there will be a second, albeit smaller, round of positive surprises for the economy in the months ahead.