Commodities headed lower as China continues to attempt to rein in the recent surge in prices, announcing that it will ramp up domestic iron ore exploration and production, while looking to broaden the source of iron ore imports. Iron ore, copper and oil all fell, in the mid to high single digits from their highs earlier in the week. However, this dip barely sets them back a couple of weeks, with current prices still above where they were at the start of May.

Cryptocurrency bulls were also handed a slap from China as policymakers vowed to crack down on mining and trading, sending Bitcoin, Ethereum and other cryptocurrency prices yo-yoing around.

On to the domestic economy, recent data was somewhat disappointing, albeit after a stellar run of data over the past few months. Consumer sentiment fell 4.8% after an 11% rise over the past three months. The reading remains the second highest figure since April 2010. Unemployment figures also disappointed, with the headline number of jobs falling by 30,600, though the unemployment rate fell to 5.5% as the participation rate fell. The Australian Bureau of Statistics also noted that there was no clear aggregate impact from the end of JobKeeper, with the underlying gain of 33,800 full time jobs and recent strength in job ads indicating that this miss was likely just a bump in the road.

In corporate news, Aristocrat Leisure (ALL) bumped up guidance for the year as it pre-announced an earnings beat for its first half. James Hardie (JHX) also posted strong figures with management noting strong growth momentum across all regions. Likewise, Nufarm (NUF) posted a strong trading update, well above consensus figures, though it was sold off as management commented that some customers may be pulling forward orders and did not upgrade full year expectations despite such a strong update. Positively, management noted that business momentum has continued so far, with all businesses delivering good growth and its performance improvement program is working with costs lower.

Appen (APX) also provided a trading update that was largely in-line with earlier guidance and reiterated its full year guidance for both revenue and underlying earnings. The company is also restructuring to align its teams with market opportunities and customer needs, expecting that restructuring costs will primarily relate to redundancies but should result in cost savings before reinvestment of U.S. $15 million from 2022. There was a bit of a relief rally on the back of guidance being held, but investors will need to see progress on revenue growth to follow the strong customer and project growth that it has been touting.

It is a relatively quiet week ahead, with U.S. consumer confidence and personal spending likely to be the major talking point alongside U.S. core personal consumption expenditures, a reading that is favoured by the U.S. Federal Reserve as a leading indicator for inflation.

The narrative for the last few months has been an economic recovery well above expectations and a rally in both cyclicals and inflation expectations. There are signs that this is now starting to peak. Positive economic surprises, as measured by Citigroup, have been trending lower over the past few months and has just recently turned negative. 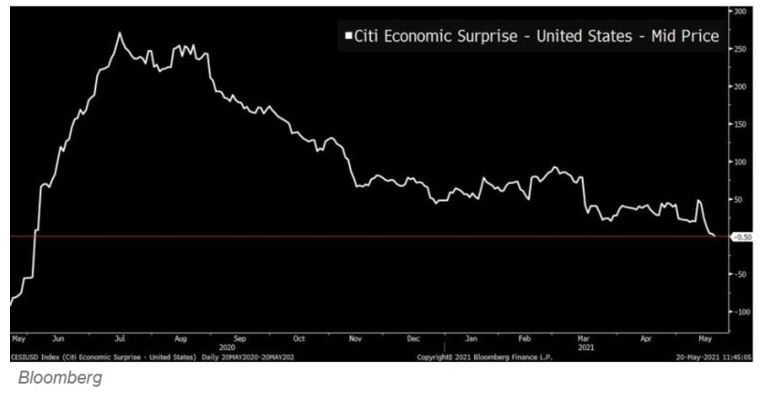 This means that economic data is no longer better than expected. Whilst the chart above is for U.S. data, this would be similar for China and Australia. The U.S. and Chinese economies drive global markets, whilst Australian data is obviously important for the domestic market.

The bond market, which has long seen as being able to price the future much better than equities, looks to be in agreement with this data. Yields peaked in March and have largely traded sideways since.

Against this backdrop, we expect that there will be more volatility as we come off peak growth and move towards the slowdown phase, there is a higher risk of a correction for equities in the near term. However, equities should still move higher in the medium term as earnings growth starts to pull valuation multiples lower. Cyclicals should still see more upgrades to expectations and are still likely to outperform the broader market, but there will likely be a shift in leadership to higher quality companies moving forward.