It was another risk-off week as equities fell further, again led by high growth, high valuation stocks that did so well in 2020. The U.S. S&P 500 led markets lower, falling 5.7% and underperforming the MSCI World’s 4.1% fall. The S&P/ASX 200 fared better with a 2.9% fall, led again by the Tech sector falling 4.4%, with Healthcare close behind at -4.3%. Energy was the best performing sector as oil prices held their ground, but the sector still fell 0.2%.

Fixed income markets fared a little better than in recent weeks as the U.S. 10-year yield ended the week slightly lower at 1.75% after briefly breaching the 1.8% mark. However, domestic bonds underperformed as the Australian 10-year bond yield rose 0.07% to 1.9% on the back of strong employment data for December. Unemployment fell to 4.2% as 64,800 jobs were added, above expectations for 43,300.

China propped up the performance of Emerging Markets last week as it released stronger than expected key economic data and cut interest rates. GDP, fixed asset investment and industrial production were all better than consensus expectations, though the consumer remains weak as retail sales grew less than expected. After spending most of 2021 prioritising regulatory reforms and reining in debt, the People’s Bank of China (PBoC) has spent the last few months easing monetary conditions. Last week, the PBoC cut several key interest rates by 0.1%.

In corporate news, resources companies including Woodside (WPL), Santos (STO), BHP and Rio Tinto (RIO) have been providing production updates. RIO had a soft second-half for 2021 and guidance for 2022 production was also on the light side. There was also a setback for RIO’s lithium ambitions as Serbia cancelled its licenses for the Jadar lithium project on environmental concerns.

BHP also had a soft six months but held guidance, for the most part, over the first-half of 2022. BHP also confirmed its unification on Thursday, meaning that it will be listed solely on the ASX from January 31 and will result in a much bigger weighting for the big Australian in the domestic index. Overall, we continue to prefer BHP over RIO on better operational performance.

WPL and STO both reported strong production results and realised pricing, resulting in both posting strong revenue. STO will provide production guidance when it reports in February. WPL provided production guidance above consensus and reversed several asset write-downs, but expects higher capital expenditure for development projects. We think both oil majors remain attractively priced with natural gas remaining a key transition energy source. Post the merger with OilSearch, STO will likely spend the next year bedding down key assets and selling ones that are deemed non-core. Meanwhile, WPL’s merger with BHP Petroleum will likely go through, keeping both sets of management busy for 2022.

Looking to the week ahead, Australian inflation figures are expected to remain muted at 3.2% for 2021 while preliminary Purchasing Manager Indices survey results and NAB business confidence figures may provide some insight to the impact of omicron. In the U.S., the market will be closely watching comments from the Federal Reserve’s policy meeting this week, while consumer confidence and personal spending data will help gauge the impact of inflation on the consumer. The U.S. earnings season also starts to pick up, with heavyweights Microsoft, Apple, Visa and Caterpillar all set to provide insights to various industries. The market has largely sold-off despite a strong start to earnings season so far, so we will also be keeping an eye on how the market reacts and not just the reports themselves.

This reminded me of a song that West Ham (soccer team) fans would know well, one about “forever blowing bubbles” that “fly so high, nearly reach the sky” then “fade and die”. It can be considered an analogy for both investor behaviour in generating and then deflating bubbles, but it can also be used for headlines about bubbles themselves. There is always someone calling a bubble and media coverage tends to flit in and out of the news until markets start getting jittery. Suddenly, there is a flood of headlines before they fade away.

Jeremy Grantham deserves respect owing to both longevity and his performance over many years, but we caution investors not to blindly follow headlines as they are often misleading and contain hyperbolic arguments. Curiously, a quick google search back to early 2020 notes that similar headlines were made in early June 2020, again from a note by Jeremy Grantham. Had an investor sell out of the S&P 500 in early June 2020, they would be missing out on about a 45% gain to the end of last week. It is time in the market, not timing the market that is crucial to investor returns.

Timing the market is extremely difficult, if not impossible, to do on a consistent basis. Therefore, investors should not panic as bearish headlines come through. While we agree that tactical shifts in asset allocation can help drive better risk-adjusted returns, discipline and patience are required to not lose sight of the long-term investment strategy. Hence, despite calling a U.S. equity bubble, Jeremy Grantham’s GMO Global Asset Allocation fund had two-thirds invested in equities, with a net exposure of almost 24% in U.S. equities as at the end of 2021.

Bubbles often occur in pockets, not at the broader index level. We largely agree of the presence of a bubble in a segment of the U.S. market, one that has already been deflating since February 2021. It has largely been contained to U.S. non-profitable tech companies that are down more than 50% from their peak, but can be more broadly categorised with high sales growth, high valuation multiples and little to no profits. 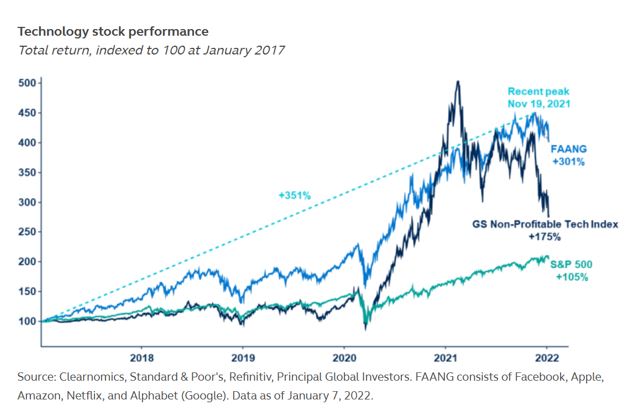 So far, as the chart above shows, contagion has not yet spread to the broader U.S. equity market, including the biggest technology names that are highly profitable. While valuations are stretched at the index level relative to history, there are always opportunities in under-appreciated areas of the market. This may be within the U.S. equity market itself, or in other markets like European equities or Emerging Markets. In our global equity portfolio, like GMO, we are also underweight U.S. equities for opportunities in other parts of the world as we see relatively more attractive valuations elsewhere.