Equities started the week painfully on worries of the impact of the delta variant and rising new cases globally but as we have often seen over the past year, any worries quickly faded and were followed by a swift rebound as the buy-the-dip mentality continued. The S&P/ASX 200 rose 0.6% for the week, driven by defensive sectors such as healthcare and staples. The U.S. S&P 500 led global markets higher with a 2% gain as the MSCI World gained 1.7%. Emerging markets were again the poor performer as China continued with a further barrage of regulations on tech related companies.

Bonds continued their recent rally with the Australian 10-year government bond now down to 1.2% and the U.S. 10-year just under 1.3%. The falls come despite further evidence of mounting inflationary pressures as many U.S. companies are commenting on rising labour and raw material cost pressures, indicating that they are looking to put through price increases in a variety of industries which may lead to inflation being more sticky than markets are currently pricing.

There will be a deluge of corporate news for the next month as earnings roll in. Last week, we got positive production updates from BHP and Newcrest (NCM) with both posting better than expected production and costs. Pendal (PDL) confirmed the completion of its TSW acquisition, doubling the company’s U.S. funds under management, and noted positive reception from TSW clients. Lendlease (LLC) announced the sale of its services business for $310 million which is set to close in November. The move is a positive step as the company continues to shift its focus to urban regeneration and asset management.

Positively for banks, APRA announced that it will provide support for banks offering temporary financial assistance to borrowers following the recent lockdowns by providing capital relief for eligible loans entering deferral for a period of up to 3 months. Shortly after the announcement, ANZ announced a $1.5B buyback, indicating that banks are comfortable with current conditions despite the lockdowns and are still in a very strong position.

On the impact of recent lockdowns and continuing high levels of cases in NSW, we saw the preliminary services activity survey fall off a cliff and into levels that indicate contraction. Data coming in over the next month should start to reflect the impacts of lockdowns as well and we expect business and consumer confidence, as well as employment figures, to weaken significantly. Economists currently expect Australia to escape a recession with activity rebounding strongly in the next quarter assuming restrictions ease, but we remain more sceptical until we start to see progress over the number of cases in NSW.

This week, Australian inflation figures will be on tap and are expected to be well above the 2% target due to base effects. In global headlines, we get readings on U.S. consumer confidence and preliminary U.S. GDP estimates for Q2. The Federal Reserve will also hold a policy meeting, though no moves are expected but investors will be watching commentary about tapering, inflation and the outlook for potential hikes. Global earnings season will also heat up as tech majors will all report this week alongside key consumer spending barometer, Visa, and key industrial growth barometer, Caterpillar.

Over the past 14 months since the initial nationwide lockdowns, Australia has faced multiple state-based lockdowns with little impact on the broader nationwide recovery. The delta variant and the recent slate of lockdowns, especially in Greater Sydney, poses a different issue. Firstly, the domestic economy had already largely recovered to pre-COVID levels and were well off low activity levels. Secondly, growth was already slowing as we move from the recovery phase into the normalisation phase.

With Greater Sydney facing a prolonged lockdown that will likely last for longer than expected given that cases infectious in the community are showing no signs of slowing, as per the chart below, it is likely that Australia will see negative growth this quarter. 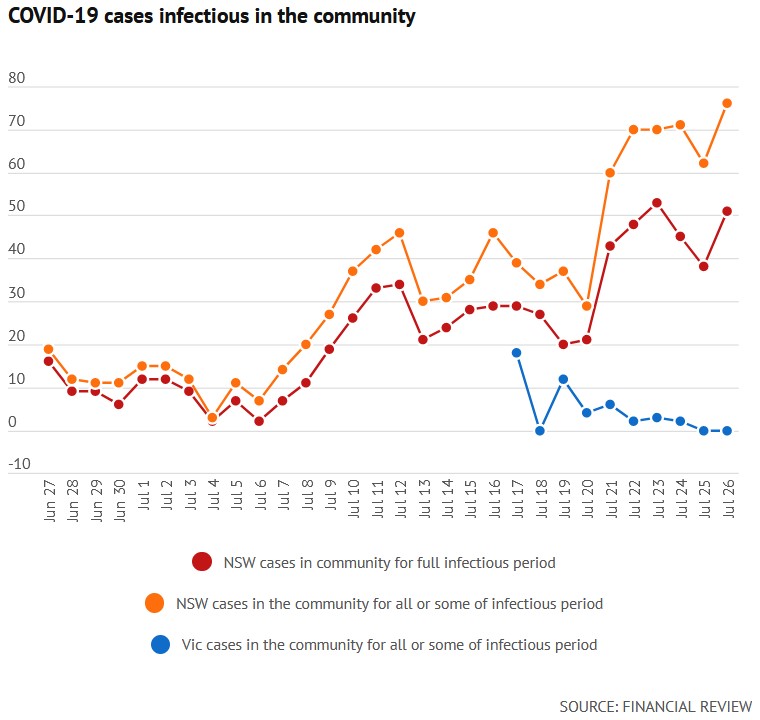 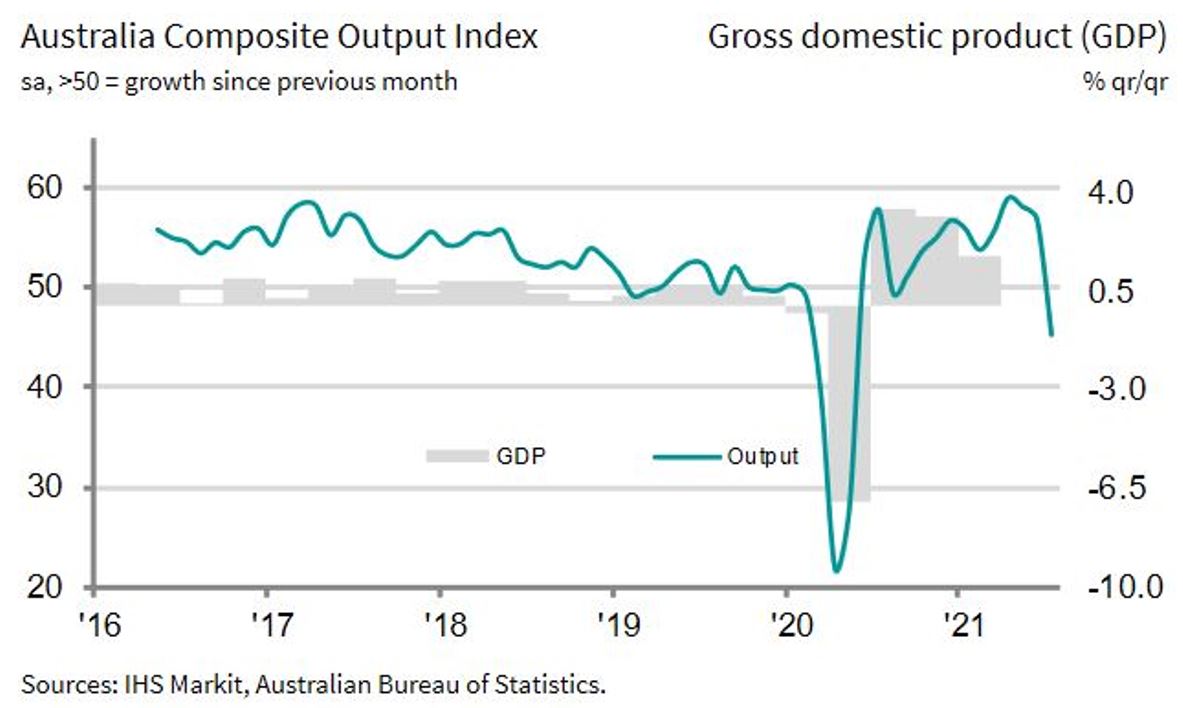 The indicators have shown that both manufacturing and services activity have been slowing for a few months, but the latest lockdown has seen services plunge below the 50 mark that indicates a contraction. Manufacturing remains in expansionary territory but is losing momentum. 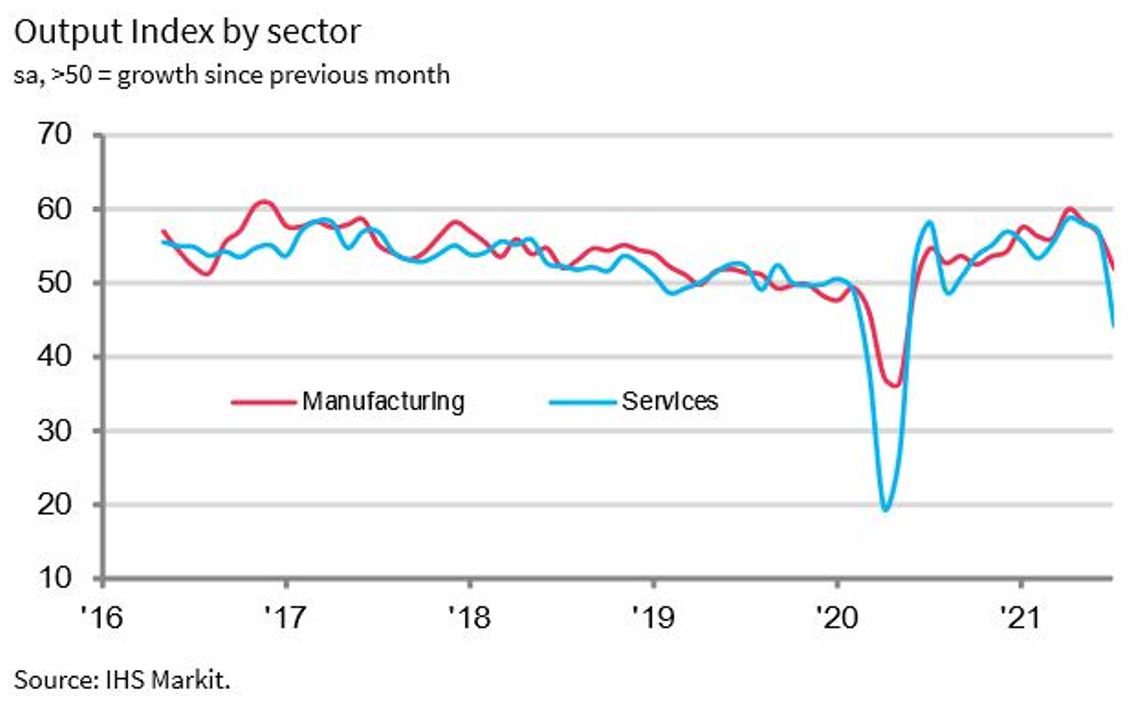 As a result, we are less optimistic on the recovery in Australia but the domestic equity market remains well supported by the global recovery as many sectors such as mining and healthcare source the majority of revenue from overseas customers. Within our Australian equity portfolio, we do not expect our exposures to be heavily impacted by the domestic slowdown. The bulk of the portfolio have earnings that are largely global in nature. Of those with predominantly local earnings, these tend to be in the more resilient segments such as grocery or telecommunications. We believe the portfolio is well-positioned to weather the current domestic slowdown and we will be monitoring the market closely for opportunities that may arise if any areas start to price in an overly pessimistic scenario.