The US market led the charge in a shortened week, with the S&P500 bouncing an impressive 6.4% and the technology heavy Nasdaq rising 7.4%. Equity markets bounced back around the globe, with bond yields falling on signs of cooling economic growth. The STOXX Europe 600 rose 2.4%, the Japanese Nikkei 225 Index rose 2.04%, and the Chinese CSI 300 Index rose 1.97%.

Australian shares lagged global peers on a relative basis but still finished the week up 1.6%, as measured by the S&P 200. Large caps outperformed the Small Ordinaries, which rose 1%. The best performers were the Technology (+8.2%) and Property Trust (+7.25%) sectors, which benefitted from falling bond yields. The laggards were the Energy (-4.6%) and Materials (-4.8%) sectors hit by global recession fears, which could hurt the commodity demand outlook.

Economic data released during the week showed promising signs that Fed tightening was beginning to have the desired effect of taking some heat out of the economy. US preliminary Purchasing Manager Indices (PMI) of June manufacturing activity came in well below forecasts. Manufacturing input inflation fell to the lowest level in five months, while growth in the prices companies charge reached its lowest level since March 2021. Consumer inflation expectations also stabilised (explored in further detail below), and consumer sentiment came in weaker than expected. The weak economic data saw government bond yields fall significantly, with the US 10-year falling to near 3.1% after peaking last week at 3.5%. Sluggish economic growth may help bring inflation down without aggressive hikes from the Fed.

RBA Governor Philip Lowe reiterated that the RBA would decisively act to bring inflation down before it becomes entrenched. He suggested that a 0.75% hike is unlikely in July. He also emphasised that wage growth should cap out at roughly 3.5% as regular pay rises of 4 to 5 per cent risk entrenching higher inflation and a wage-price spiral. The commentary led the 10-year bond yield to fall 42 basis points to 3.71%, as investors reassessed and downgraded rate bets.

There was similar market reaction in Europe, with bond yields falling on fears of an economic slowdown. The composite Purchasing Manger Index readings, including services and manufacturing, fell to the lowest level since February 2021. UK inflation accelerated to 9.1% YoY, while business confidence slumped.

China’s Loan Prime Rate was held steady as expected as Chinese authorities continued to talk up infrastructure stimulus while trying to retain the progress made on household deleveraging over the past year.

For the week ahead, a fall in Australian retail sales is expected. Eurozone CPI inflation will likely continue to rise while unemployment should fall. Chinese Purchasing Manager Indices are expected to improve as the country reopens. Consumer confidence and personal spending releases will give a read on the health of the US consumer.

Inflation expectations have an important impact on wage growth and price inflation. If employees expect inflation to be low, they are more likely to accept a lower pay rise. However, suppose employees expect inflation to be high in the coming period. In that case, they will push for a more significant raise to ensure their real purchasing power does not go backwards. They are also more likely to unionise or partake in industrial action to gain more leverage over their employers. The same goes for businesses in setting their prices. If they expect inputs, including labour, to be higher going forward, they will choose to raise the prices they charge.

Inflation psychology can be a self-fulfilling prophecy. Expectations of future inflation can contribute to that same inflation being realised. And the longer inflation remains high, the more likely consumers and business inflation expectations become entrenched.

Central Banks worldwide are taking decisive steps to crush inflation back down to target ranges by ‘front-loading’ interest rate hikes. By pushing through steep hikes early and maintaining an aggressive path, it is hoped they will break the back of inflation before it becomes entrenched.

There are a couple of methods to measure inflation expectations, including surveys of consumers and market-based measures.

The University of Michigan Inflation Expectations measures the percentage that US consumers expect the price of goods and services to change in the next year and between years 5 and 10 in the future. There was some good news on this front last week. Longer-term consumer inflation expectations settled at 3.1% from the preliminary reading of 3.3%, potentially reducing the urgency for steeper rate hikes. One year inflation expectations also pulled back slightly, although it remains elevated. 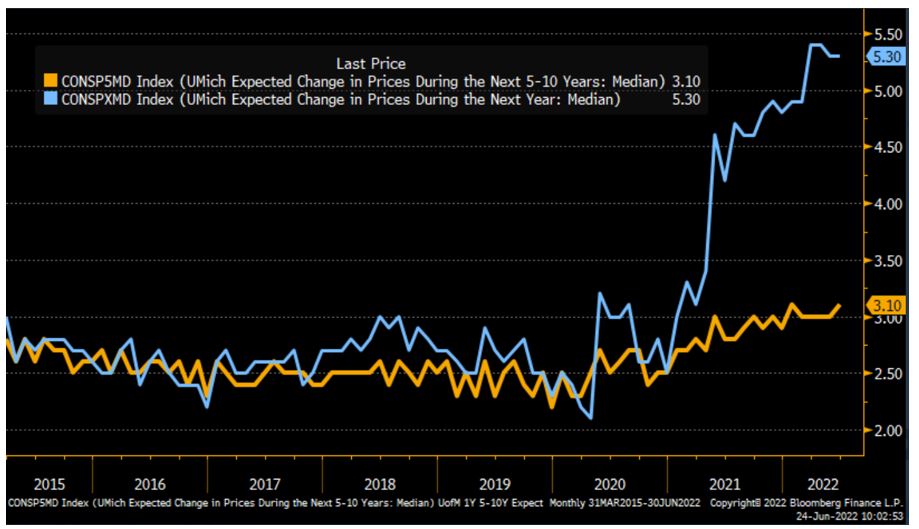 Market-based measures of inflation expectations have also fallen from recent highs. These measures are important because market participants have substantial financial resources at stake and have strong incentives to be correct. Inflation breakevens are derived from the difference between inflation-indexed and fixed-income bond yields. The fall in breakevens demonstrates increasing confidence that long-term inflation will be controlled. 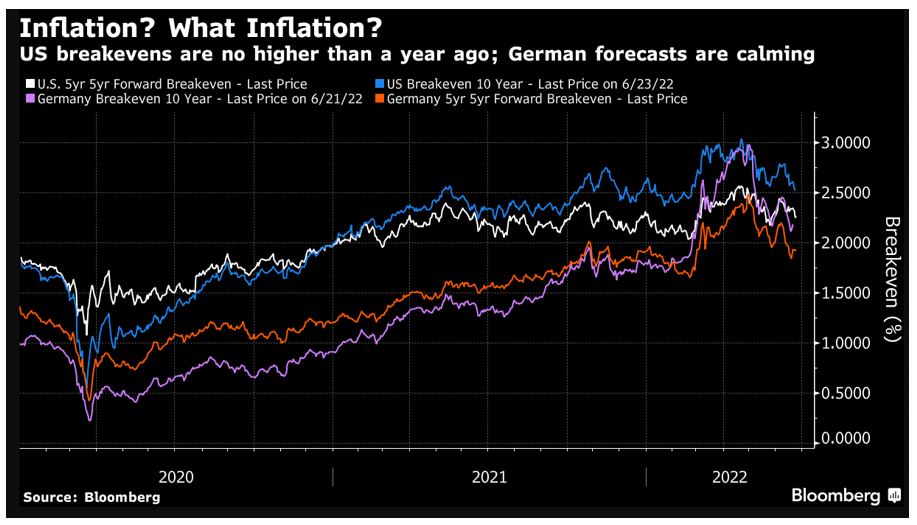 Consumer surveys and market-based pricing suggest that inflation expectations have not become unanchored despite some Fed governor concerns. This is indicating that decisive Central Bank action is having the desired effect and interest rates may not need to be raised as high as initially feared. While this would be positive for risk assets, the outlook is still highly uncertain. Raising rates aggressively increases the odds of a policy misstep by crushing growth and triggering a recession — a risk markets are increasingly pricing in.