The Australian S&P/ASX 200 had a volatile week, suffering the worst trading day since February before recovering later in the week to end down 0.8%. The fall was led by concerns that Chinese property giant Evergrande would implode, with debts of over US$300 billion, and potentially set off an economic crisis in the world’s second-largest economy (explored in more detail below). The Energy sector performed strongly, rising 4.9%, while the Materials sector was the worst-performing sector falling 2.6%, weighed down by the weakening iron ore price. The U.S. S&P500 was also volatile, though it managed to eke out a small gain for the week.

Bond yields rose again, with the U.S. Fed signalling a faster reduction in bond buying and the Bank of England signalling growing concerns about a rise in inflation. The Fed will taper “soon” if “progress continues broadly as expected”. A gradual tapering could begin as early as November and could conclude by mid-2022. According to the Fed dot plot, more Fed members now see a first-rate hike happening in 2022. Markets responded positively to this news as it demonstrates the economy is recovering well from COVID-19, and that the Fed will continue to support the market near-term, by only gradually removing stimulus.

In company news, Transurban (TCL) and a consortium of investors will pay $10 billion for the remaining 49% of WestConnex. Transurban is raising $4.2 billion with $3.97 billion via an entitlement offer and the remainder with a placement to Australian Super. The purchase was within consensus expectations on price. It will take several years for the project to be fully completed.

Westpac’s (WBC) sale of Papua New Guinea assets will not proceed due to PNG’s regulatory decision to deny authorisation for the transaction. This is a minor negative to Westpac’s strategic plan to divest non-core assets and cut costs, but on an accounting basis, it is likely to reverse the write-down taken in the previous fiscal year. We see this as a minor bump in the road and do not expect Westpac to fully deliver on its ambitious cost-out targets, but the market is already pricing this in.

For the week ahead, we will get an update on Australian retail sales, which are likely to fall again due to the impact of lockdowns. Australian building approval and home lending data will be released towards the end of the week. China Purchasing Manager Index should show some level of snapback given Delta outbreaks are largely under control.

The hot topic for markets over the last week centred on Evergrande, China’s second-biggest property developer, which is in severe financial distress. It has over US$300billion in debt and this enormous debt pile has left it vulnerable to a weaker property market. Two weeks ago, the company issued a public statement admitting it was facing “unprecedented difficulties”, raising fears they are short of cash and may not meet their debt obligations. The potential collapse sparked concerns that it might destabilise China’s financial system and be China’s Lehman Brothers moment.

Major concerns were raised by the behemoths links to the broader property sector and Chinese economy. The property sector has been a growth engine of the Chinese economy, making up over 25% of gross domestic product (GDP). Further, the company directly employs over 160,000 people, and more than 3.8 million jobs are tied to its activities.

Market concerns were partially allayed when Evergrande announced it would make a coupon payment on its domestic bonds. However, risk remains with the company silent on a payment of $83 million in interest due to international bondholders due last week. The firm now enters a 30-day grace period to make this payment; if they fail to do so, they will default, which could reduce foreign investor demand in the future.

There is debate over whether the Chinese government will step in to bail out Evergrande and their investors. On one hand, the government will want to make an example of Evergrande to banks, other developers, and investors, to encourage them to rein in financial excess and stop taking on too much debt. This course of action would be in line with stated goals of “common prosperity” and reducing property speculation.

On the other hand, the Chinese government will be desperate to avoid a crash that risks destabilising the broader property sector and could spread to other sectors of the economy. A property market crash would punish average citizens who have their wealth tied up in property and smash consumer confidence.

On balance, Chinese authorities will likely favour restructuring Evergrande’s debt to reduce this contagion risk. The People’s Bank of China took action to support the financial system through the injection of US$71 billion of short-term cash into the banking system over the past week, showing they will take action to avoid a calamity.

We will be closely monitoring what transpires over the coming month and look for signs of a turnaround in China as potential opportunity to re-enter the market.

You may be asking yourself what impact Evergrande’s financial woes will have on Australia. As China’s second-largest property developer, Evergrande uses huge volumes of steel in construction, steel that requires Australian iron ore. The Chinese construction sector accounts for half of all Chinese steel consumption. There is a risk that Evergrande’s struggles will make it difficult for other property developers to source new financing, smash investor demand for new apartments, slowing construction activity and in turn, reduce demand for Australian iron ore. 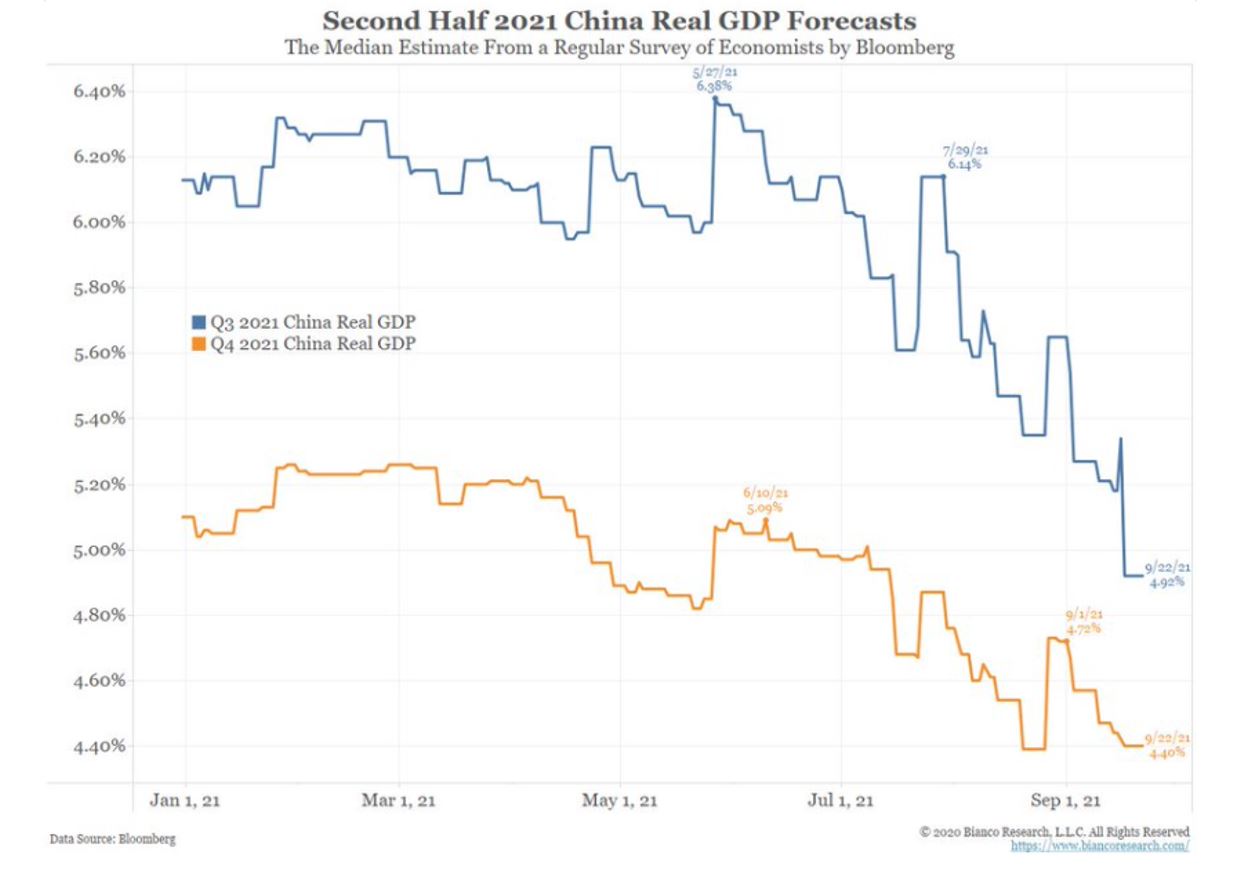 Whatever intervention the Chinese authorities take, it appears Chinese economic activity will slow, especially in the construction industry. As the chart above shows, GDP growth expectations have dipped for both Q3 and Q4 2021. With this backdrop, it now appears unlikely that iron ore will return to the halcyon days of record highs, seen as recently as May, anytime soon.