Equities largely moved higher as bond yields stabilised, though tech continued to underperform. The S&P/ASX 200 was an outperformer, with a 1.7% gain whilst the S&P 500 and MSCI World gained 1.6% and 1% respectively for the week.

Commodities were mixed as industrial metals took a breather whilst oil got a boost as a supertanker blocked the Suez Canal, a key shipping route for global trade. A large portion of oil traffic sails through the Suez Canal, and alternate routes can take more than a week longer to sail through.

On the economic front, data released was mainly U.S. centric, with fourth quarter GDP beating expectations. Biden signalled further stimulus despite the recent passage of the $1.9 trillion stimulus package. This comes in the form of a potential $3 to $4 trillion infrastructure package focussed on technological and green infrastructure initiatives. Further details are expected this Wednesday but the final form will likely look different as it has to go through the various approval channels. On the flipside, it is likely that this will be funded by higher corporate taxes and income tax on high earners.

Merger and acquisition activity also continues with easy monetary conditions. Locally, Blackstone has made an $8 billion bid for Crown (CWN) which equates to $11.85 per share. Bapcor (BAP) bought 25% of Tye Soon, the largest independent auto parts distributor in South East and North East Asia, with completion expected in April. BAP sees this as a low-risk way to accelerate its expansion into Asia. Tye Soon also owns Imparts in Australia, with 20 outlets primarily servicing luxury European brands.

Other corporate news includes good news for BHP and bad news for Westpac (WBC). BHP won against a $9 billion lawsuit for the 2015 Samarco disaster in the UK as the judge deemed that it was a double up of an already previously settled lawsuit in Brazil. Meanwhile, WBC’s New Zealand arm was ordered by the Reserve Bank of New Zealand to hold additional capital and commission independent reviews into risk culture after a series of mishaps over the years. As a result, speculation that Australian banks may be looking to spin-off or sell their New Zealand branches is heating up again.

Meanwhile, travel stocks have been hurt as local transmissions were recorded in Queensland, with Brisbane heading back into lockdown. This, along with recent lockdowns in Europe, highlights that despite all the recovery optimism, the situation remains fragile until vaccination rates are much higher. Domestically, snap lockdowns have worked fairly well for Sydney, Adelaide and Melbourne. We hope and expect that Brisbane will be equally successful in avoiding more prolonged and stringent restrictions.

Looking ahead, we get Purchasing Manager Indices (PMI) readings across most major economies. PMIs are a key forward indicator for economic growth and have recently been riding a strong wave of recovery momentum which is expected to continue as the effects of the pandemic begin to fade. In the U.S., we get two key data points in consumer confidence and employment figures, with both expected to strengthen thanks to easing restrictions and strong vaccination numbers.

The chart below shows the amount of fiscal stimulus for COVID-19 dwarfs the amounts seen in the 2008 financial crisis easily, with the U.S. leading the pack by a wide margin, both in terms of dollar amount and percentage of GDP. 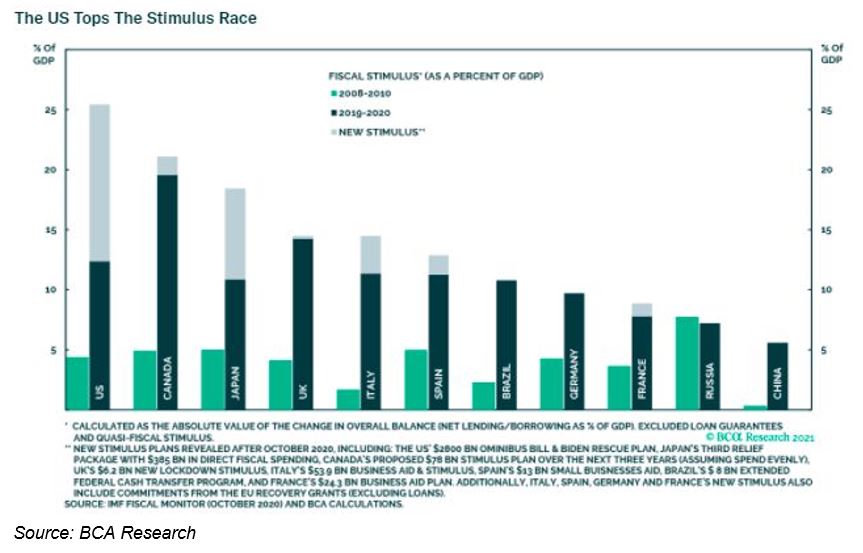 On top of this, we are now hearing of plans for a further infrastructure stimulus package in the $3 trillion range. If $3 trillion ends up being the final amount passed, this would be almost another 15% of GDP, taking U.S. fiscal stimulus to 40% of a year’s GDP. Furthermore, we expect more stimulus to come out of other countries.

As a result of this rush of stimulus, we expect economies to rebound strongly over the next couple of years despite pandemic induced mobility restrictions, particularly for international travel, likely to remain in place in some form for several years to come. This will likely feed through to industrials, commodities and domestic consumption. This is positive for Australia, with its large proportion of commodity driven exports, from agriculture to energy and metals. As such, we expect that the strong economic momentum shown in domestic data over the past will continue.