The S&P/ASX 200 was largely flat, underperforming the MSCI World’s 1% return, largely driven by the S&P 500’s grind higher, finishing up 1.7% for the week after notching seven straight days of record highs.

Tech and utilities were a drag on the ASX 200, whilst the telecom sector was the best performer as Telstra (TLS) bounced after it announced the sale of 49% ownership of InfraCo Towers for $2.8 billion several months earlier than expected and at a better price than anticipated.

We are currently in the middle of the usual confession season where companies tend to provide updates on whether they will fall short or surpass guidance when they report. As such, we saw Lendlease (LLC) downgrade but market reaction was relatively muted as investors await details to be released at its full-year report on the progress of the business review. As expected given extended lockdowns, the UK exposures were a drag on its core operations. The negative surprise came from a further $90-175 million provision in the Engineering business that has already been sold as it continues to be hit with additional historical claims.

Elsewhere, Bapcor (BAP) updated its 5-year strategic targets, upgrading ambitions for own-brand penetration targets and detailing an ambitious Asian growth target. A2Milk (A2M) bounced a little on the back of appointing a new Chief Marketing Officer with a strong background, whilst Suncorp (SUN) and Westpac (WBC) announced small divestments as both continue to simplify their businesses.

Travel stocks also bounced as the Australian government announced a roadmap to re-open travel, though it is likely that heavy restrictions will remain in place well into 2022.

Economic news was largely dominated by US employment data which showed a better-than-expected 850,000 jobs were added, whilst wages were slightly weaker than expected, growing 0.3% over the previous month. However, the unemployment rate rose to 5.9% as more people entered the workforce.

Consumer confidence in both US and Europe also continued to strengthen as both continue to unwind restrictions on the back of strong vaccination rates, though it remains to be seen if a recent uptick in the delta variant can dent the current optimism.

The Reserve Bank of Australia’s (RBA) policy meeting will be the one to watch in the week ahead. The RBA is likely to extend its current Quantitative Easing (QE) program, but recent strong data has led to economists expecting this to be tapered. The recent outbreak of the delta variant may complicate this view though.

We will also see ANZ’s job ad data and Australian retail sales for May.

A common Warren Buffet quote is to ‘only buy something that you’d be perfectly happy to hold if the market shut down for 10 years’. Evidently, Buffet’s popularity has waned over the years as holding periods have continued to trend lower, with investors becoming more like gamblers. 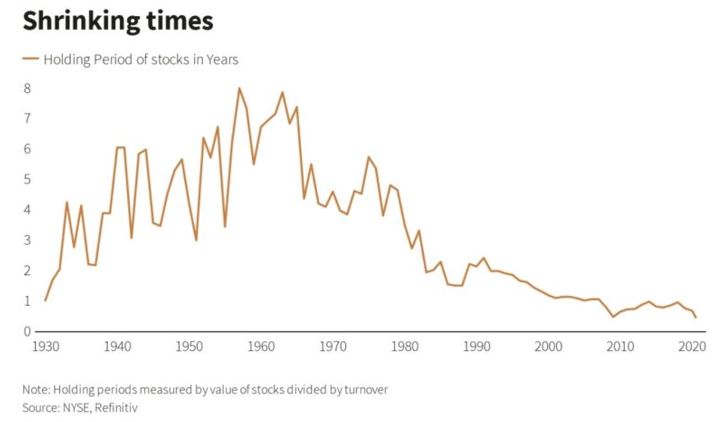 The average holding period has fallen to less than one year since the financial crisis in 2009, recovering ever so slightly over the following 10 years before the pandemic brought the gambling mentality back. Given the blistering pace of the rebound and the sharp rotations from growth to value over the past 18 months, it is no surprise that investors are turning over positions more quickly.

Despite the change in trend, investors should not forsake the wisdom of the Oracle of Omaha and continue to focus on quality stocks that they are comfortable holding for long periods. In the long run, quality companies still tend to outperform the broader index despite the recent drop in holding periods. This can be seen in the chart below which plots the iShares MSCI World Quality index ETF (dark blue) against the iShares MSCI World index ETF (light blue), with the former outperforming the latter by 18% over 5 years on a cumulative basis which is just over 2% per annum.