Happy Easter to all!

Bond yields were back up to recent highs last week as US President Biden unveiled a USD 2.25 trillion infrastructure plan to be funded by a corporate tax hike. The plan was somewhat smaller than the USD 3-4 trillion expectations just a couple of weeks ago, but President Biden did indicate that a second part of the recovery package would be unveiled in a few weeks.

Unlike earlier bouts where equities were roiled by higher yields, the S&P 500 surged nearly 3% higher. High growth stocks rose strongly as there were signs of waning momentum for the rotation trade. The S&P/ASX 200 was largely flat for the week, dragged down by the energy sector as OPEC+ announced that it will gradually ease its oil output cuts, starting with 350,000 barrels per day in May, another 350,000 reduction in June, and 400,000 in July for a total addition of 1,100,000 barrels per day on the supply side.

The US markets strength was underpinned by strong economic data. Consumer confidence and Manufacturing Purchasing Manager Indices (PMIs), which indicate future activity, were much stronger than expected. Furthermore, employment figures released on Good Friday of 916,000 jobs added was far beyond the 647,000 consensus estimates, driving the US unemployment rate down to 6%. Though US markets were closed on Friday, the market rewarded the strong figures with a rally Monday night.

In company news, Downer EDI (DOW) and Transurban (TCL) both announced completions of previously disclosed deals, with DOW completing the 70% stake sale of the laundries business and TCL finalising the 50% stake sale in Transurban Chesapeake.

Commonwealth Bank (CBA) and Macquarie Group (MQG) both had slaps on the wrist from regulators, with CBA sued for overcharging customers due to human error and faulty systems, whilst MQG was required to hold more capital following APRA’s finding of multiple historical breaches of prudential and reporting standards. Whilst unlikely to have a huge impact on earnings, these moves indicate that banks remain pressured by regulators despite the recent positive commentary surrounding the banks’ handling of the pandemic.

Looking ahead, the Reserve Bank of Australia has its monthly policy meeting today and we get Services Purchasing Manager Indices (PMI) readings across most major economies throughout the week.

Last week brought Australian Retail Sales figures that were 0.8% lower between January and February, driven by lower spending on groceries. This was above expectations, but usually one would expect higher retail sales considering the backdrop of a strong economic recovery and employment figures. However, the pandemic’s mobility restrictions and subsequent policy support led to a very different path than most historical recessions.

Mobility restrictions led to soaring sales for food and groceries whilst retail came to a standstill. On the flipside, the chart below shows that savings soared on stimulus, lower retail spending and lack of travel expenses. 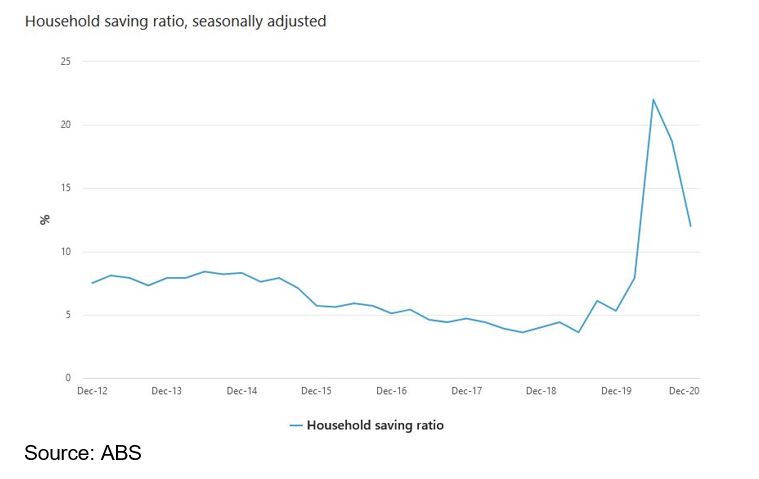 As restrictions ease, the expenditure on groceries has been dropping as expected. Instead, spending on physical retailing and cafes are on the rise as people start to return to pre-pandemic behaviours. Retail sales are up strongly over the year, with almost all categories higher than pre-COVID levels. The chart below offers some insight into this. 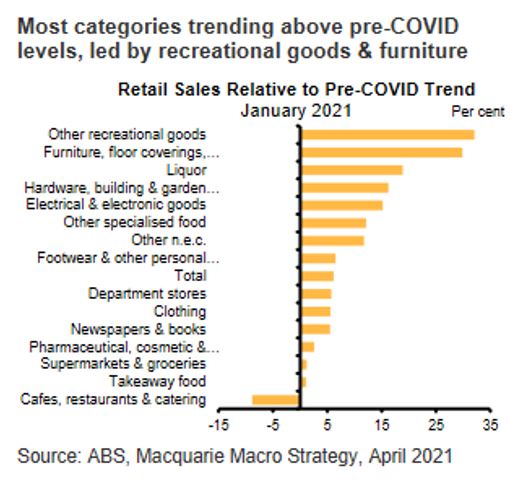 Housing related spend has been the biggest beneficiary as people spend more time at home, whilst electronics also saw a big boost.

Behaviours are likely to continue to normalise, so we expect to see some of these trends reverse. Spending on housing related categories are expected to fall whilst spending on cafes are likely to recover gradually as people spend less time at home and more time out. However, international travel restrictions are likely to remain in place for some time with gradual easing so these trends may only partially reverse over the year. As a result, despite the stellar outperformance of the discretionary sector over the past year, consumer discretionary stocks should be supported by continued strong earnings results.