Equities continued to melt up on earnings strength while the bond market rallied following a tough October. The S&P/ASX 200 gains of 1.9% were in-line with the MSCI World, slightly trailing the 2% gain for the S&P 500. Emerging markets had a tough time as it ended the week flat due to a 1.6% fall in Chinese equities as further lockdown measures coupled with renewed concerns in property debt weighed on the market.

On the ASX, defensive sectors were the best performers for the week. Telecoms rose 4.9% on a strong update from REA Group, with healthcare and staples rising 3.9% and 3.8% respectively. Energy was the only sector in the red with a -1.9% return, but other cyclical sectors were poor performers too, with materials rising just 0.3% as iron ore prices resumed their tumble.

The sharp spike in yields took a breather as the Reserve Bank of Australia formally abandoned its yield curve control program and toned down its commitment to a first rate hike in 2024 while maintaining some dovishness by reiterating its commitment to buying $4 billion in bonds per week until February 2022. The U.S. Federal Reserve (Fed) also met last week and announced a taper of its quantitative easing program as expected. The Fed will begin reducing its bond purchases by $15 billion per month starting this month. At this rate, it would take until the end of June 2022 to end the current round of quantitative easing (QE), with the Fed reiterating that it would not raise rates before the end of its QE program. The result of a hawkish move but dovish comments from both central banks led to the Australian 10-year yield falling nearly 0.3% to finish the week at close to 1.8%, and the U.S. 10-year yield fell 0.1% to 1.45%.

Last week was a busy one for economic data, headlined by October’s Purchasing Managers Indices (PMIs) and U.S. employment data. PMIs, a survey often used as a leading indicator for economic activity, were positive, with Australian readings indicating a return to growth as NSW and VIC continue to ease restrictions. U.S. Services PMIs re-accelerated as the impact of the delta variant recedes and European readings remained resilient, but Chinese readings remain mixed as the country struggles with debt issues and continued waves of restrictions. On U.S. employment, jobs grew more than expected and the unemployment rate fell to 4.6%. Average hourly earnings grew strongly again at 0.4% over the previous month, in-line with consensus but remains well above pre-pandemic trend levels. Overall, U.S. employment still has significant room to recover relative to pre-pandemic levels and other data such as unemployment claims and job openings point to further strength in the U.S. job market.

In corporate news, several companies provided upbeat trading updates including REA Group (REA), Goodman Group (GMG) and Charter Hall (CHC). We see all three as high-quality companies and continue to be happy holders of REA and GMG in our models. Amcor (AMC) also provided a solid update that was in-line with expectations, with management capably managing rising costs and supply issues.

Pendal (PDL) and Westpac (WBC) released full year results, with PDL largely in-line with consensus expectations while WBC disappointed on both earnings and size of its off-market buyback. PDL guided to higher-than-expected costs but net flows of funds under management will likely continue to drive the stock. We trimmed our model position in the $8s a few months ago but are holders at current levels on the attractive valuation and yield. WBC sold down significantly following the earnings miss but the market looked to be particularly disappointed on the size of the off-market buyback and cost guidance. A lot hinges on its ambitious cost-cutting strategy but cost guidance was ambiguous and the market does not like the uncertainty. We continue to hold a position in WBC, in-line with its market weight, as it continues to trade at relatively attractive valuations compared to peer banks, however, we would need to see progress on the cost targets to move to an overweight position.

Downer (DOW) and Suncorp (SUN) were other names to report some marginally negative news. DOW provided a weak trading update that was impacted by lockdowns but noted that demand remained strong. We expect DOW to benefit from the easing of restrictions which should result in strong growth for the rest of the financial year. Meanwhile, SUN provided an update on estimated hazard costs which are now well above provision levels for the first half. SUN does have strong reinsurance cover and looks likely to be less impacted than IAG. We remain positive on the company as it continues to make progress on its efficiency drive while rising yields and premium pricing across the market continue to provide positive tailwinds.

On tap this week are domestic employment, business confidence and consumer sentiment readings. Markets will also be watching U.S. inflation readings closely alongside any reaction to the passing of the $1 trillion bipartisan physical infrastructure package. The larger social infrastructure package remains in limbo despite being cut down from $3.5 trillion to $1.75 trillion according to recent reports. Chinese liquidity and monthly economic activity readings will also be a point of interest.

Domestic employment was having a ball prior to the recent round of lockdowns, with total number of employed people and the unemployment rate surpassing pre-pandemic levels. Unsurprisingly, the prolonged restrictions in NSW and VIC drove lay-offs and resulted in Australia shedding over 280,000 jobs between July to September. As the chart below shows, unemployment rates in other states did not see as much of an impact as any lockdowns were short-lived. 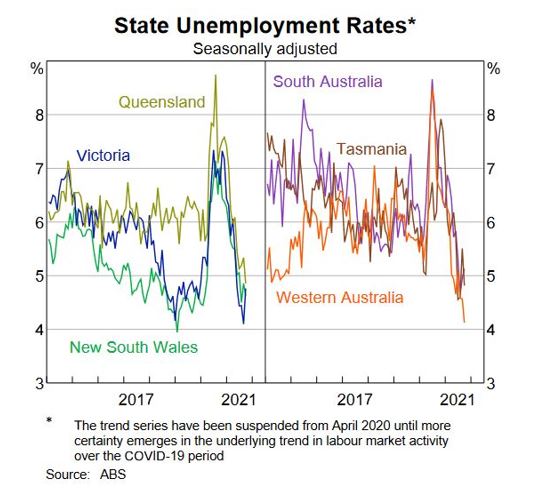 October employment figures will be released this week and is expected to see a return to positive territory, with consensus estimating a gain of 50,000 jobs. We agree that employment should improve quickly as NSW and VIC ease restrictions, and we expect a quick snapback as other leading indicators such as business confidence and job ads remained resilient. 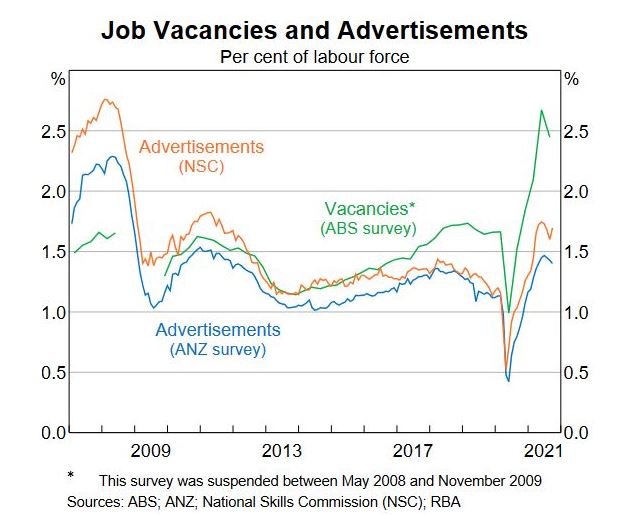 Over the past few months, overall unemployment rate was actually flat at 4.6%, owing to a lower participation rate as people gave up looking for jobs altogether. We do not see this as a good indicator for the health of the labour market at this stage, given the impact of the pandemic and ensuing restrictions on the participation rate. Instead, we continue to focus on the underemployment rate which includes those who have jobs but want to work more hours, along with the total number of jobs added and total people employed. As seen below, the underemployment rate showed a significant spike since July, after initial lockdown measures began while the headline unemployment rate moved lower. 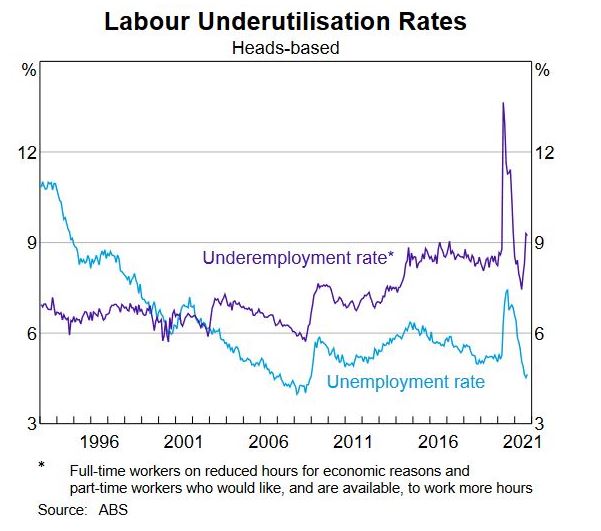 We are expecting a sharp fall in the underemployment rate in the coming months, though October may still be too early for a significant improvement. We continue to expect a sharp rebound as restrictions ease this time around as there is a much lower likelihood of further rounds of restrictions given vaccination rates. As a result, we remain positive on cyclical exposures and continue to see yields moving higher in the medium term.