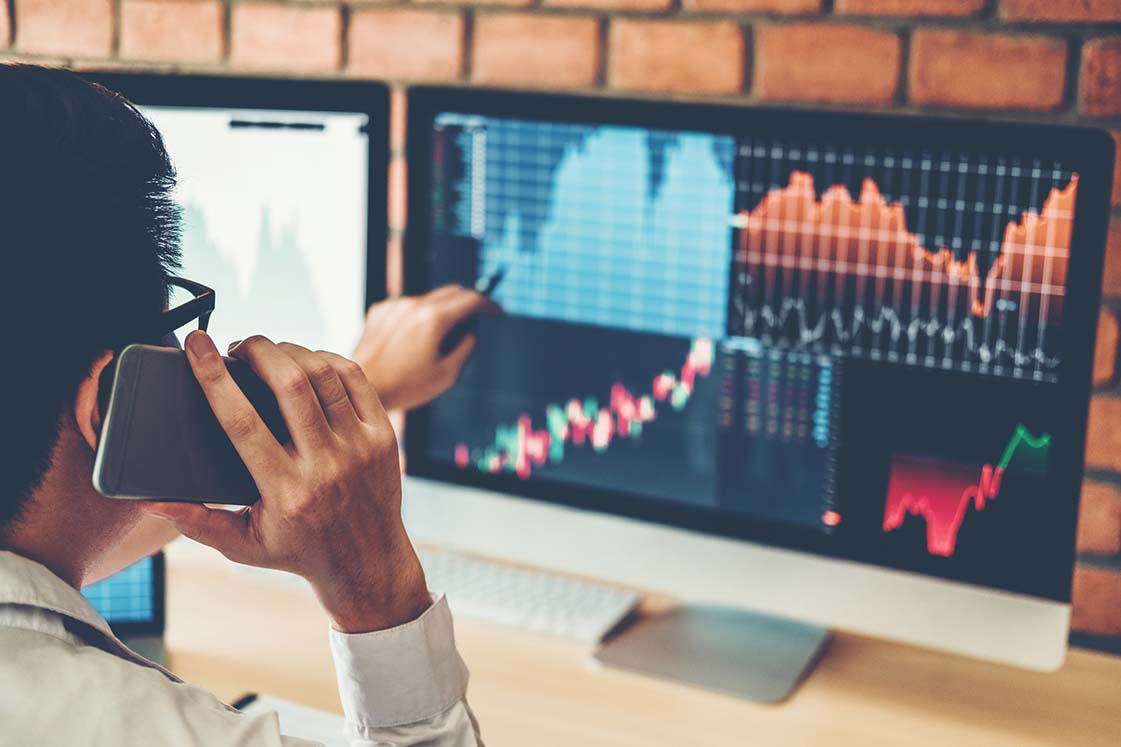 It was a quiet week on the trade front albeit the Chinese government have said they would expect the US to roll back existing tariffs for them to be able to commit to the type of agricultural buying quantities President Trump had alluded to at last week’s supposed agreement.

This issue will again likely escalate as we get closer to the next planned tariff implementation date by the United States, being the 15th of December 2019

The data continues to defy the weakness seen in job advertising – skilled vacancies are -6% on last year and the wider ANZ job advertisement figures are down -11% on 2018.

Chinese Q3 GDP grew at an annualised rate of 6% which is the lowest figure since the data series started nearly 30 years ago in 1992.

China’s economy continues to soften as the impact of US tariff’s on US$360bn of Chinese exports to the US weighs, though we would expect to see continued, measured fiscal and monetary stimulus afforded by authorities to mitigate the significant slowing.

US housing sector trends remain positive with the October NAHB Housing Market Index jumping again in October and just shy of the record optimism we saw in the sector back at the start of 2018.

IOOF confirmed our expectations and announced last week that they were set to complete the ANZ Wealth transaction and at discounted price.

Having announced the planned acquisition of ANZ Wealth for $975m as far back as November 2017, the two groups finally confirmed the transaction would go ahead last week, and at a nicely discounted price of $825m.

We think the shares will settle above $8+ before the year ends now that the corporate uncertainty is beginning to lift.

In a highly fragmented industry where the landscape is awash with the opportunity to consolidate and rationalize cost, we think 11x 2021 earnings is simply way too cheap for a company with the industry positioning and strength of cashflows that IFL has.

This stock will continue higher in the years ahead.

Challenger reported a resilient first quarter in the face of falling interest rates and the stock bounced accordingly.

The stock bounced over +10% last week after surprising investors with strong net annuity sales growth in the Q1, albeit via the lower margin wholesale channel and via higher risk guaranteed income products.

The market response demonstrates that investor expectations are very low for CGF and that should we see an improvement in the domestic retail channel as the post-Royal Commission advice disruption settles, then CGF shares can go a lot higher.

Afterpay shares were one of the worst performers during the week, falling -17% after UBS initiated coverage of the stock with a contrarian SELL rating.

The prevailing issue raised in the report was APT’s ‘no surcharge’ clause which prevents merchants from passing on the cost of APT’s platform back to the consumer in a manner such as that done by the likes of Mastercard, American Express and Visa.

The suggestion being that if merchants were in the position to do this, potentially the Afterpay platform might lose its appeal with customers.

The RBA announced last week it would conduct a review into the ‘buy now, pay later’ sector to determine whether retailers required help recovering the costs.

We think it’s quite likely that this issue will prove to be as impactful on APT as investor fears were over the Senate and ACCC reviews of predatory lending and the more recent AUSTRAC investigation of APT over money laundering issues.

Our recommended positions on APT have been significantly reduced in recent months as we felt the stock was beginning to price in much of the blue-sky opportunity, however we remain committed to the long-term growth story and retain a recommended holding.

Weakness like that seen last week opens up the opportunity in time to potentially add to holdings again.

Boral was the subject of M&A chatter during the week with The Australian publishing an article suggesting US private equity giant, Lone Star, could be considering a bid for the company.

The stock bounced modestly but not with the vigour that might imply investors thought a bid was soon to arrive.

That said, BLD’s business is widely disparate and has the makings of a break-up for any financial or corporate bidder willing to undertake the task.

We think the underlying demand picture for US residential construction is strong and that expectations on BLD earnings are now quite low, which makes us feel like the risk/reward offered by BLD shares at current levels under $5 look particularly attractive.

We note, with some modest trepidation, that though the Australian share-market is +18% year-to-date and within 3% of its high, that the Australian mining sector has not only foregone its sector leadership, but in fact underperformed quite materially over the last 3 months.

As the chart below shows, the Australian mining sector does a very good job of pre-empting the performance of the wider market.

As the leading edge of the market in a cyclical earnings sense, investor appetite for miners tends to offer an early look at future risk appetite across the wider market.

In red is the ‘relative’ performance of the Australian material sector against the ASX200 benchmark, and the white line is the ASX200 share price index lagged by 6 weeks.

The under-performance of Australian miners since Q2 seems set to presage consolidation in the wider market in the weeks and months ahead.

The slowing Chinese economy is the main culprit for recent weakening in iron ore prices from their July highs at $110/ton to today’s level at a touch over $80/ton.

BHP (BHP) and Rio Tinto (RIO) share prices have under-performed the market by almost -20% since their peak in April, although Fortescue (FMG) has fared marginally better. 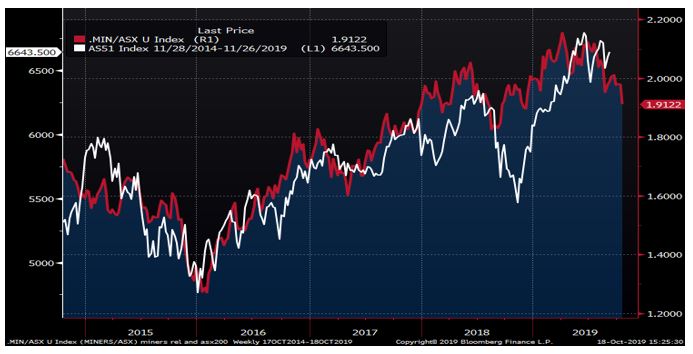 Major corporate results in the US this week will come from Microsoft (MSFT) and Amazon (AMZN), and then the following week will see Apple (AAPL), Google (GOOG) and Facebook (FB) all report.

In Australia, the major banks and Pendal (PDL) will report September year end results in 2-3 weeks.