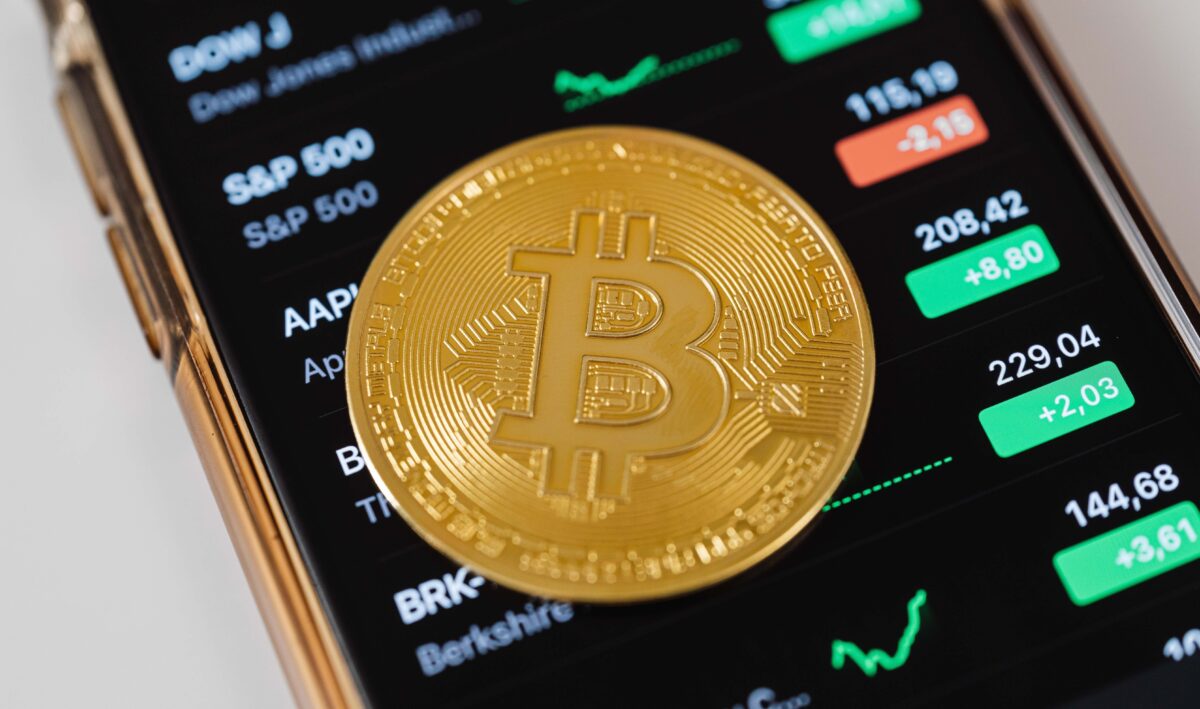 U.S. earnings season was in full gear with 37% of the S&P 500 having reported. 82% have beaten earnings estimates whilst 76% beat revenue estimates. Still, the market fell in its worst week since October as further signs of froth and exuberant investor behaviour hurt the broader market. The S&P 500 fell 3.3%, with year-to-date returns now in the red. The S&P/ASX 200 also fell 2.8%.

Major names across a variety of sectors posted good results, indicating that the corporate recovery remains strong. Based on the current trajectory of beats relative to consensus, FactSet estimates that year-on-year growth over 2020 for earnings per share would just be -2.3%, whilst revenues would rise 1.7%. In a year disrupted by lockdowns, a big economic drawdown and higher costs, such a result would be a great achievement for corporates.

Technology companies Microsoft (MSFT), Facebook (FB) and Apple (AAPL) posted strong results across almost all of their business lines, indicating that the big winners in 2020 continue to do well. At the same time, industrial conglomerates 3M (MMM) and Honeywell (HON) also posted strong beats, supporting the view that manufacturing activity remains strong despite the recent surge in new cases overseas. Consumer spending got a tick as well, with Visa (V) and Mastercard (MA) both posting growth in year-on-year payment volumes, though cross-border transactions volume remains much lower than 2019 levels, showing that travel remains heavily restricted as expected.

Domestic earnings season kicked off with Resmed (RMD) beating top and bottom estimates on Friday as stronger than expected mask sales boosted margins. Amcor (AMC) and REA Group (REA) are among the names due to report this week. For AMC, we remain positive and continue to expect a strong result after positive trading updates. The weaker U.S. Dollar is a headwind, but we continue to expect high single digit to low double-digit growth in constant currency driven by a combination of higher revenues and further synergy benefits out of the Bemis integration. The stock has pulled back in recent weeks making valuations attractive again.

Elsewhere, Newcrest Mining (NCM) posted quarterly production figures, with strong gold production and lower costs as its Cadia mine recorded its lowest ever quarterly cost of production and increased output. The company retained its full year guidance of 1.95-2.15 million ounces of gold, and 135-155 thousand tonnes of copper.

IOOF (IFL) posted quarterly funds under administration (FUA) figures of $202.4 billion for December. FUA fell $400m in the quarter as $12.7 billion in market gains were not enough to offset net outflows. Management attributed $10 billion of outflows to one-off events including $8.1 billion from the termination of the BT relationship and $1.9 billion from the liquidation of its cash management fund and trust.

NAB also announced that it is looking to acquire the rest of digital bank 86 400 for $220 million and intends to combine this with its UBank operations, subject to regulatory approval.

There has been a build-up of speculative excess for several months now, with segments of the market decoupling from fundamentals. Some rallies such as those seen in Tesla (TSLA), Bitcoin and the broader IPO market could be a bubble waiting to burst but there are also many arguments that these are assets of the future and deserve the valuations they have attained. However, in more recent weeks, and certainly making headlines over the past week, is the surge in value of the most shorted U.S. stocks. This has certainly rattled the broader market last week as many investors see it as a warning sign that the market may be in a state of euphoria with this display of utter exuberance and a fine example of the greater fool theory.

Unlike historical bubbles, this one in Gamestop (GME) is just ridiculous as the buyers are readily admitting that the drivers for their buying is not linked to fundamentals at all, but rather momentum and a sense of justice in fighting the wolves of Wall Street. The aim of the buyers is simply to force the short sellers of GME to capitulate and cause a short squeeze by driving the price higher. They have been successful in some ways, as several vocal short sellers have announced that they have closed out their positions. However, this is a prime example of the greater fool theory, whereby someone buys a stock not because of the belief that it is trading at a discount to intrinsic value or growth, but on the view that there will be a greater fool who is willing to pay a higher price. Or in this case, there is the possibility that they just want to feel a part of the movement against the establishment and are willing to lose whatever they have put in. 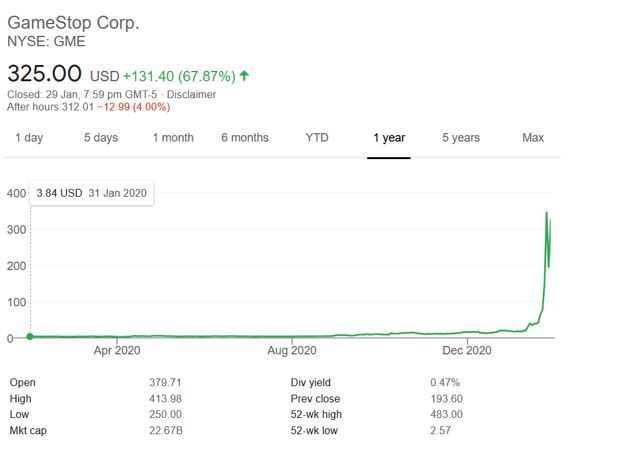 The rally in GME picked up steam in the last couple of weeks, with the stock surging nearly 1,900% so far in January, with gains sitting at 2,800% at one point. In this period, there has been no fundamental news capable of driving such a surge, and GME only traded in the $60s at its prior highs in 2007. It is likely that this will not end well once there are no longer any further incremental buyers. There is no knowing when this will happen, hence those piling into the stock now are simply speculators, betting on greater fools to bail them out.

One does not need to look too far back to examples of what happens during short squeezes. Take Volkswagen in 2008 for example. A short squeeze forced the stock up over 300% but as this abated, the stock was back to pre-squeeze levels within a few months. 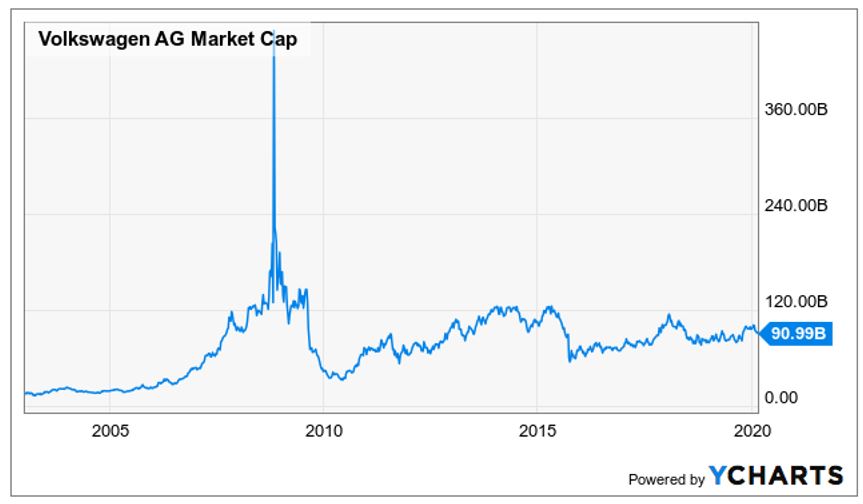 This should be a cautionary tale for any chasing this rally. Without the fundamentals to back it up, it is likely that GME will suffer a similar fate and many buyers lured in by the greater fool theory will likely suffer great losses, whilst only a few will leave with huge profits.

For the broader market, it is not the price of GME that poses an issue, it is the speculative excess that led to the events of the past week. Such speculative excesses generally presage a fall in markets as exuberance and easy money runs wild. The question is whether these events remain contained to smaller segments of the market.

Whilst broader equities are expensive, these are justifiable in the face of low bond yields, large fiscal stimulus and an economic rebound. The hope is that these speculative excesses abate as quickly as they have formed and that there is little spill over to other areas of the markets. However, if it starts to become pervasive in the broader market, another painful bear market may eventuate, one that will likely last longer than the pandemic driven sell-off last year.

Looking ahead, we will be getting the usual start of the month deluge of economic data, with global PMIs remaining a key point of interest alongside U.S. employment figures. Locally, we will see December retail sales and building approvals. The Reserve Bank of Australia also meets, with investors watching for any signals on future monetary policy changes.