Well, we have a lot to cover today.

Once again this week, the market did absolutely nothing. Once again it struggled for momentum.

For three months now we have traded in the same 2.5% range, but with wild intra-day volatility. And though I think this trait will continue to plague Australia’s large-cap stocks for the next few years, I do think the ASX200 has the room to push a little higher through reporting season.

Reporting Season kicks off next week – will get busy

CBA will be the big focus when they report next Wesdnesday, particularly in light of today’s eye-watering headlines.

Yesterday, AUSTRAC, Australia’s financial crime authority, sued the CBA in relation to over 50,000 alleged cases of money-laundering through the bank’s ATM network.

The headlines are far from helpful, and the early press indication points to a material fine for the bank, however note that even a fine in the $1bn range equates to less than 1% of the market-value of CBA.

Far be it for me to make excuses for CBA as the stock is and remains a fully-valued share, but it’s very important to understand the context around this potential fine.

The AUSTRAC fine is unlikely to rock the boat too much for CBA, but when you trade on 15x earnings, have a very modest growth outlook and are the biggest holding in most investor portfolio’s, what is also true is that there are few investors rushing out to buy the share when it falls.

That is perhaps most telling.

Next week’s numbers from CBA I would expect to be fine.

The major banks have spent much of 2017 re-pricing higher their mortgage books, and this should be reflected in improving net-interest margins – Suncorp (SUN) on Thursday demonstrated a healthy expansion in NIM’s.

RIO figures were a shade below market expectations, but perhaps you could argue the market had been overly optimistic.

That said, RIO’s net debt continued to fall and ended the period at only US$7.6bn which is well below the company’s targeted gearing level allowing RIO to extend their share buyback of RIO PLC shares by a further US$1bn.

Iron ore prices year-to-date are well up on the 2016 average of $53/ton and well ahead of most broker forecasts (they are averaging $70/ton in 2017), and that is allowing RIO to rapidly pay-down its debt.

I continue to hold a cautious view for iron ore into 2018, but concede 2017 is shaping up as a far better year for the miners than I and many others anticipated, so in the here and now, RIO looks reasonable value and likely to see $70 before too long.

CWN results today were let down again by the ongoing drag from last year’s China crackdown.

VIP turnover was -20% below broker expectations and down -50% on the previous year. Rubbing salt in the wounds, the punters won more than statistically they should have, but this will even itself out in the wash.

The regular ‘grind’ business for CWN in Melbourne was largely in-line, and encouragingly the non-gaming revenues at the newly refurbished Crown Perth were better than expected.

On the positive, CWN announced a second share-buyback, committing to purchase another $500m of shares (over 4% of the company), and we would expect this to continue to push the shares higher towards $14 in the months to come.

This week we saw a continued rebound in consumer confidence, which is encouraging. 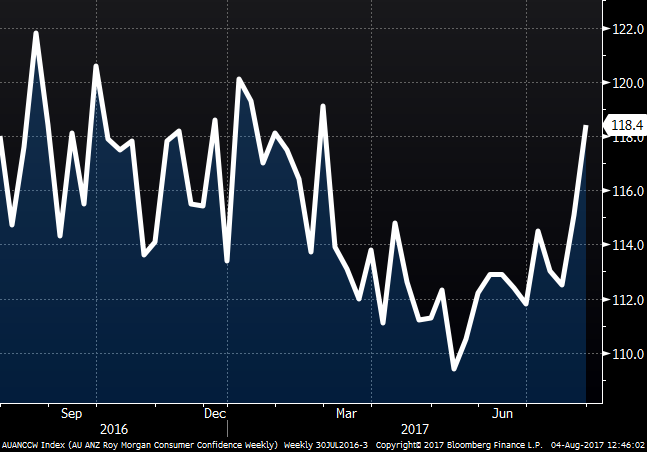 As you can see from the chart below, the last few years has seen a surge in new private dwelling construction, but year-to-date approvals have been down around 7-8% on the average through 2014-2016.

It is good to see last month’s approvals figures rebound back toward the average for the last few years, and might indicate a trough is forming there encouragingly.

Apartment construction approvals remain in a hole (-30% on three-year average), and look unlikely to rebound anytime soon given inventory and bank credit rationing. 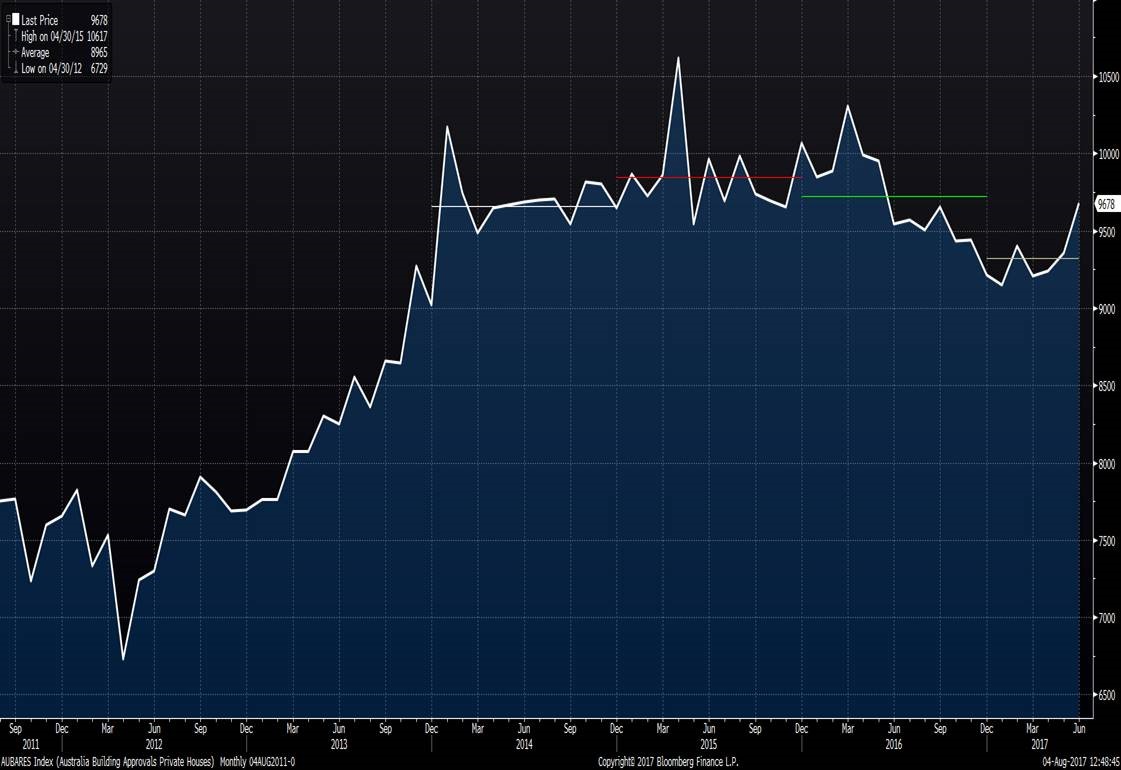 The RBA left rates on hold as entirely expected, but were more expansive in their views on the AUD, remarking that the currency’s rise would weigh on the outlook for output, employment and inflation.

And it will, which is why it’s a total pain in the neck for the RBA and for our economy that the AUD is as resilient as it is.

The strength in the AUD just further raises the degree of difficulty for the RBA in navigating   interest rate policy in the coming 12 months, particularly when consumer indebtedness and house prices are already making their job as hard as it has been in years.

For the foreseeable future, Australian rates are on HOLD.

I would go so far as to say that the next major test for the economy and indeed interest rates will come this time next year as we draw closer to a Federal Election.

Given the Greens negative-gearing policy announcement last week, and Labor’s likely support for a significant policy overhaul here, it seems the electoral polls next year will be as important for the future of interest rates, house prices and the economy at large as anything.

Apple (AAPL) posted some good profit figures this week, and rose around +4%.

The big driver for AAPL results was less what they did last quarter, and more about what they guided for in the coming 3 months.

AAPL forecast strong revenues in the coming period, in spite of some fears that the new iPhone 8 launch date had drifted from September into October.

The new iPhone 8 is widely seen to be a game-changing device in that sense that its functionality is being upgraded to allow the phone to be used as a standalone gaming mechanism in addition to its usual telecoms functions.

For more information on the above please contact Bentleys Wealth Advisors directly or on 02 9220 0700.