We have heaps to cover today, with reporting season having kicked off this week in size.

I will cover off on a lot of companies shortly, but first a quick snapshot on North Korea for context.

Markets came off rather heavily in the U.S on Thursday night in response to the North Korean situation, and deservedly too.

The prospect of military confrontation is clearly a risk, but in a market sense, it really is quite binary – either it will or it won’t, and even with the escalating rhetoric from both sides, the odds (gulp!) are still massively in favour of détente.

However, when taken in the context of high U.S equity valuations, a rapidly-approaching U.S debt ceiling (early September the U.S are seen to reach their legislated debt limit) and the commencement of Federal Reserve balance sheet unwind, it is fair to say that the market is finding increasing reason to book some profits.

Unlike Australia where share indices are flat on the year, in Europe, the U.S and North Asia share-markets are up between 5% and 20% and profits are there to be booked.

But for those looking for a dramatic sell-off (beyond -5%), short of military action, I think you will prove disappointed.

Last night we saw U.S consumer confidence return to a 16-year high, and in both Australia, China and Europe, economic conditions are good or improving.

The upside is proving more difficult to find, but the downside is equally uncompelling.

Whilst I remain wholly unconvinced in any sustainable Australian consumer recovery, there is no doubt that Aussie businesses are feeling a tailwind from foreign shores.

This week the July monthly NAB Business Confidence pushed to a 4-year high, and actual business conditions are seen at their best level since 2008.

I have attached a few charts below to demonstrate the dichotomy between local business and consumer confidence, as well as some pictures showing confidence in the rest of the world.

You’ll note that economic confidence in Germany has never been this strong. 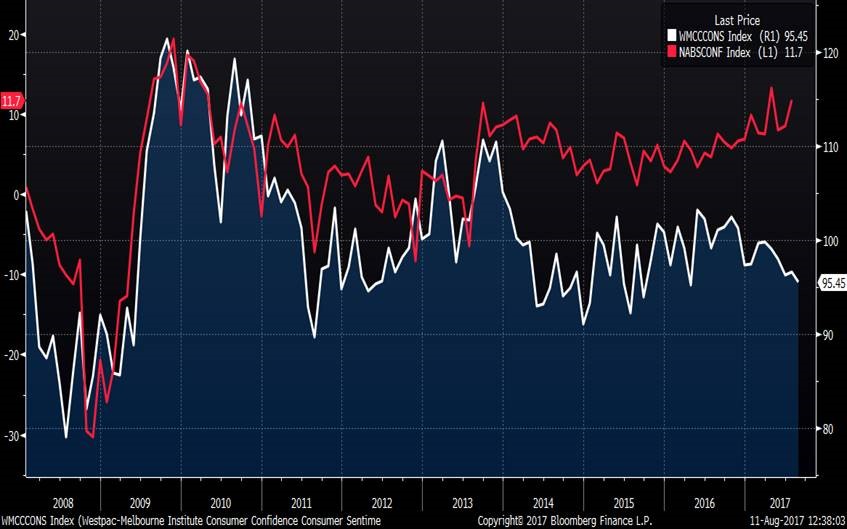 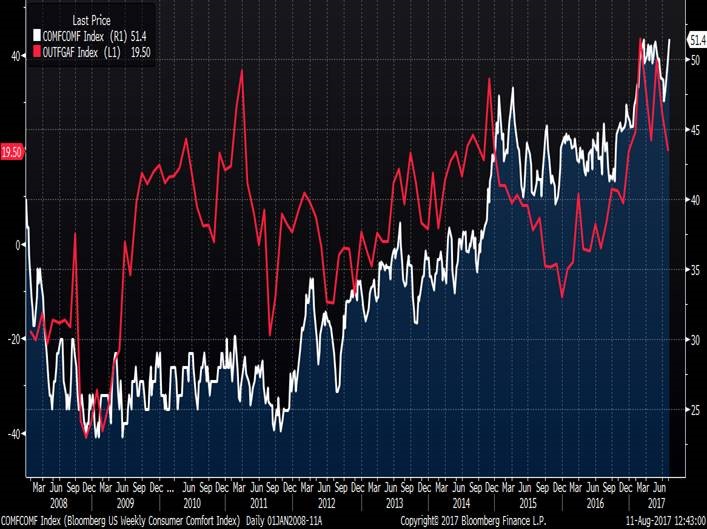 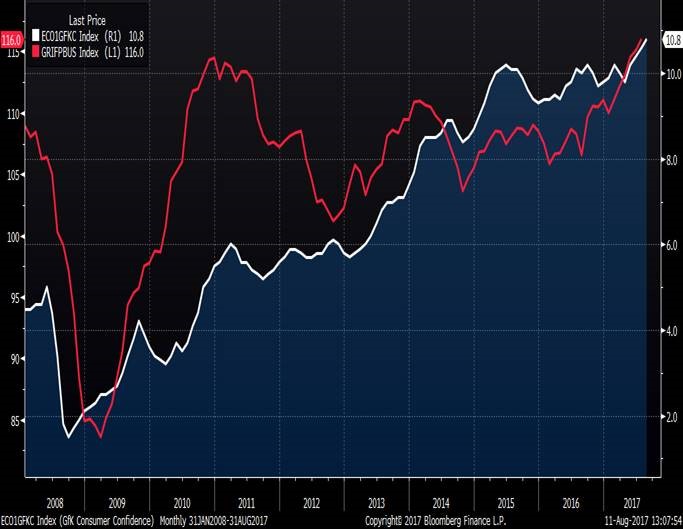 This week we saw a long list of companies reporting, many of which I will cover below.

Next week is even bigger.

I expect SEK to post some good figures given recent employment market strength.

On TLS it is super-difficult to judge, since mobile margins will likely remain pressured, but my hope is we see the company provide greater clarity on how it intends to monetize its NBN royalty stream, sending the shares for a long-awaited bounce.

The CBA results were fine, without being flashy. Profits beat by around 1%, and the declared dividend of $2.30 for the half was a shade better than forecast. Compositionally, CBA did 1% revenue growth, and continues to benefit from extremely low bad & doubtful debts (equal lowest level since 2007).

It’s this lack of revenue growth and continued reliance on a benign credit outlook that makes me question the need of investors to hold so much of the stock, particularly when it is on nearly 15x P/E.

Most analysts have barely 2% EPS growth per annum factored into CBA for the coming 3 years.

Insofar as the AUSTRAC case is concerned, it seems investors’ nerves were calmed by the realization it was one repeated piece of faulty software code that created the 50,000+ alleged breaches of law, meaning that though a large penalty will surely be paid, it will not be at the ridiculously high levels speculated in the press late last week.

MTR this week announced it had acquired the management and leasing rights to the Melbourne-based Art Series Hotel Group for $52.5m.

The deal looks to be a good one and gives MTR a new brand upon which to leverage, plus it uses up balance sheet capacity in an earnings accretive fashion.

The deal looks to be earnings per share positive to the tune of 5% or more, making MTR look increasingly cheap under $3.00.

Results next week are likely to be mixed, with strong resort performance set against a less encouraging performance from CBD assets in Perth and Brisbane. That said, the latter issues are well known and arguably set to improve.

PTM this week revealed a welcome stabilization in portfolio outflows during July, presumably in large part due to a much-needed uptick in performance from its two major funds, the Platinum International & Platinum Asia funds.

The Platinum International fund rose +18.7% after fees in the 12 months to the end of July, and eclipsed the +11.4% benchmark, helped in large part by bets taken across both Europe and Asia.

Though the Platinum Asia fund only performed in line with its benchmark, rising +17% in the past year, these numbers are encouraging and remind us of the knowledge base and skill-set still present within PTM.

This is relevant for PTM share-holders, but also for fund holders, and certainly timely given PTM’s intention to launch two new equity-managed funds on the ASX in the coming months.

TCL were sound, but there isn’t a lot to do here at current prices.

Traffic growth across their network remains good (2-4%) excluding Citylink which continues to be impacted by roadworks, however the latter will improve early in calendar 2018 when these are completed.

TCL’s dividend guidance for 56c in 2018 was about in-line with forecast, leaving the stock on a 4.8% dividend yield (only minimal franking), which is fine, but far from the compelling BUY we thought it was in the low $10’s.

TCL remain committed to Sydney’s road privatization and are a likely frontrunner for the West-Connex road sell-down there, but when coupled with its capital expenditure plans for the West Gate Tunnel, it seems inevitable TCL will again tap equity markets for ~$1bn in the months ahead, further pressuring the stock.

For more information on the above please contact Robert Flynn, Bentleys Wealth Advisors directly or on 02 9220 0700.