Equities bounced after several weeks of negative returns despite yields continuing to push higher. The S&P/ASX 200 outperformed with a 1.9% gain relative to the 0.7% gain for the MSCI World and 0.8% gain for the U.S. S&P 500. The domestic gains were driven by cyclicals again, with the energy sector (+4.6%) continuing to be the best performer as OPEC+ continued with its planned production increases rather than a larger move to alleviate the energy crunch. Healthcare (-0.1%) was the worst performing and only negative sector for the week.

It was another significant rise to yields despite disappointing U.S. employment data. Both the Australian 10-year and U.S. 10-year Treasury yields rose over 1.6% as inflation concerns return to headlines following strong wage gains and rising energy prices.

The U.S. employment data continued to show imbalances as more people continued to leave the workforce, driving the unemployment rate lower to 4.8% from 5.2% despite just 194,000 jobs added relative to expectations for 500,000. On the other hand, wages rose 0.6% month-on-month, spurring further inflationary pressures. Elsewhere, there was some relief evident in equity markets as Republicans offered to agree to a temporary reprieve on the U.S. debt ceiling.

Domestically, the Reserve Bank of Australia had their monthly meeting and as expected, refrained from making any policy changes. Meanwhile, the banking regulator moved to targeted measures in an effort to cool the housing market by raising the minimum interest rate buffer it expects banks to use when assessing the serviceability of home loan applications from 2.5% to 3%. At this stage, this would prove to only be a minor headwind for bank loan growth, but further, more restrictive measures could be forthcoming if the housing market continues to surge higher.

In corporate news, the takeover tussle for Australian Pharmaceutical Industries (API) continues as Wesfarmers (WES) moves ahead to acquire 19.3% of API from WSH Pattinson (SOL) at $1.38 per share, exercising the previously disclosed option. This comes several weeks into its due diligence period signalling that WES is likely to push onward with the takeover despite a competing bid from Sigma Pharmaceuticals (SIG).

This week, Australian employment figures are likely to remain weak given lockdowns in New South Wales and Victoria, but consumer and business sentiment will offer more insight into a potential bounce when both states start to reopen. Globally, U.S. inflation, Chinese trade and Chinese liquidity readings will be of particular interest for markets.

In recent years, there has been a belief that inflation is a thing of the past. Despite decent economic growth, low unemployment rates and massive monetary stimulus in the decade following the financial crisis of 2008, inflation remained weak. This year, inflation has come roaring back but investors have largely brushed off concerns, citing base effects and transitory factors until several weeks ago. Now, investors are fretting over inflation not being as transitory as initially thought. 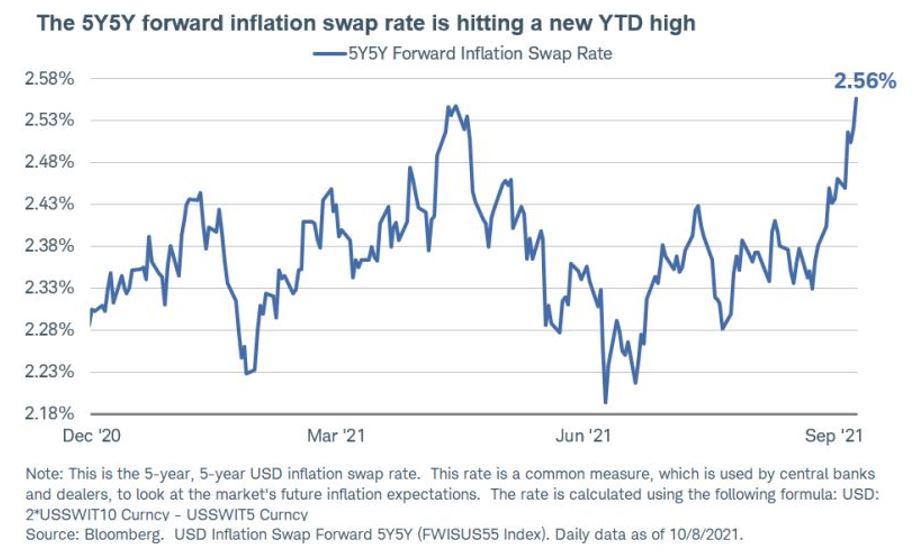 On top of this, economic data across major economies have been disappointing in recent months. The slowing growth coupled with not-so-transitory inflation concerns have led to concerns that we may be entering a period of stagflation, where weak economic growth and high inflation erode standards of living. 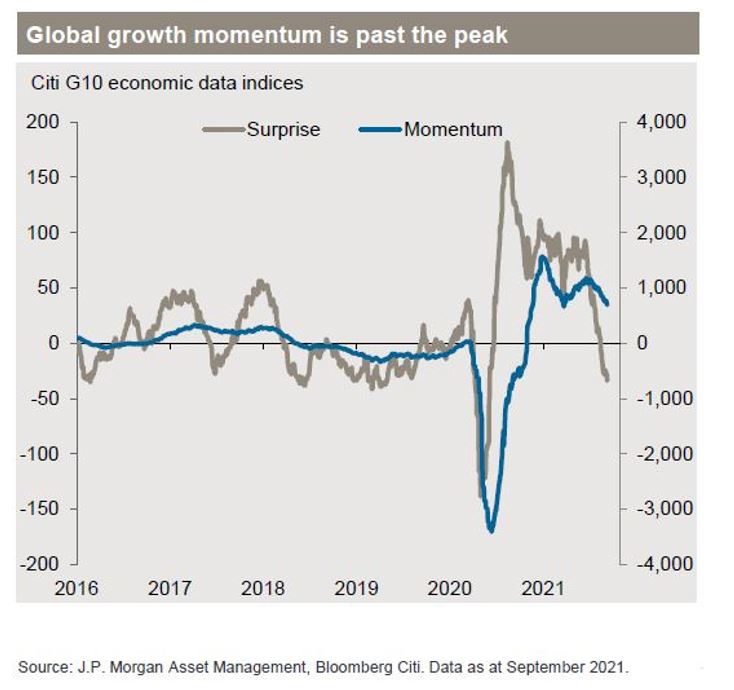 However, as the chart above shows, economic growth momentum remains strong despite the disappointing surprise index. The surprise index measures actual data versus expectations, with the negative reading meaning that recent economic data has been disappointing relative to estimates. On the other hand, economic momentum remains firmly in positive territory, meaning that economies continue to grow overall.

Thus far, the global economic recovery has predominantly been driven by above trend growth in manufacturing and physical goods while services remain well below pre-pandemic levels. The recovery in services has been side-lined by the impact of the delta variant, but this should support economic growth as the delta wave subsides.

As a result, though there is now a higher probability for stagflation than we have seen in recent years, we think that it is more likely to see global economies go through another period of reflation, whereby economic growth is strong alongside moderate inflation. What does this mean for investors? Periods of stagflation have been hugely negative for both equities and bonds, whilst reflationary periods have been kind to investors, with value and cyclical exposures tending to outperform as they did between November 2020 and March 2021.