There were a bevy of earnings reports over the week. Altium (ALU) reported figures in-line with its recent downgrade but the CEO was confident of a much stronger half, noting early signs of growing momentum. Whilst ALU expects a pause in earnings growth this financial year as it repositions to go all-in on its cloud offering, it continues to target a doubling of earnings by 2025. We note that ALU expects margins to remain pressured over the next year whilst it pivots to its cloud strategy, which may keep a lid on its share price in the near term.

Mining giants BHP, Fortescue (FMG) and Rio Tinto (RIO) all reported strong profit results and much bigger than expected dividends this week. BHP also said that it was still looking to reduce its coal exposure as it continues to shift its focus to future metals. Meanwhile, FMG announced the departure of three senior executives amidst a blowout in costs for its much-vaunted Iron Bridge project.

Three of the big banks also reported this week. NAB, Westpac (WBC) and ANZ all posted much stronger than expected cash profits as loan loss provisions came in much lower than expected across the board. It was a good week for the big banks, with strong outperformance over the market as they reported significant progress on both housing and business loan deferrals with very strong Capital Equity Tier 1 ratios, well above regulated requirements, sparking hope for buybacks or special dividends once they are allowed. Perhaps the most surprising of all were the strong net interest margins which may indicate a bottoming of profit margins, though most analysts are expecting these to fall again as competition for new loans heats up.

Coles (COL) also had a strong report but was heavily sold off on a weak outlook. With the business set to cycle the effects of the initial COVID lockdown last year, COL expects negative sales growth over March and April as it laps the pantry stuffing period. The slowdown in January sales growth rate to low single digits was also below expectations and could indicate a return to the 3-4% pre-COVID run rate as opposed to the scenario that some of the eating-in habits forced on by COVID would be here to stay which would help COL keep sales growth around the mid-single digit mark for some time.

Big healthcare names CSL and Sonic Healthcare (SHL) both posted strong reports. CSL’s was initially well-received as its influenza vaccine business, Seqirus, posted an exceptional half, whilst Behring also impressed on lower costs. However, after a day to digest, CSL gave up all its gains as analysts expect a much weaker second fiscal half, noting that there was no upgrade to guidance despite the first half posting about 80% of the full year profit target.

SHL had a big 166% rise in profits but strong earnings were expected given that the business continues to benefit from elevated COVID-19 testing volumes. The interim dividend disappointed many investors expecting to see a larger portion of profits returned in cash. It was a good result overall, with the company noting that the base business had nearly fully recovered, sitting at just 1% below pre-pandemic levels. Whilst no guidance was given, we still expect SHL to benefit from elevated testing volumes through to at least the end of the year.

Another one of interest for us was the Bapcor (BAP) result, with a strong report as it continues to expand its location network and progressing its new Tullamarine warehouse. The stock was knocked lower despite beating estimates and noting that trading conditions remain strong, but given the operational strength of the business, we remain positive on the company.

Elsewhere, Wesfarmers (WES) had a strong result driven by strength in its retail businesses, Dominos (DMP) smashed earnings expectations again as global demand for food delivery remained strong, and other retail names such as Super Retail Group (SUL) and Breville Group (BRG) also posted earnings beats. Energy names in Origin Energy (ORG), Santos (STO) and Woodside Petroleum (WPL) reported, with all having a hard first half owing to weak energy prices, though all are likely to post much stronger second halves given the rebound in oil prices.

Employment recovery, almost a round trip

Stepping back from the earnings season, Australia reported employment figures last week. Though the headline number disappointed, it was positive to see that the number of full-time jobs added was much stronger, indicating that there was a conversion of part-time jobs to higher quality long-term full-time employment.

Whilst the unemployment rate remains well above the pre-pandemic rate at 6.4%, a separate measure of employed people is just 64,000 lower than the February 2020 peak. The number of people employed currently stands at 12,939,900 people versus the 13,003,900 employed last February. 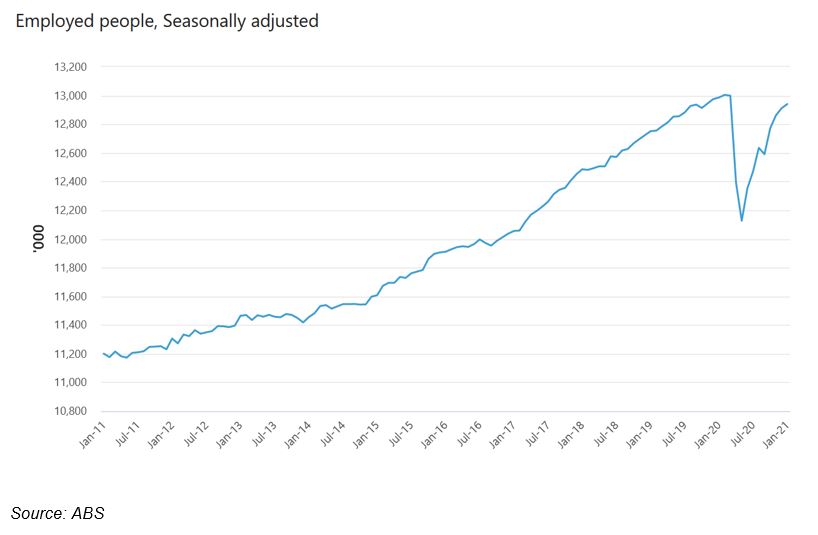 With job advertisements continuing to grow and other indicators of economic activity such as business confidence and Purchasing Manager Indices remaining firmly in positive territory, the number of people employed may exceed pre-pandemic levels within a couple of months.

The domestic earnings season continues with another busy schedule for the week ahead with Woolworths (WOW), Sydney Airports (SYD) and A2Milk (A2M) among those reporting. We also get U.S. personal spending figures that are expected to be strong given the recent stimulus cheques, plus potentially further progress on the new round of stimulus as we inch closer to the deadline for the unemployment benefits boost from the last round.