Markets were in risk-off mode as equities fell and bonds rose. While the omicron variant was making headlines, the sell-off was likely driven by the U.S. Federal Reserve (Fed) and Chairman Jerome Powell’s comments around ‘retiring the word transitory’ when talking about inflation plus the possible acceleration of tapering. Although the Fed members had already been signalling the move towards a more hawkish stance, these comments sparked a sell-off in the extremely high growth names trading on high multiples on revenue that had done so well in 2020.

The MSCI World fell 1.3% while the U.S. S&P 500 fell 1.2% last week. Australian equities outperformed with the S&P/ASX 200 index down 0.5%. Like global equities, growth sectors led declines with Healthcare down 3.2% and Technology down 2.5%. Consumer Staples also lagged, falling 2.8% for the week. Cyclicals were the best performers, with Materials up 1.3% as iron ore prices staged a bit of a rebound, while Financials were the only other sector to finish higher, up 0.6%.

The risk-off mood suggested that economic data took a back seat as largely positive activity surveys across both manufacturing and services for Australia and the U.S. failed to lift risk assets. Australia also posted a stronger than expected GDP of -1.9% for the lockdown-impacted third quarter. Expectations were for a contraction of 2.7%. The post-rebound lockdown also looks promising, with retail sales rising 4.9% between September and October. It was not all good news on the economic front though, as the U.S. had another disappointing employment report. Just 210,000 jobs were added compared to the consensus estimate of 550,000. The unemployment rate fell to 4.2% but this was driven by continued weakness in the participation rate, which remains well below pre-COVID levels.

Turning to corporate news, Premier Investments (PMV) saw a reopening boost as sales rose 10.1% year-on-year for the same three-week period to November 27, partially offsetting the impact of earlier lockdowns. Sales over the 17 weeks to November 27 were down 3.5% year-on-year. Overall, it was in-line with expectations and sales are expected to recover further as we enter the seasonal shopping period.

It was another busy week on the M&A front, with the BHP board approving the U.K. delisting and the expected cost being revised down to $350-450 million versus previous expectations for $400-500 million. Wesfarmer’s (WES) takeover of Australian Pharmaceutical Industries (API) takes another twist as Woolworth’s (WOW) enters the fray with an offer of $1.75 per share, a 20% premium to the offer from WES.

This week, the Reserve Bank of Australia will have its usual policy meeting but is unlikely to garner the same scrutiny as the Fed’s meeting next week. Chinese trade data and U.S. inflation figures will be of more interest to global markets, especially the latter as high growth equities are on the ropes.

We saw the extremely high growth stocks tumble last week as inflation was deemed no longer transitory by the Fed. If it is indeed so, history has shown that periods of rising inflation have led to periods of lower valuations, as measured by the price-to-earnings ratio. 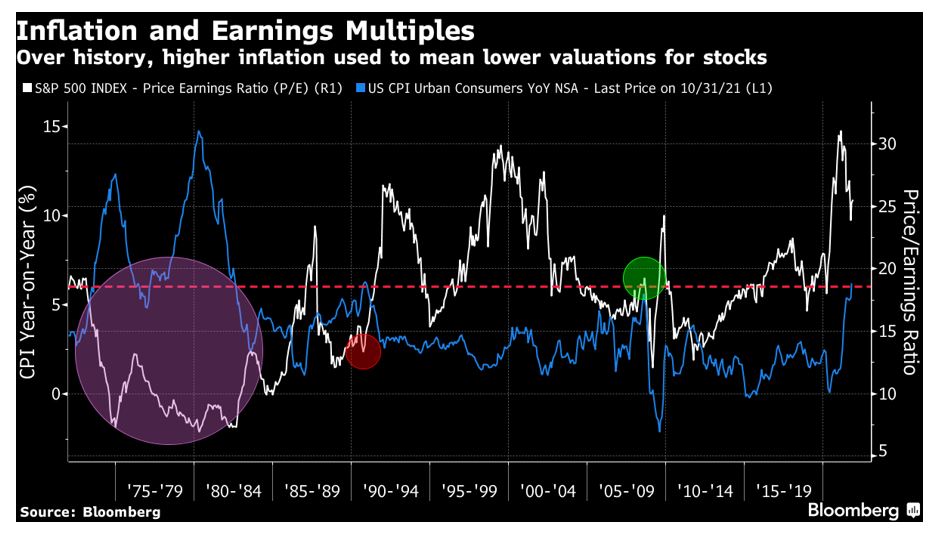 This would mean a likely shift in market leadership as the past decade has been driven by growth companies that have seen multiple expansion more than earnings growth. We have written several times about inflation in previous updates and will not dwell too much on the topic this time, only noting that we expect medium term inflation to be higher than the last decade’s averages but unlikely to remain at such elevated levels as we are currently seeing globally. Assuming the relationship above holds, this would see another period of outperformance for value over growth as multiples contract.

However, this does not necessarily mean a period of negative returns for equity investors because earnings tend to rise in periods of rising inflation and helps to mitigate contracting multiples. 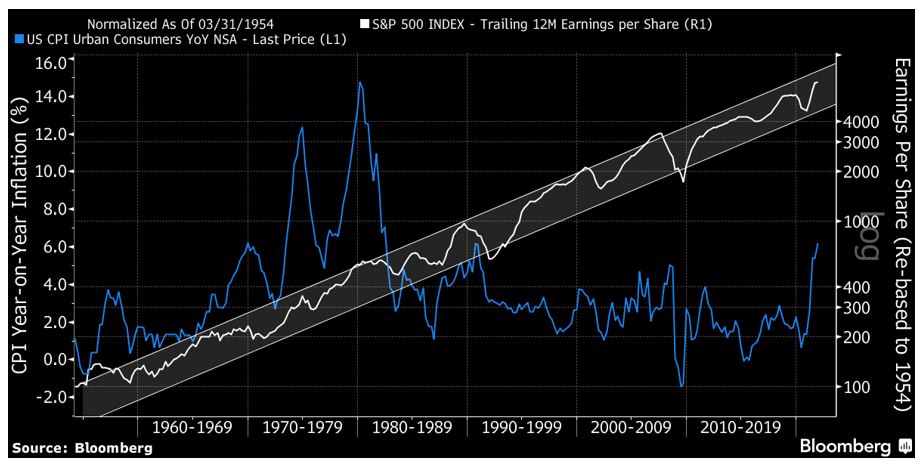 This supports our largely neutral stance on equities at this stage despite our expectations for more volatility moving forward. Although the past few weeks have seen a move lower for equities, at this stage, we see this as a healthy correction and do not expect to see a prolonged bear market in the absence of a recession. While COVID variants and central banks tightening too quickly are among the major risks to this view, we do not think that the probability for these factors to derail the global recovery is high enough to shift our neutral stance at this stage.