Equities had a strong start to June, driven by a rally in energy, whilst bond yields were largely stable despite major economic data releases such as PMIs and U.S. employment figures. The S&P/ASX 200 outperformed with a 1.6% gain, led by energy as the laggards caught up after OPEC reiterated that it would take a slow and measured approach in rolling back production cuts. The energy sector rose 8.5%, driving the bulk of gains, whilst technology was the only sector in the red, falling 1.1%. On the global front, the S&P 500 and MSCI World both rose 0.6%.

Australian GDP figures released last week was better than expected, with the economy growing by 1.1% over the first quarter last year. The growth momentum is likely to continue, with PMIs, also released last week, continuing to show strength, albeit the bulk of the surveys were done prior to the latest Victorian lockdown.

In corporate news, Wesfarmers (WES) told investors that its retail businesses continue to see resilient demand, though year-on-year growth had generally moderated due to elevated activity in the prior year. REA Group (REA) announced that it was selling its Malaysian and Thailand businesses to PropertyGuru for an 18% stake and one board seat, a move that was positively greeted by investors after several years of disappointing performance from those regions.

IOOF (IFL) also announced the completion of MLC and expects to deliver a run-rate of between $65 million to $80 million of the estimated $150 million in cost synergies by the end of FY22. Investors initially shrugged off the long-expected news on the announcement date but a strong rally started the following day. Whilst this removes a point of uncertainty, IFL’s ability to deliver on its promises remains key. If it can show progress quickly and deliver synergies whilst keeping outflows contained, valuations look cheap. However, such large acquisitions in the form of ANZ P&I and MLC also represent large execution risks that could lead to significant value destruction. Let us hope IFL does not go down the same path as one of its peers. For now, given the bottom or close to bottom-of-cycle acquisitions and IFL’s track record of integrating acquisitions, we remain positive on its ability to execute but are likely to trim as it continues higher in order to manage risks.

For this week ahead, business and consumer sentiment are the highlights for domestic economic data. Job ads are also likely to indicate ongoing strength in the labour market, though we may see some of the impact from the Victorian lockdown. Globally, U.S. inflation figures will be of grave importance to investors after last month’s blowout.

Values rebound – can it continue?

There has been a significant rebound in the so-called “value” bucket of equities since November. Value is now outperforming growth over the past year and investors are wondering whether it can continue. 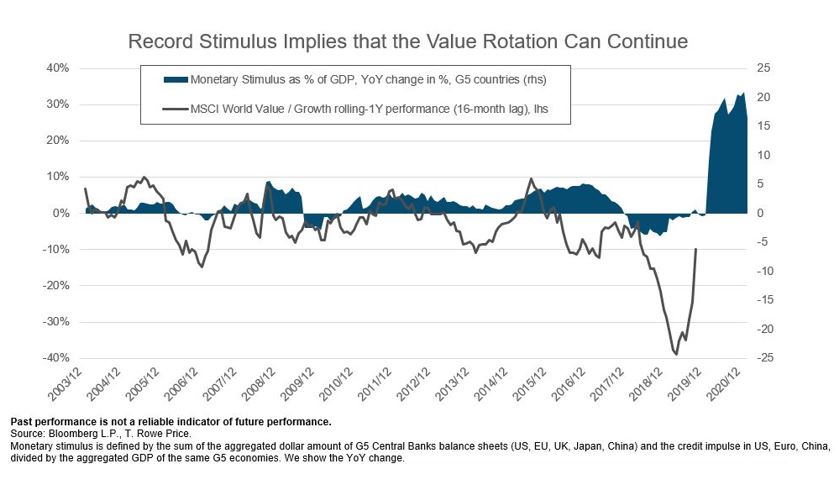 This first chart implies that there is still some room for Value to outperform, owing to both its huge underperformance since 2016 and the significant stimulus over the past 14 months. It makes sense as significant stimulus pushes economic growth to accelerate or recovery, leading to higher profits for the cyclicals who are more sensitive to the economy. These cyclicals are largely categorised as value, unlike tech and healthcare that tend to sit in the growth camp.

This second chart addresses inflation, the crux of recent market jitters. Value is the only factor that tends to do well when inflation expectations rise. Again, these are linked to the fact that cyclicals such as the energy and materials sector sit in the value camp, whilst financials tend to benefit from rising yields that are driven by inflation expectation.

With economic data continuing to point towards a strengthening global economy and inflationary pressures, we remain positive on the value factor in the near-term and have been incrementally adding exposure since November in both our Australian and International Equity portfolios.